The book is a documentation of the public health and humanitarian crises in the wake of the COVID-19 pandemic.

Sunita Narain, director general at the Delhi-based Centre for Science and Environment (CSE), has brought out an edited volume titled The Pandemic Journal: A prologue to a world that would never be the same again. (CSE, 2021). 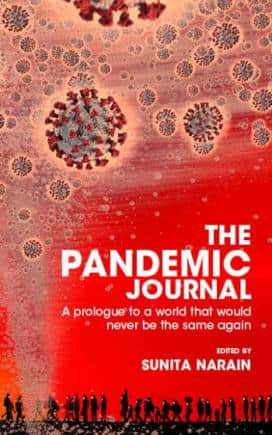 of the COVID-19 pandemic – exodus of workers from India’s cities, breakdown of global supply chains, vaccine chauvinism, and the struggle to find medical oxygen – with the purpose of remembering in order to build back better.

We bring you six takeaways from this book:

1. A blow to the informal sector

According to this book, after a nationwide lockdown was announced on March 24, 2020, to contain the spread of the SARS-CoV-2 virus, 125 cities/towns reported outmigration. Millions of workers in the informal sector set out for their villages. It was not the fear of COVID-19 that triggered this large-scale migration but the fear for survival without money, food and work. Unfortunately, this return to their villages did not always bring solace and safety as the poor continued to face uncertainty and a bleak economic future.

2. Damage to the agrarian economy

The timing of the pandemic was cruel. This book reminds us that from the beginning of February to the end of April, farms and forests yield crops that ensure critical flow of cash for rural households. Praveen Parmar, a farmer from the Sehore district of Madhya Pradesh, is quoted as saying that his distress was caused by poor planning and not the crop cycle. The government had not procured food grain before announcing the lockdown, so farmers struggled to find space for storing wheat. Spoilt grain meant huge losses to them.

The pandemic exposed inequality that lies beneath the interconnectedness that globalization celebrates. As countries scrambled to provide medical essentials, the pharmaceutical industry’s reliance on China and India for the bulk of production became clear. While countries in Europe and North America banned export of masks and protective equipment to put their own people first, they were able to get active pharmaceutical ingredients from India citing humanitarian grounds.

As hospitals devoted themselves to fighting the COVID-19 pandemic on a war-footing, people suffering from other life-threatening diseases got neglected. This book points out that India accounts for approximately a quarter of the world’s tuberculosis burden, and data from the Union government’s Nikshay portal shows that the total number of TB cases notified each month came down drastically during the lockdown. When there is such a delay in identifying new cases, family members of the person with TB are at great risk of exposure and infection.

5. An increase in poverty

India was a land of contrasts even before COVID-19, but economic disparities became really stark when pandemic-related statistics emerged. This book points out that India added 40 new billionaires in 2020 while the pandemic stalled India’s progress in poverty reduction since the 1970s. Apparently, the last time that India had reported an increase in poverty was in the first 25 years after Independence. According to the Global Multidimensional Poverty Index (2019), India lifted 271 million citizens out of poverty between 2006 and 2016. In 2020, the highest global poverty increase happened in India.

This book quotes a position paper from the All-India Peoples Science Network, which highlights that rich countries with 13 percent of the world’s population purchased over 50 percent of the scheduled vaccine production. The inequitable distribution of vaccines held up a mirror to the power imbalances in the world. Rich countries and their pharma companies were pressurized into sharing vaccine technology with manufacturers around the world but they were reluctant to do so, prioritizing profits over public health. As the global hub of vaccine production, India had to take the lead along with South Africa to advocate for the suspension of patents on products required to control the pandemic, including vaccines.