Review | 'On the Verge' is all about the messy 40s

Wipe out your memories of ‘Sex and the City’. Welcome the hot mess that’s the 40s and 50s in Netflix’s ‘On The Verge’ helmed magnificently by Julie Delpy.

French actress Julie Delpy (above) created and wrote 'On The Verge' with co-actor Alexia Landeau.

In Los Angeles at least, 40s are the new 30s. As French actress Julie Delpy would make you believe in the new Netflix show On The Verge, created and written by her and co-actor Alexia Landeau, women who had envisioned meaningful or grand lives for themselves in their 20s and never reached that dreamy pinnacle, can have messy but still uplifting lives. And thankfully, the writer-actor steers clear of the cliché that wisdom comes only with age. The tween children of the four protagonists are more accepting of their existential hurdles than their desperate parents.

It is a show about four women—a chef, a single mom, an heiress and “former feminist”-turned-job seeker—who dig into life and work to actualise success as they see it, while manoeuvring the rude shocks and life-changing epiphanies of midlife crisis in pre-pandemic Los Angeles.

We meet French chef Justine (Julie Delpy) ensconced in a comfortable and busy life with her husband Martin (Mathieu Demy) and a precocious, adolescent son. Her refuge from the drone of laments and regrets of her idealistic, very French architect husband is her kitchen at a restaurant that she runs with Jerry (Giovani Ribisi), another oddball grappling with depression and gut inflammation.

Her succour and laughs lie with her three besties—Yasmin (Sarah Jones), a mom of another all-knowing pre-teen boy, who yearns for lost professional glory and gets enmeshed with a secret operative through a cousin from her Iranian lineage; Anne (Elizabeth Shue), whose life as a mom to her adolescent son, lover to a much younger man and as a fashion designer is the result of a dole from her millionaire mom; and Ell (Alexia Landeau), a mother of two sons and a daughter from three different fathers, who is in need of money and desperate measures to stay afloat.

All the lovers, husbands and ex-husbands are as dysfunctional and as lost as the women, but it is primarily an intricate California slice-of-life about women and their confusing, chaotic middle-life psyches.

Directed by Julie Delpy, David Petrarca and Mathieu Demy, On The Verge is suffused with everything French. Delpy mocks Frenchness as well as revels in it. The humour is politically incorrect and characters have an absurd, silly and at the same time, self-righteous streak. Yelling at a bullish child in an LA park, calling the homeless “crazy and angry”, using Yasmin’s Muslim-ness for an easy segue into top-secret “carpet export businesses” and vague spy connotations—there are some shocking, unpalatable and some genuinely funny antidotes to woke-ness. Think tactless French in possibly one of the world’s most woke places, suburban LA.  The character of Yasmin does not come across as authentic—the writers seem to be at pains to get her Muslim-ness right, but on screen the effort translates to just a lip-service to character diversity that we are seeing a lot of in the stories coming out of Hollywood.

Delpy holds the centre together, she is really the voice of the show—self-deprecating and at the same time, rivetingly original in her pursuit of newness and new meaning. As an actor, she has amazing range (Before Sunrise, Two Days in Paris) and in the character of Justine, she has channeled her own ideas about feminism, millennial placidity, romance, fame, diet-consciousness, middle-age and human connection. Shue, Jones and Landeau are also immersive in their roles, bringing out the full spectrum of emotions, vulnerability and the prejudices and hypocrisies inherent in their characters.

In the early 2000s, the glamorous women of HBO’s Sex and the City introduced a kind of screen camaraderie among best friends in their 40s and 50s that hadn’t been explored in television before. It projected middle-aged women with impossible standards of beauty, glamour, brand-consciousness and sexuality. If Sex and the City was aspirational in a shallow way, On The Verge dives straight into the confusion and uncertainty of middle-aged women without losing sight of the possibilities of connection, fulfilment and success that this stage in life can bring for urban women in a world that celebrates youth more than even a decade ago. Still, middle-aged women are a heavily under-represented age group in filmmaking in Hollywood and all over the world.

On the Verge doesn’t break new ground, but Delpy and her actors know their ground perfectly well. 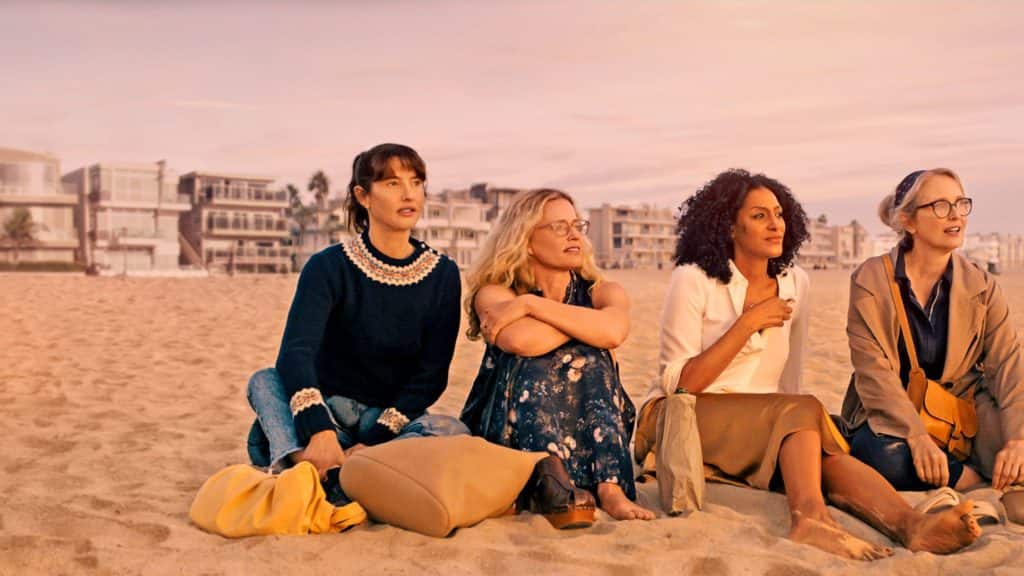