Nomadland review: Discover yourself in this Oscar-nominated film about 'houselessness'

As I watched 'Nomadland' unfold in front of me, I too began to yearn for a place not bound by four walls and years of mortgage payments

Frances McDormand is nominated in the Best Actress category of the 93rd Academy Awards, for her role in 'Nomadland', releasing in Indian theatres on April 2.

Nomadland releases across India on April 2 after winning hearts and accolades the world over. Written and directed by Chloé Zhao, the film is now a contender for the Academy Awards. The film has received six Oscar nominations: best director, best adapted screenplay and best editing for Zhao, best actress for Frances McDormand, best cinematography for Joshua James Richards, and best picture.

Although my heart has been given to Mank for the best movie of this year, I understand why Nomadland makes inroads into my soul. Every frame is a tribute to the beautiful land that is America. The cold, snow-clad Nevada, the California-Arizona desert sunsets, the stunning badlands of South Dakota and, yes, the magnificent Californian surf pounding away at the rocks.

Who wouldn’t want to just be a nomad? And should this not be a stunning documentary?

To understand a little about how America grew around Gold Rush towns, you don’t have to go farther than truly understand the lyrics to Mark Knopfler’s Telegraph Road. Many mining towns simply died once the ore was gone. In the film, Fern (McDormand) has lost not just a husband to the recession, but her entire existence has just been eaten away by the economic downturn. Imagine living in a happy white picket fence neighbourhood one day and then slowly watching the houses and businesses close down and boarded up the next.

The film has just started and I’m stunned to see Frances McDormand - pain writ large on her face - put away her belongings in a public storage. As she drives away to Amazon’s distribution facility, we are introduced to Linda May who tells her how she too is a van-dweller and Fern needs to understand what her life entails.

Living out of a van, that has been transformed into a tiny mobile home? Sound like something someone eccentric would do. But Fern does not look eccentric. She looks like she’s in mourning for a husband and a home, and she’s trying to work things out.

She’s not alone. We learn about van-dwellers and I did feel a tinge of guilt for having cursed the slow-moving RVs on highways when I simply wanted to drive my Montero to the next national park the fastest. Nomadland is about the attempt to find that place where you can catch some stardust and breathe in peace.

The film mixes real life people who are living on the road in their vans. We meet people like Linda May who decide to live on the go simply because the great American social security would be peanuts even after she had worked since she was 12 years old. There are veterans suffering from PTSD who cannot live with the noise in the cities any more, there’s Swink who is mourning her family, and yes, the YouTube star in real life - Bob Wells - who encourages more people to go find themselves and helps thousands who have chosen to live like Nomads.

Now the concept is not new to us in India, because we have many tribes like the Banjaras who move from place to place, looking for work, and living under the stars. But to see Fern live in her van and work through her grief is a revelation.

Bob Wells preaches at the Rubber Tramp Rendezvous (it actually happens in real life and more than 1.5 million people visit the event that happens at Quartzsite, AZ) in the film, telling us how living like a nomad is a lifestyle choice.

‘We live our lives under the tyranny of the dollar...We’re like workhorses, working ourselves to death...Until some day we are put to pasture….’

Fern listens as someone confesses: my friend died working, never having ever used the boat parked in his driveway. I did not want that to happen to me.

The film rests on Fern’s quiet, sometimes seemingly defeated, shoulders. She’s still connected to her past, carrying plates that her father got for her, photos from her childhood but undefeated in her search for something.

‘He was in so much pain,’ Fern talks about her ill husband, ‘That I sometimes wanted to put a finger on that morphine drip and help him die.’

Death and grief mark her face and yet we don’t see her howl at the moon or anything overly dramatic. The leisurely pace of the film and the close ups of the motley cast of nomads transport you to the place where the elderly nomad went kayaking.

‘There were hundreds of swallows flying over my head as I kayaked...their eggs had just hatched and when I looked in the water and noticed the eggshells… I saw the birds reflected in the water. It was like I was flying too. That moment I could have happily died…’ 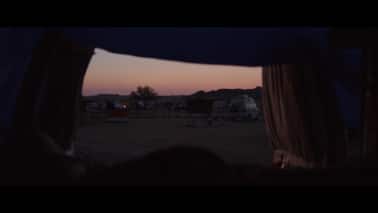 A scene from 'Nomadland', nominated for six Oscars.

The quietness of the desert reaches out to the viewer, pulling you down beside Fern who likes sitting in that folding chair outside the van. Life has never been filmed so simply.

As an empty nester, I too have found myself looking at photographs just like Fern. Those moments remind me again how we too have locked away a greater portion of our lives in memories called photographs. By the campfire light in the Black Rock Desert or light from the hurricane lantern inside the van, Frances McDormand shows us how brilliant an actor she is. Not once does she look lonesome. She is happy to meet van-dwellers and dance with Dave, but she looks just as content to be alone, watching all the other van people drive away.

The aloneness and the silences in the movie are part of the cast of characters in themselves. While you hear with empathy the stories of the people who have chosen to live like nomads, you also understand why Fern is able to say no to Dave’s offer of living in a house again.

In fact, it will make you look at your life’s financials again to check how soon you will be able to get away to the house on the hills you have always dreamt about. Fern’s moment of realisation that this is the life she really likes is so liberating, you want to go back to California and be willingly dwarfed by the giant redwoods again. It will be a humbling experience and an acceptance that Nature is magnificent and she will heal you.

This film will make you want to be a nomad yourself. And soon you will never want to say goodbyes, but, ‘See you down the road.’

Nomadland is releasing in some theatres across India on April 2, 2021.