Mumbai is a cinematic soufflé without a recognisable character or soul in this torpid adaptation of the original ‘Modern Love’.

Vishal Bhardwaj’s 'Mumbai Dragon' is an appetising ode to Cantonese cuisine and an unexplored Punjabi-Chinese camaraderie, at best. (All images: Amazon Prime Video)

It’s time we start considering the OTT anthology as a sum of its parts rather than vice-versa—disparate showcases of already-established directorial voices without the coalescing synergy of a vibe, an emotion or an idea. After all, the anthology, and the love anthology specifically, has become a safe, commercially viable and attention-grabbing slam-dunk for most streaming platforms. In India, it took off full-throttle during the pandemic when Amazon Prime Video dropped its first Indian original anthology film, Putham Pudhu Kaalai Vidiyaadhaa in Tamil, followed by Unpaused in Hindi. Both of them are post-pandemic productions, a series of stories about, the lack of and the transformative power of human connection amidst the devastating months of the pandemic years.

The latest, Modern Love Mumbai, is an adaptation twice removed from its original source. Amazon Prime released its first instalment of an adaptation of New York Times’ popular blog of the same name in 2019—a vapid screen translation of New Yorkers in pursuit of or touched by love and connection. The overall New York worldview that both seasons of the series project is saccharine, straightforward and starry-eyed—the setting, more a luminous canvas in the background rather than a character with its own agency in the human drama. The distinctive stories in both seasons were the ones in which the human vulnerabilities or foibles overshadowed the setting. Amazon India takes the weakest link of the original series, the setting, as the crux of its adaptation of six of the original blog’s stories. So the expectation from this series is for the city to be foil, facilitator and essence in each story. The streaming giant has announced more instalments to follow, where the setting will be other Indian cities, including Hyderabad.

The fatigue around anthologies, especially the love anthology, is real. It’s obvious the genre is a convenient way for production houses and streaming platforms to attract big names for less work and less production cost. The names then become hooks for audiences, making the anthology film a showcase rather than a portmanteau in the deeper, heftier sense of being informed by a thematic link. A meal of hors d’oeuvres can be gratifying, and some anthologies are similarly so—like Netflix’s Easy (2016), which is a more authentic and enjoyable dip into modern love than all the different version of the titular series so far.

Going back to the pre-streaming era, the anthology and the hyper-linked modern anthology film became a phenomenon among cinephile circles across the world as early as the 1990s when indie slayer of the deadpan bonhomie of subaltern Manhattan, Jim Jarmusch, orchestrated a singular, unifying vibe in two of them: Night on Earth (1991), about five stories set in Los Angeles, New York, Paris, Rome and Helsinki, united by nothing else but how nightfall traipses the fate of oddball nocturnal characters in all these cities; and later Coffee and Cigarettes (2003), which recorded in black-and-white and in painstaking detail, famous actors such as Bill Murray and Cate Blanchett playing out a long-suppressed itch or unease through conversations over routine partaking of caffeine and nicotine at a New York café.

In the second decade of the 2000, the anthology, a screen equivalent of the short story or micro-fiction, neither short film nor full-length feature, became a genre in itself. The examples are piling up by the year, especially with the streaming boom.

Most OTT anthologies leave me unsatisfied with the hors d’oeuvre plate, with more of an appetite for the main course, sometimes, as with the latest, Modern Love Mumbai (released on May 13), even annoyed at not being served a main course.

In its basic structure and premise, Modern Love Mumbai is closer to Paris J’taime (2006) - although much smaller in scale and scope. Paris J’taime had 18 films by 20 directors including the Coen Brothers, Gus van Sant,  Olivier Assayas, Tom Tykwer, Alfonso Cuaron and Alexander Payne set in various neighbourhoods of the French capital. It was, as most omnibus films with loose themes tend to be, an erratic, hit-and-miss affair, with Paris serving as a schematic, multi-ethnic backdrop without its physical or historical specificities.

In the six stories, roughly 40-45 minutes each, in Modern Love Mumbai, characters navigate the city’s geography and its demands in unsurprising, daily-grind kind of ways.

Alankrita Srivastav’s My Beautiful Wrinkles, which has Sarika in the lead role of Dilbar, a middle-aged single librarian struggling to find her sensual mojo, a window overlooking a promenade by the Arabian Sea is the only Mumbai signature; it is more about a woman reconnecting with the world, an earnest, unimaginatively-told antidote to ageism. 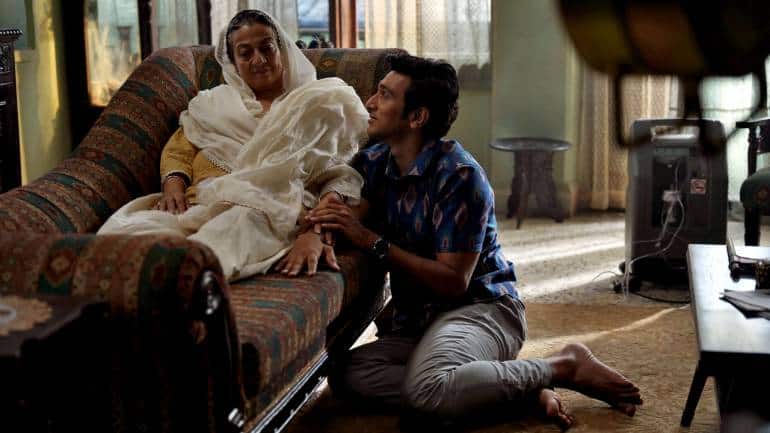 Tanuja and Pratik Gandhi in Hansal Mehta's 'Baai' - one of six stories in 'Modern Love Mumbai'.

Hansal Mehta’s Baai has his politically engaged signature, sympathetic to life on the margins of Indian society: A gay Muslim singer with a soulful, ghazal-inflected voice (Pratik Gandhi), scarred by the Gujarat riots of 2002 while he was a schoolgoing boy, has difficulty accepting his sexuality because he is somewhat toxically honour-bound to his grandmother (baai) played by Tanuja, and by extension, to his family.

Dhruv Sehgal’s I Love Thane with Masaba in the lead role is an accent rather than a story on a single landscape artist finding an unlikely match in a man who she meets while on assignment to build a park in Thane.

Vishal Bhardwaj’s Mumbai Dragon peeks lovingly into the life of a Chinese immigrant mom whose son is assimilated to life in the entertainment arteries of the city’s suburbs, but falls flat because of performances, working best as an appetising ode to Cantonese cuisine and an unexplored Punjabi-Chinese camaraderie.

Shonali Bose’s Raat Rani has a terrific performance by Fatima Sana Shaikh at its core in the lead character of Lali, a Kashmiri immigrant who works as a domestic help in an affluent neighbourhood and finds herself the hard way, after being abandoned in her rickety slum tenement by her husband. Cutting Chai, directed by Nupur Asthana, with Arshad Warsi and Chitrangda Singh in roles of the headlining couple, is about the dreary challenges of marriage and domesticity in the city—its treatment as pedestrian as the arc of its story, with a shockingly banal ode to Victoria Terminus thrown in. The last of the anthology, Cutting Chai also makes a pathetic attempt at hyperlinking the stories of the anthology before signing off with an awkward waltz by the Queen’s Necklace.

Since it is an anthology, a standout can’t be avoided: Shonali Bose’s Raat Rani is the most engaging because of the way the story, adapted from the source by Nilesh Maniyar, triumphantly weaves the city’s sounds, vistas and provincial niggles and cushions into Lali’s journey of self-discovery. In the lead role of Lali, Shaikh delivers the anthology’s most radiantly immersive performance. The storytelling has the compact density of a good short story, and the cumulative effect is a relaxed and ruminative, yet uplifting buzz in which the city and the character feed off each other.

But as a Mumbai film, Modern Love Mumbai is highly ineffective—in most of the stories, the city is a strain or a forced extension, depicted in grindingly clichéd ways.

Indians love love stories. The time is right for an original curatorial eye, a series creator who can distill a worldview or an idea through disparate characters and the wonderfully varied trajectories of romance and love in the sub-continent without losing the gaze on why they belong together.