Bobby Deol’s most ardent fans will agree that he is so much better in memes. Vikrant Massey and Sanya Malhotra compound this mistake by overacting.

Are we supposed to take this movie about honour-killing seriously? If yes, then why is the ‘killer’ of runaway couples walking about with a dead angry cat glued to his face, WhatsApping their dying photos to the families?

Wait a minute. The man has just hung ‘ghar ki izzat’ and her freshly married lad off a tree in the village. Why would he need to send photos as confirmation of the kill? The whole village will know the two are dead, innit? But if the killer is Bobby Deol, king of memes, then we suppress these questions and watch.

Pretty, perky girl Jyoti Dilawar - Sanya Malhotra - has run away to get married in court with a shy lad called Ashu Shaukeen who runs his father’s butcher shop. Father has been kidnapped by some bad guy and the cops haven’t figured out why. But they’re not important, the Lord of the Memes is!

To relieve the family of sin when a daughter or son are in a ‘bhagoda’ (runaway) marriage, they bring in Dagar the killer. Woo-hoo! It’s Bobby Deol replete with a wannabe Jason Momoa beard that ends up looking like he has a dead angry cat glued to his face. He has specialised skills too: Like Liam Neeson in Taken, he has ways to find these runaway couples and then kill them. Don’t ask where he gets the rope from or how he finds a tree for hanging the duo. He probably carries a jeepful of rope and villages in India provide the rest. Would have been fun if he took selfies with the dead kids, no? Too incriminating? Perhaps. Because technically the cops believe that he’s dead. But do the filmmakers care? Who is making this film? Bobby Deol fanbois? And if he’s playing cowboy killer, should he not be given two guns? Pew, pew!

You know that the filmmakers are desperately looking for John Wick, but in Haryana.

The most fun thing in the movie is the making of Dagar. He is the opposite of John Wick. As they say in Haryana, ‘Ulti khopdi’ (head screwed wrong). So no sleeveless leather tee (Soldier soldier), no bright orange jacket (ajnabi se mujhe pyar hai), no black puff sleeve cutwork shirt and diamante buckle for his belt (Humko sirf tumse pyar hai)... Dagar is dressed in what looks like a well-worn military surplus jacket (green) and skinny jeans (wrong for the boots he wears!) and has a leather strap going across his chest like he’s carrying a messenger bag or something, but there isn’t a bag for extra bullets (like in The Matrix), it’s for his gun. Bobby Deol style!

But Bobby Deol is no Alan Rickman in Die Hard. That beard is completely unflattering. It’s like the pointless pandemic beard allowed to just grow. Or is this his beloved feline fixed to his chin from some ghastly fight with some newlyweds? And who thought killers should walk about with leather boots that aren’t laced? On the whole, Bobby Deol’s stylist just worked too hard to make him look ‘carelessly casual’ as if they thought they were making him anti John Wick.

But I missed Bobby Deol’s intense close-ups of angry eyes and teeth gnashing (seen Baadal? Even Amrish Puri looks at him with love as he handcuffs him in the end!).

But back to the Love Hostel. 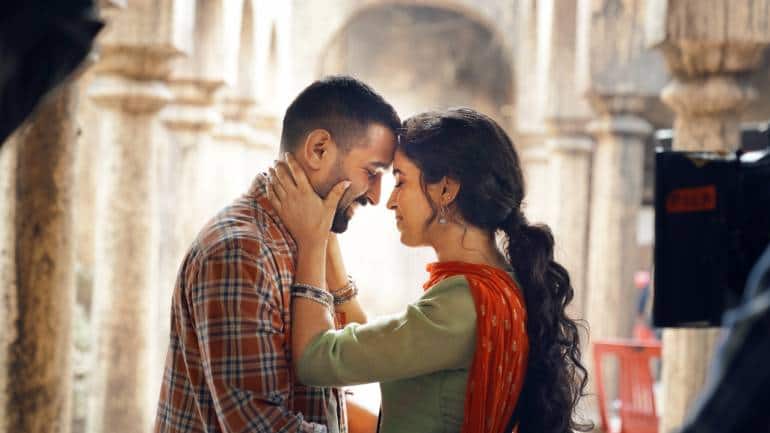 Ashu Shaukeen is actually Ahmed Shaukeen who has a blind mother left at a friend’s home (so he could run away) and a father who’s being tortured, because it makes the mysterious big bad guy scary. I don’t understand why they made Vikrant Massey play Ashu’s character either like a wuss who is scared of everything or someone who grins mindlessly. He’s a ‘delivery’ guy for some unknown big baddie, carrying drugs inside meat to men who live by guns. Too silly to see him crying for mom whilst looking into the mirror. His girl is pluckier, and is happy to tell him off and even make the first move. On his ‘suhaag raat’ Ashu is like, ‘Let’s make out after I finish the delivery and come back!’

The delivery scene in the hotel room was just needless bloodletting, and using Akshay Oberoi as just a driver? That’s sad. But I laughed when they parked so far away from the ‘Love Hostel’ and Dagar’s magic bullet kills from the side instead of the front, shatters the window and then kills the driver. Go Dagar!

But when you hear the two love birds say, ‘Love you, miss you, kiss you,’ I want to point them out to Dagar myself. I hope they paid royalty to singer Navtej who made that song into an Insta reels sensation. Jyoti is the new OTT heroine: gets mad at the man she married, knows how to carjack, is okay with blood spatters on her face (from people next to her getting shot), can escape from a noose but for nothing, really. Bobby is going to get them all. The cops have put Ashu and Jyoti in a ‘Love Hostel’ - a safehouse for couples who have married outside their caste and religion. There are other couples locked up here as well. Dagar, resplendent with cat beard, shows up at their lawyer’s home, kills them all and then comes looking for these two at the safehouse. Kills everyone, but these two escape.

Dagar follows and kills more people, gives some ‘gyan’ about Krishna showing his mother Yashoda the universe, and then kills everyone. But this gyan comes out of nowhere. And sticks out like a sore thumb among all cardboard cutout characters you’d see in UP/Haryana countryside: bad politicians, hookah smoking, little violent boys, women who tremble, panchayats, helpless cops, corrupt cops… Perhaps this one dialog could add some depth of thought. Oh yes, he gets shot in the stomach. But it’s Bobby Deol under that dead cat, so he gets a vet to remove the bullet (and as in all movies, the bullets always come out intact, no tissue or skin stuck to it).

How does this killing spree end? Does he drive away into the sunset, do we cue the ‘soldier soldier’ song again? No such luck. They show Dagar falling in love with a black lab puppy at the vet’s. So the plot moves forward in the upside down universe of Haryanvi John Wick, with the dog ending Dagar’s life.