Deepti Naval: 'In Hindi cinema you keep getting offered sweet mother roles... I run away from those roles'

Deepti Naval and Kalki Koechlin in a still from 'Goldfish'.

From movies such as Chashme Buddoor to Katha, from Mirch Masala to web series Criminal Justice: Behind Closed Doors, from recently publishing her memoirs to acting in the independent film Goldfish, Deepti Naval’s career is as textured and her life has been.

Alongside promoting her book A Country Called Childhood, she’s also excited about her latest film - an intimate drama pivoting around a mother-daughter relationship, that’s travelling to film festivals including the Busan Film Festival and the Raindance Film Festival.

Set in the UK, director Pushan Kripalani’s Goldfish deals with memory, identity, a woman, suffering from the onset of dementia and her relationship with her estranged daughter, played by Kalki Koechlin. 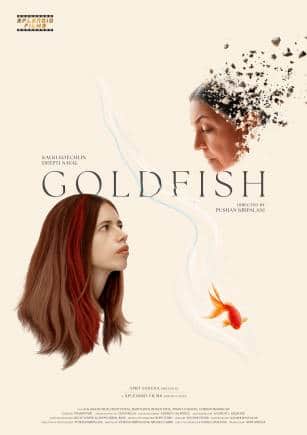 In a phone interview, Naval shared details of her latest filmed work and future plans.

What attracted you to ‘Goldfish’?

I have never explored this aspect, of a woman whose mind is slipping into dementia. I wanted to get into this part and explore it; how it feels. It’s a very interesting subject.

In Hindi cinema you keep getting offered sweet mother roles. And if you ask them who is this woman, can you define her, they usually say you know she’s a sweet mother, just like mothers are. I run away from those roles. I have not done those roles for a long while. I might have had to do them earlier, to keep money flowing in. But no longer.

There is a mindset that the woman doesn’t need to be defined, but who is she? Is she strong, docile, independent? The role needs to excite me. When I first read the script, I thought Arghya Lahiri had a very different way of writing. I had a thing about the dialogues, and I thought ‘oh, really, okay’. I was tickled by the way the dialogue sounded. But by the second or third day, I told him his dialogues are growing on me.

The film deals with mental health. Did you engage in any special preparation or research for the part of Sadhana?

No, I didn’t have to prep. I had seen my mother suffer through Alzheimer’s and a stage of dementia also, so for me it was intensely intimate. I’ve lived with it.

As we get old we do suffer, and dementia is one of the first signs of mental deterioration. I just took the role on from instinct. I felt I had some insight into this, although this woman is quite different from my personal experience.

This mother-daughter relationship is also quite different from my relationship with my mother. In the film, Sadhana is a strong, independent woman who has this estranged relationship with daughter Anamika, and I thought that would be interesting for me to explore as an actor. What are the themes that the film tackles?

It deals with how the new generation approaches the elders and how they think they should manage the ageing members of the family. My character has a sense of her self and is not doddering, but she is reluctant to go down a route where she is labelled. I think in 15 to 20 years, I will be that kind of woman who will refuse to accept that she is old.

As a NRI story, there also seems to be to an exploration of the idea of identity, which is something your memoirs also explore.

Yes, as an NRI you do hold on to your roots and your value system. Which can lead to a little bit of confusion. I played someone who went through something similar as Chaitali in Leela (2002).

The quest for identity starts very early on and I have lived with that all my life. As I was beginning to find my identity in India, the whole family migrated to the USA. In India I was writing poetry and essays in English because of my convent school education. But abroad, the same English becomes an issue. I start to feel we have our own languages - Hindi, Hindustani, etc., so I start writing in Hindustani to assert my identity. And then when I return to India, I go back to writing in English which is my most comfortable language. Of course I did overcome that complex. I love all the languages, especially Hindustani.

Language, identity, migration, displacement and holding on to your roots are the themes explored in the film as well, like my character holds on to her roots through her music, because she was a classical singer, and she finds herself through her connect with her music.

Besides the technical rehearsals, neither of us rehearses a lot. But once on set, we both come into our own for the shot. I loved working with her. I have great regard for her as an actor and among the younger lot, now she is one of the very exciting actors in India today. She has such a universal look. Her demeanour on camera is also very reassuring. I liked the way we worked together.

Yes, we had a very small unit and worked in two-three homes on the same street, going out of one house to the next and then to the church across the street to have lunch and change wardrobe. Like most of my cinema experience, this too was very sweet and informal, with the whole unit working together closely.

What else is keeping you busy?

The last five years I have hardly done any work as an actor because I was so busy trying to finish my book. I just did two web series, Criminal Justice and Pawan and Pooja, and Goldfish. Otherwise I have just been writing A Country Called Childhood. I have also just finished my next book. I am going to the USA and doing a book tour. I am so happy the book has been so well received. Now I am looking forward to taking on more acting assignments. This is a feel-good chapter in my life.