The Ferrari Roma puts the grand back in grand touring

Fast, ferocious and utterly beautiful to behold – the Ferrari Roma is a celebration of driving and a performance car for the ages.

The Roma shares plenty with the new Portofino M, or rather the Portofino M does with the Roma.

The last time I found myself scaling my way up the Jais mountain in the UAE, I had a raucous V12 roar serving as the soundtrack for what was simply a great day to be alive. A naturally-aspirated 6.5-litre power mill sat between me and an obscured horizon, and the ascent to the peak of the mountain played out like a frenzied dream sequence. Four years later, things appear to have changed. For one, the road, I’m told, is littered with speed cameras, for the other, Ferrari’s latest and much loved grand tourer has now joined the forced-induction brigade.

It feels like the dawn of a new era.

The Ferrari Roma is proof that in front of unparalleled beauty and grace, all sorts of power figures, g-forces, compression ratios disappear into the ether. It’s a car not to be seen but to be witnessed. It’s a properly pretty Ferrari grand tourer after ages and any accusations of derivative design work are binned the second you lay eyes on it.

With the Roma, Ferrari intends to evoke its glorious grand touring past with sharply tailored, cufflink-sporting race cars that had track-bred instincts but charm school mannerisms. Underneath that fantastically proportioned form lies a 3.9-litre, twin-turbo Italian V8 that makes 612 bhp. So yes, the Roma might be enchanting to behold, but underneath it all it’s still a firebrand Ferrari.

Ferrari designer Flavio Manzoni has clearly relished penning the Roma’s form. The tapering headlamps, body-coloured, semi-opaque mesh grille all point to new design trends which I prefer far more to the oversized grille affliction that’s ailing many modern designs. In fact the Roma’s old-school minimalism is a welcome change of pace. In fact, unlike its competition

which is too eager to look like track weapons, the Roma is all about visual serenity.

The baritone V8 roar snaps you back to reality. There’s a lot of firepower lurking under that hood. Ferrari appears to have thrown-in with the technocratic lot, and put touch-enabled surfaces, even on prime real estate like the steering wheel. Fortunately the manettino is still a proper analogue dial, but the markers are digital.

The Roma shares plenty with the new Portofino M, or rather the Portofino M does with the Roma. It’s got the same 8-speed dual-clutch gearbox – a technology that’s been serving as the ace up Ferrari’s sleeve for over a decade now. The louvered edges of the bonnet extend ahead before tapering off and subtly curving towards the headlamps.

It’s like looking at a sculpture as you drive, and it also gives you a sense that the Roma is much wider than the Portofino. It’s not preposterous like the F12 or the 812 Superfast, and exiting Dubai’s car-laden roadways felt pretty fuss-free. Not too long after that, Jebel Jais’s buttery-smooth tarmac beckoned me, and the Roma took to it like a gerbil to celery. 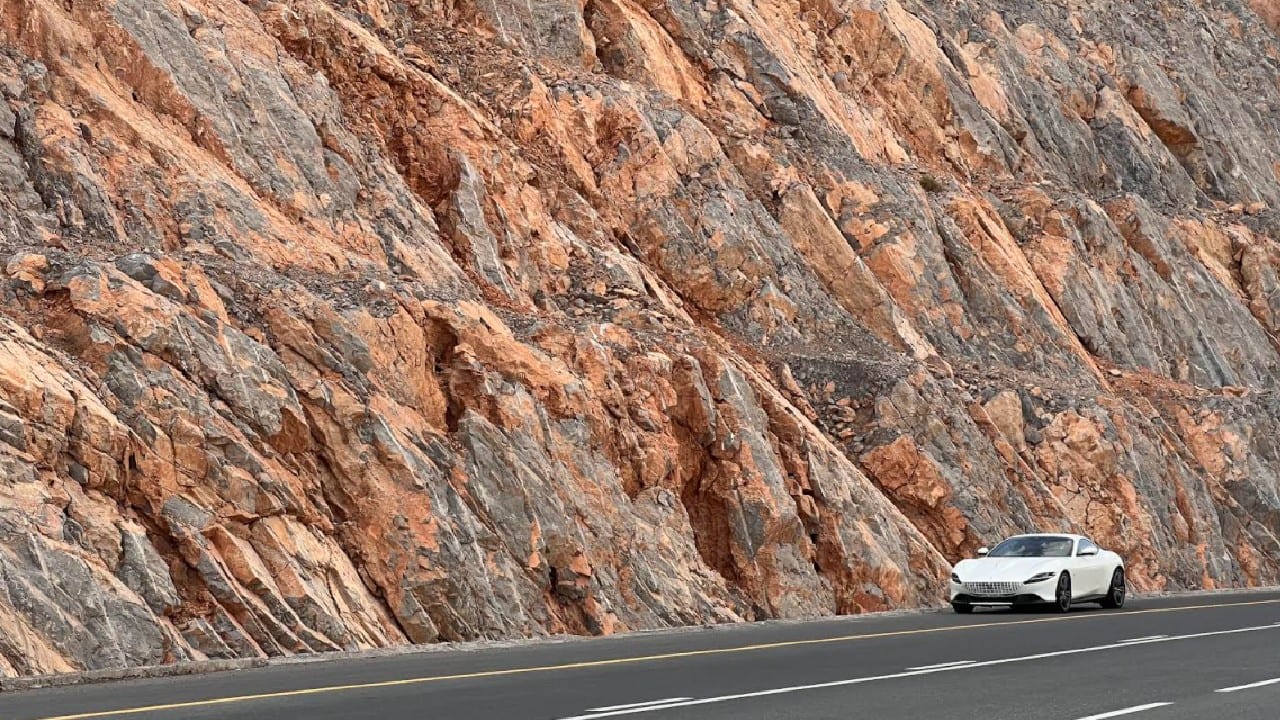 Turn the manettino to race, and the Roma’s hardtop structural rigidity immediately shines through. Despite its rather stately demeanor, the Roma feels more playful than the Portofino. It’s a lot more tail happy, even though the electronics know just when to step-in, it’s happy to slide-out ever so often, making it an absolute delight around corners. The steering is one of the most informative ones I’ve ever had the joy of experiencing. Constantly translating loads of information from the wheels and sending it your way. It also has the reflexes of a caffeinated fox, turning into a corner almost telepathically. It’s good enough to momentarily make you forget about just how great mid-engined Ferraris are, at this sort of thing.

The eight-speed DCT doesn’t miss a beat. It’s always ready to change-up, lying perennially in anticipation and kicking-in just when you need it. Speaking of kicking-in on time, if you thought the shortcomings of turbocharged performance were applicable here, you’d be wrong. Sure, the alacrity of naturally-aspirated combustion is missing here, but Ferrari’s nifty Variable Boost Management software ensures that throttle response is as instantaneous and explosive as ever.

It boggles the mind, just how the cleverest of engineering chops can get past some pretty complex issues. It also fills me with hope. With the ongoing assault on internal combustion, certain if the next iteration of their GT will pack a V8. Perhaps a V6 hybrid with a KERS system. 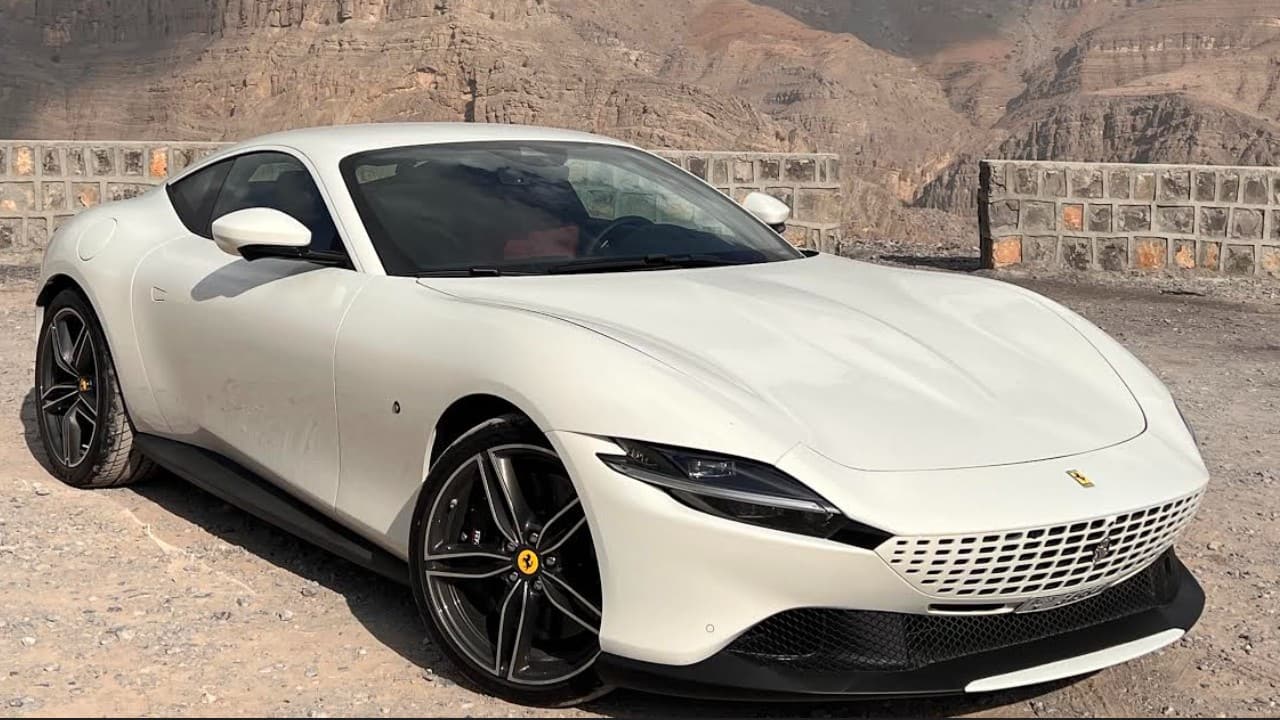 The Roma is a reminder of the price of progression, as we move into the electric age.

No one really knows. Displacement is likely to get smaller, but the sheer poetic manner in which the Roma shifts through cogs and gallops towards triple digits, I’m sure that Ferrari will find a way to breathe magic into whatever technology they’re required to adopt. Can an electric powertrain match the level of engagement offered by its dual-clutch gearbox? Can any two-speed electric gearbox match its level of intuitiveness? No electric performance car on sale can.

The Roma is a reminder of the price of progression, as we move into the electric age. The touchpad on the steering does get quite irritating. Everytime I tried to switch the manettino settings, vacillating between ‘Comfort’ and ‘Race’ I’d inevitably activate voice control, which
would then cover the SatNav screen occupying the gauge clusters. I’m not sure when brands would come to the realization that opposable thumbs work better with three-dimensional buttons, especially when you’re driving.

It is a car you can spend endless hours in.

The rest of the cabin is a fine balance between hand-stitched opulence, small, lever-like chrome buttons to engage drive, reverse and launch and a centrally-mounted touch-operated console. It’s inviting but not ostentatious and with the supercar elements edging-out the grand tourer aspect of the Roma with ease. That said, even after nearly a day in the driver’s seat, there wasn’t a trace of fatigue in my body. In ‘Comfort’ the Roma can potter about all manner of roads with a more supple ride quality.

It is a car you can spend endless hours in. Finding faults in the Roma can trigger a nosebleed or an aneurysm, so I’d rather not attempt it. Between its taught chassis, light gearbox and ridiculous good looks, there’s enough wholesomeness to make this your go-to car for all seasons.

Take it to the racetrack, take it to a mountain road, just point that finely-boned nose to the horizon – any horizon – and watch the magic unfold. The all-too important quest for the ideal grand tourer will always end with the Ferrari Roma.
Parth Charan is a Mumbai-based writer who’s written extensively on cars for over seven years.
Tags: #Auto #Car review #Ferrari #Ferrari Roma #India
first published: Dec 27, 2021 03:23 pm