Five things that make the Mercedes-Maybach the ultimate luxury statement

The first batch is already sold out!

Mercedes-Benz India just launched the Mercedes-Maybach GLS 600 – the ultimate car for the resident oligarch, of which there appear to be quite a few since over 50 units have already been booked. The next allotment is to arrive in the first quarter of 2022.

Why the rush? To begin with, this is one of the most opulent Mercs on sale in India, eclipsed only by the Mercedes-Maybach S-Class 650. Although it’s the second Maybach, it is the first Maybach SUV to make its way to India. Here’s why the opulent, Rs 2.43 crore SUV has such widespread appeal.

No, the Maybach GLS isn’t flight-capable. But as far as the middle-row is concerned, you may as well be wafting over clouds because it features Merc’s patented AIRMATIC air suspension with Adaptive Damping System Plus as standard. If that doesn’t feel supple enough for you, the E-Active Body Control suspension unit can be ordered as an option, which comes truly handy when off-road, and you’d have to be barking mad to take this thing over bogs and boulders. Barking mad or outrageously wealthy. Or both. It also minimises any motion felt by the passengers, practically disconnecting the road from the passengers entirely. The GLS Maybach gets the option of a 4 or 5 seater cabin, with the former featuring individual, lounge-like Nappa leather-upholstered seats at the back, with extending legrests. Dividing the seats is a centre-console with a mini refrigerator housed inside it – largely for champagne-cooling purposes. There are also two silver champagne flutes, because of course there are. 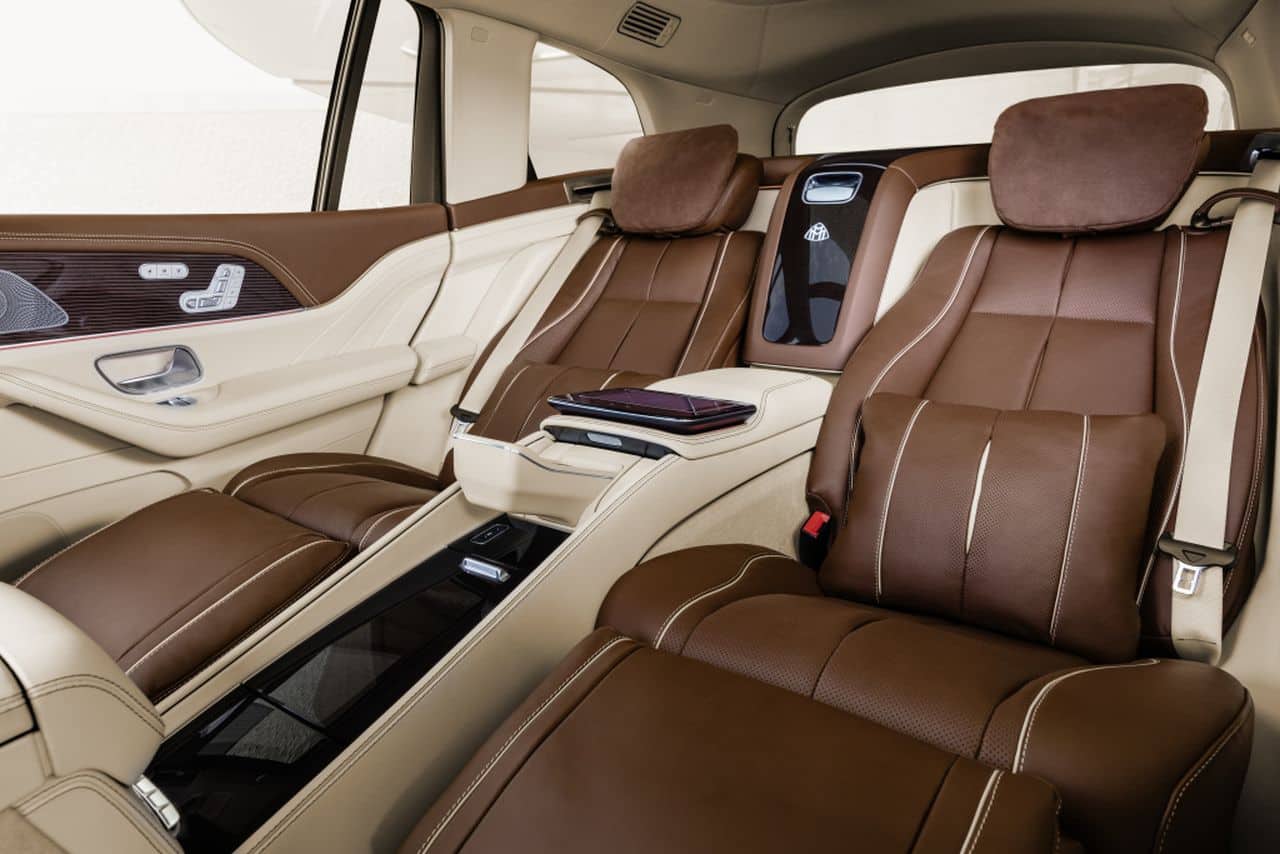 Keep in mind, the Maybach GLS is based on the standard Mercedes-Benz GLS – the largest SUV in Merc’s garage, and so it’s Goliathan proportions are employed entirely to serve the purpose of outrageous luxury. The rear passenger gets a sizeable 1,103 mm of legroom, with a reclining function (up to 45 degrees), to properly enjoy sliding/tilting panoramic sunroof and the varying shades of ambient lighting that surround the cabin.  This is undoubtedly the most luxurious SUV produced by Mercedes-Benz in India. Indeed, south of a Bentley Bentayga (which costs nearly twice as much) or a Rolls Royce Cullinan, this is the most luxurious SUV in the country.

The ‘600’ in its name should clue you in to the fact that this SUV isn’t powered by a wheezy four-pot motor. No sir, the Maybach GLS gets a 4.0-litre, V8 petrol motor putting out 558 PS and 730 Nm of torque. It’s also got a 48-volt onboard electrical system which gives it features such as “EQ Boost” – which provides 22 PS extra and adds to the torque by a not inconsiderable 250 Nm. Because 750 Nm is so woefully inadequate. Merc hasn’t revealed its kerb weight, but we’re assuming it’s a few kilos shy of three tonnes, something that will undoubtedly factor into its fuel economy. Not that its owners are concerned with such trifles, even if a litre of petrol currently costs over Rs 100. Despite weighing what it does, the Maybach GLS will hit 100 km/h from a standstill in a claimed five seconds. 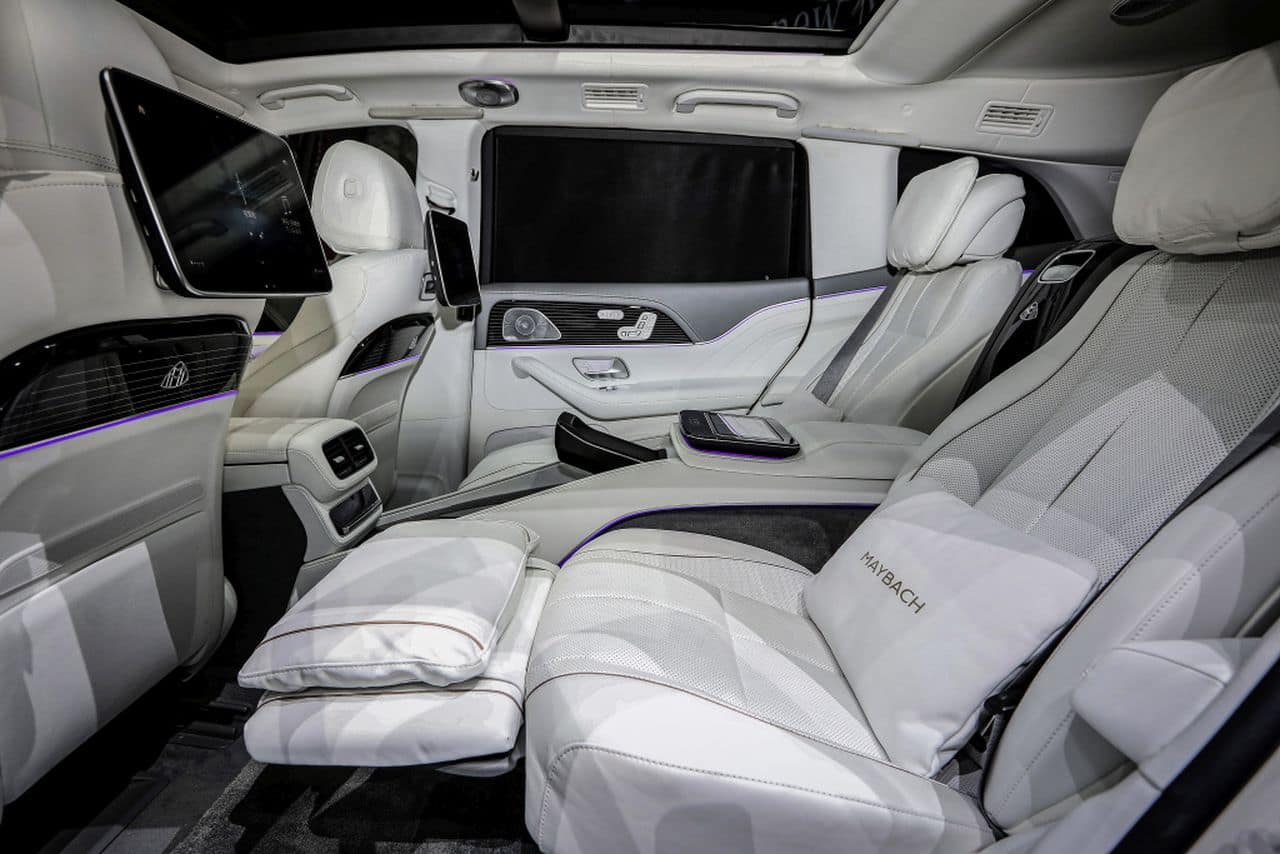 The Maybach GLS gives the rear passenger plenty to play with – a refrigerator for champagne bottles, stowage trays for notebooks or documents, two additional folding tables that transform the rear cabin into a perfectly functioning office suite. The multi-contoured seats also offer massage function (all seats), wireless charging and MBUX-equipped tablet stowed between the seats. This is in addition to the headrest mounted screens at the back.

Nappa leather runs across the whole cabin, including the dashboard and the midriff of the steering, which gets a 12.3-inch touchscreen display loaded with the latest MBUX interface. If that weren’t enough, it’s got eight unique fragrances installed in the cabin as well. And a 26-speaker Burmester audio system. The Mercedes-Maybach GLS 600 is capable of a sprint time from 0-100 km/h in five seconds.

It looks the business

Instead of Maybach’s famous “M-shaped” badge, the Maybach GLS wears the three-pointed star above its chrome-loaded, 28-slat radiator grille, which incidentally houses the “Maybach” motif between its louvres. Apart from the chrome-infested front fascia, it’s the 23-inch mult-spoke alloys that give the Maybach GLS a distinguished air. Heavy chrome usage continues at the back, and the overall dual-tone paint job really sets it apart from the crowd. Not that it needs much to stand-out.

If you’re pining after one, you’re fresh out of luck. But only momentarily. The next batch, which will be available next year will allow for heavy customisation.
Parth Charan is a Mumbai-based writer who’s written extensively on cars for over seven years.
Tags: #Auto #Mercedes Maybach #Mercedes-Benz #Mercedes-Maybach GLS 600 #Technology
first published: Jun 8, 2021 07:49 pm