Lug VIP and Safari for a profitable journey

VIP Industries and Safari have risen by 72 percent and 50 percent, respectively in the past one year. However, given the secular theme, gains on account of shift from unorganised to organised, these companies are ideal for investors with a longer term investment horizon.

Once considered a utility item, luggage products now are a lifestyle statement, thanks to increasing business and leisure travel, and rising disposable incomes. The Good and Services Tax could be a short-term dampener for the luggage industry, but should benefit organised players like VIP Industries and Safari in the long run.

How big is the opportunity?

The overall luggage market in India is roughly Rs 7,000-8000 crore, according to market estimates, with organised players controlling 40 percent.

Over the last decade, the industry has consistently grown in respectable low teens. We see the growth sustaining as there are enough factors favouring this trend.

The growth of travel infrastructure such as roads, airports and railway stations have contributed significantly to the development of the travel industry in India. Over the years, both domestic and international air travel have consistently grown in double-digits. 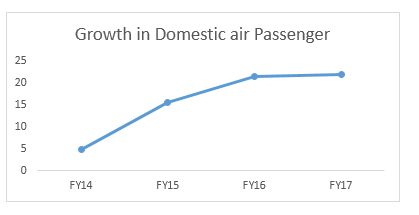 Macro drivers of the luggage industry

Aided by macro drivers like GDP growth, rising personal income levels, changing lifestyles, huge middle class as well as the availability of low-cost air fares and diverse travel packages, India is rapidly becoming one of the fastest growing outbound travel markets in the world, second only to China.  UNWTO (United Nations World Tourism Organization) predicts that today’s 20 million outbound Indian travellers will more than double to 50 million over the next three years.

India is expected to replace China as the most populous country in the next five years. Bigger than the entire US population, India’s middle-class today numbers 350 million people. Millennials, who constitute a considerable portion of Indian population, travel and like to do so hands free, which in turn has resulted in the growth for the backpack-duffle bag category.

Also, luggage has also become an important part of the wedding trousseau, with even people in Tier II and III cities buying branded suitcases and strollers during the wedding season.

While the rural segment was traditionally catered to by the unorganised sector, branded players in recent times have started launching products at reasonable price points to grab market share in this category as well.

Modern retailing and new fashion trends are also expected to drive the sale of casual bags and travel luggage bags category. As per a Nielsen’s West report, the proportion of consumers who claim to shop at Modern Trade ‘occasionally’ has grown from 54 percent in 2015 to 66 percent in 2016. Hypermarkets have become a favourite destination for the urban shoppers and as almost all the luggage brands are visible there.

Apart from hypermarkets, luggage retailers are also tapping online marketplaces including Flipkart, Amazon and are revamping their own online portal to catch eye balls.

Oligopolistic nature of the organised sector

Samsonite, VIP and Safari constitute approximately 95 percent of the total organised sector of the luggage industry. Brands like Delsey, Tommy Hilfiger to name a few, account for the rest. VIP is the leader with an almost 50 percent market share, followed closely by Samsonite (45 percent). Safari accounts for the rest.

The oligopolistic nature of the industry, favourable macro tailwinds, and gradual shift in consumer preference for branded luggage (also triggered by the implementation of Goods & Service Tax) augurs well for the organised listed entities like VIP Industries and Safari.

While GST prima facie looks like a dampener with a higher rate of 28 percent compared to the current revenue neutral rate of 18 percent to 19 percent, it may be countered to some extent in the short term, thanks to the strength of the domestic currency. Strengthening of rupee and softer polymer prices should have a sobering impact on input prices (largely imported from China).

We feel organised players can tide over the incremental taxes with smart management of costs. Unorganised players might be at a disadvantage as pricing difference--their competitive edge—would get considerably eroded should they be forced to adhere to the taxation norms.

Two companies worth a look

VIP is now the second largest player in the world and largest in Asia. The company derives ~45 percent of its sales from the VIP brand, 27 percent plus from Skybags brand, 20 percent from Aristocrat and Alfa combined, and ~8 percent combined from premium Carlton and Caprese brands.

Over the past few years, VIP has wrested share from Samsonite across segments, though it has lost share to Safari, primarily in the value segment. VIP gained large market share in backpacks and has become the market leader from a nil presence a few years ago.

A stable and a matured player with a diverse offering, VIP will balance growth and profitability going forward and be a secular play on this theme.

VIP – A Glance at Finances Safari (market Cap: Rs 550 crore) has become a serious challenger in the past few years especially in the value segment with its aggressive growth strategy. This company is rapidly spreading itself through mass-premium section and is planning to revamp the entire portfolio for more aggressive expansion. It has acquired Genius Leathercraft and with that the brands like Genius, Magnum, Activa, Orthofit, all came into the Safari basket. It has also forayed into school bags segment.

Soft luggage is a major contributor to sales. With the right product offering, the company is trying to cater to the change in consumer preferences towards the convenience of light and wheeled travel products and away from heavier products without wheels.

With growth as the mantra, the company appears to be grabbing market share at the cost of profitability. Being a price competitive player, after the initial hiccups post GST, Safari Industries should be able to wrest market share from unorganised players. In the near-term, the sharp appreciation of the Indian currency should shield margins to some extent.

The company has aggressive growth ambitions and targets to become Rs 1,000 crore company in next three-four years.

Safari – A Look at Financial Journey 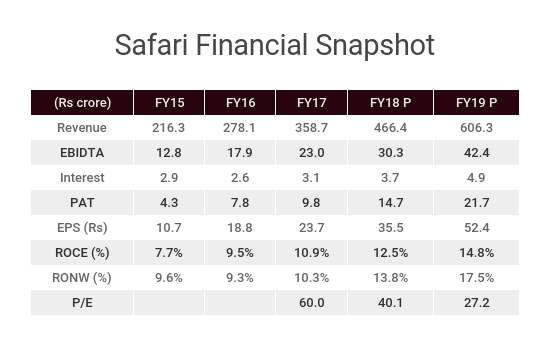 What should you buy?

VIP Industries and Safari have risen by 72 percent and 50 percent, respectively in the past one year. However, given the secular theme, gains on account of shift from unorganised to organised, these companies are ideal for investors with a longer term investment horizon. Investors should gradually accumulate the stocks with 60 percent weight in VIP and 40 percent in Safari to capture stability and growth of this highly promising segment.
Tags: #Business #Companies #GDP #growth #GST #Sector analysis #Stocks Views #VIP
first published: May 29, 2017 04:05 pm