you are here: HomeNewsIndia
November 25 will mark a year since farmers from Punjab, Haryana and Uttar Pradesh marched on the capital, demanding a repeal of three contentious farm laws. Braving the cold winter of Delhi, police batons and a deadly second wave of the coronavirus disease, the farmers have stayed put. What now? Against the backdrop of recent instances of violence, where are the protests headed?
Updated : October 23, 2021 / 04:13 PM IST

It started fairly innocuously, as a Delhi Chalo (Come to Delhi) call by farmers’ unions campaigning against three farm laws enacted by the central government. Amid a stalemate in efforts towards a settlement, the ensuing sit-in at the borders of the capital has turned into the longest protest against the Narendra government since 2014.

November 25 marks one year since farmers from Punjab, Haryana and Uttar Pradesh marched to the capital demanding a repeal of the three farm laws, which they feared would deprive them of bargaining power, leave them at the mercy of corporate powerhouses and could be a prelude to the scrapping of minimum support prices assured by the government for procuring their crops.

Braving the Delhi winter, police lathis and a deadly second wave of the coronavirus disease, the protestors have stayed put. They have pitched hundreds of tents and set up makeshift community kitchens and clinics along three key highways leading to Punjab, Haryana and Uttar Pradesh, sending out a clear message that they were prepared for the long haul.

Two recent incidents of violence related to the farmers’ protest have raised questions as to where the campaign is headed next. Moneycontrol explains those two incidents, what the future possibly holds and what the past year has meant for the protest, one of the longest ever waged by farmers in post-independent India. On October 3, eight people were killed in violence that took place in Uttar Pradesh’s Lakhimpur Kheri. Of the eight, four were protesting farmers, who were allegedly knocked down by vehicles driven by Bharatiya Janata Party (BJP) workers travelling to welcome Uttar Pradesh deputy chief minister Keshav Prasad Maurya to an event organised in the area.

Of the other four, two were BJP workers, a driver of Union minister of state for home Ajay Kumar Mishra and a local journalist.

News18 has gathered that the Lakhmpuri protest had its roots in Ajay Mishra’s remarks in Sampurannagar area of Lakhimpur Kheri on September 25 when he reportedly said “farmers should reform themselves or they will be reformed.”

His remarks were in response to black flags displayed by some farmers when he was en route to a function. Farmers had since been protesting against the minister, who said his statement was twisted by his critics. Farmers protesting against the death of four farmers in Lakhimpur Kheri, Uttar Pradesh on October 3.

Things came to a head on October 3 when Maurya was to arrive in Lakhimpur Kheri to launch a number of government projects in the presence of Ajay Mishra. In the morning, farmers occupied a helipad where Maurya was to land, forcing the deputy CM to drive to the district.

Maurya and Ajay Mishra inaugurated the projects in Lakhimpur Kheri around noon before deciding to head to the Union minister’s village, Banvirpur, to watch a wrestling competition. Before they could reach Banvipur, around 3pm, at a place called Tikunia enroute, the violence took place. There are conflicting versions of what happened.

Farmers claim that Ajay Mishra’s son Ashish Kumar was in a vehicle with armed men that deliberately ran over protestors in Tikunia when they were stopped. Farmers have lodged a complaint against the minister and his son.

The Union minister has described it as an “accident”. BJP workers were driving to receive the deputy CM when they were attacked with stones by farmers, one of the drivers was injured and lost control of the vehicle that ran over the farmers, he claimed. The driver and three BJP workers in the vehicle were then pulled out by farmers and lynched, he said. The minister said his son was not present in the area at the time.

After multiple summons by the police, Ashish Kumar presented himself to a special investigating team (SIT) formed to probe the case, and was subsequently arrested. Nine others have also been arrested in the case so far.

The matter is currently subjudice and in its last hearing on October 20, the Supreme Court observed that the UP government seemed to be going slow on the investigation.

“We think you are dragging your feet. Please dispel that impression," observed a bench of Chief Justice of India NV Ramana and justices Surya Kant and Hima Kohli.

The Bench had taken up the matter on October 7 after two lawyers sought the Supreme Court’s intervention in the case. After the UP government asked for more time, the next hearing has been scheduled for October 26.

The body of Lakhbir Singh, a Dalit farmer, was found on October 15 tied to a barricade at the Singhu border with Delhi; one of his hands had been severed and his body bore multiple wounds caused by sharp weapons. Hours after the crime, Sarabjit Sigh, wearing the blue robes of the Nihang order, claimed that he had "punished" Lakhbir Singh for "desecrating" a Sikh holy book.

Four people have been arrested in the case. Sarabjit Singh was the first to be arrested on October 15 for the killing of Lakhbir Singh. Hours later, Narain Singh was arrested by the Amritsar Rural police in Amarkot village of Amritsar district, the police said. He was brought to Sonipat by the Haryana Police on October 17.

Narain Singh, who spoke to journalists before his arrest, was unrepentant and said Lakhbir Singh had been "punished for sacrilege". Two more Nihangs, Govindpreet Singh and Bhagwant Singh of Fatehgarh Sahib, surrendered before Sonipat Police. 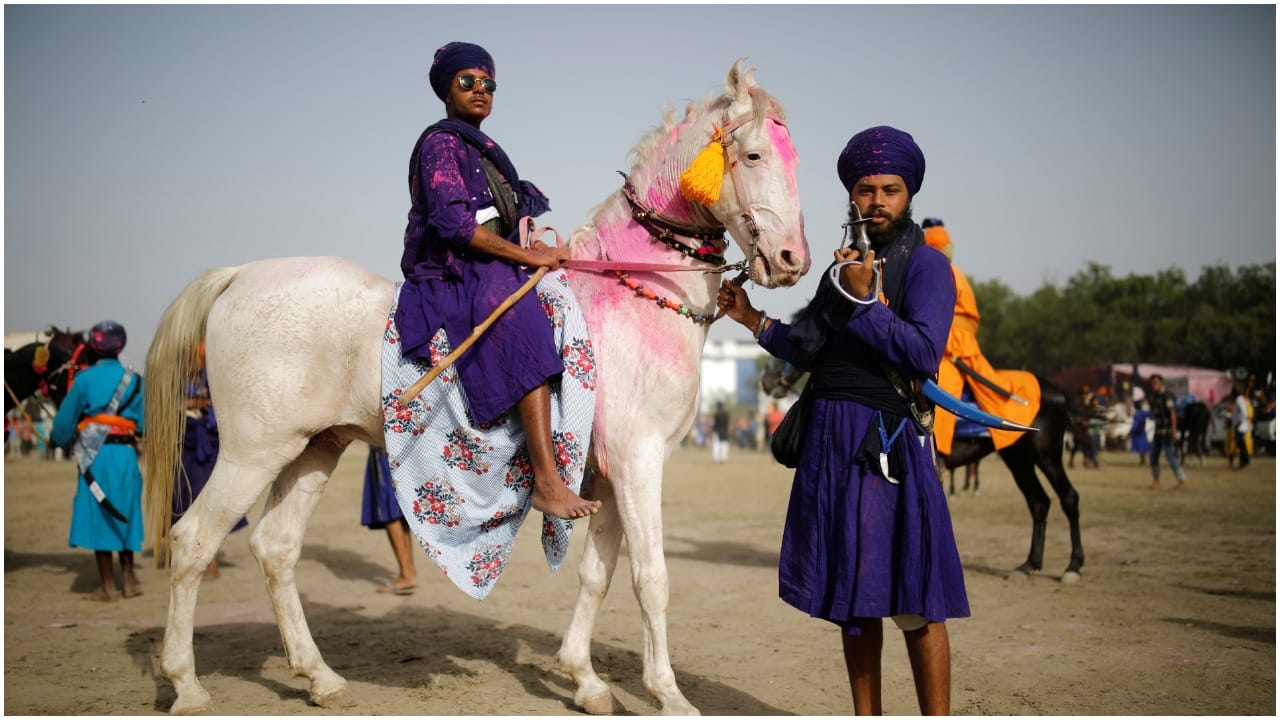 Nihang, or a Sikh warriors at the farmers protest site in Singhu in March 2021.

Three of the suspects were remanded to six days in police custody on October 17. Haryana Police has set up two SITs to probe the incident.

These incidents of violence have sparked outrage and triggered calls for action to clear the protest sites on Delhi's borders.

The purpose of the farmers’ protest against the farm laws is being questioned, given that the Supreme Court has already stayed their implementation. Farmers have said they would settle for nothing short of a repeal of the laws.

The Samyukt Kisan Morcha, an umbrella body of farmers’ unions, has distanced itself from the violence at the Singhu border and claimed that an attempt was underway to derail the protest.

So where is the protest headed now? Before we dive into that, let’s do a quick recap of how the protest evolved. 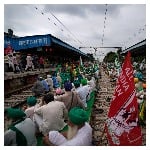 The root of the protest

In September 2020, Parliament passed the three bills the government said were aimed at freeing up trade in agriculture, allowing farmers to sell their produce wherever they wanted instead of restricting them to local government-controlled mandis.

A few days later, on September 27, the three pieces of legislation received the president’s signature and notified in the Gazette of India. After sporadic protests against the new farm laws, including a nationwide road blockade on November 3, farmers’ unions in Punjab and Haryana on November 25 called Delhi Chalo .

Delhi Police rejected the farmers’ request to be allowed to enter the city, citing Covid-19 protocols, but the farmers pressed on, braving water cannon and teargas. Farmers protesting in the cold winters of Delhi in November 2020.

A subsequent 11 rounds of talks between farmers’ representatives and the government failed to arrive at a solution. The government said it would amend the laws, and offered to put them on hold for one-and-a-half years, but the farmers wanted them repealed.

The Bharatiya Kisan Union moved the Supreme Court against the three farm laws on December 11. On January 12, the Supreme Court stayed the implementation of the three contentious farm laws and set up a four-member committee to make recommendations on the legislation after hearing all stakeholders.

On Republic Day, thousands of protestors clashed with the police during the tractor parade called by farmers’ unions. At Red Fort, a section of protesters climbed poles and walls and hoisted the Nishan Sahib flag, a Sikh religious symbol. One protester died in the chaos. 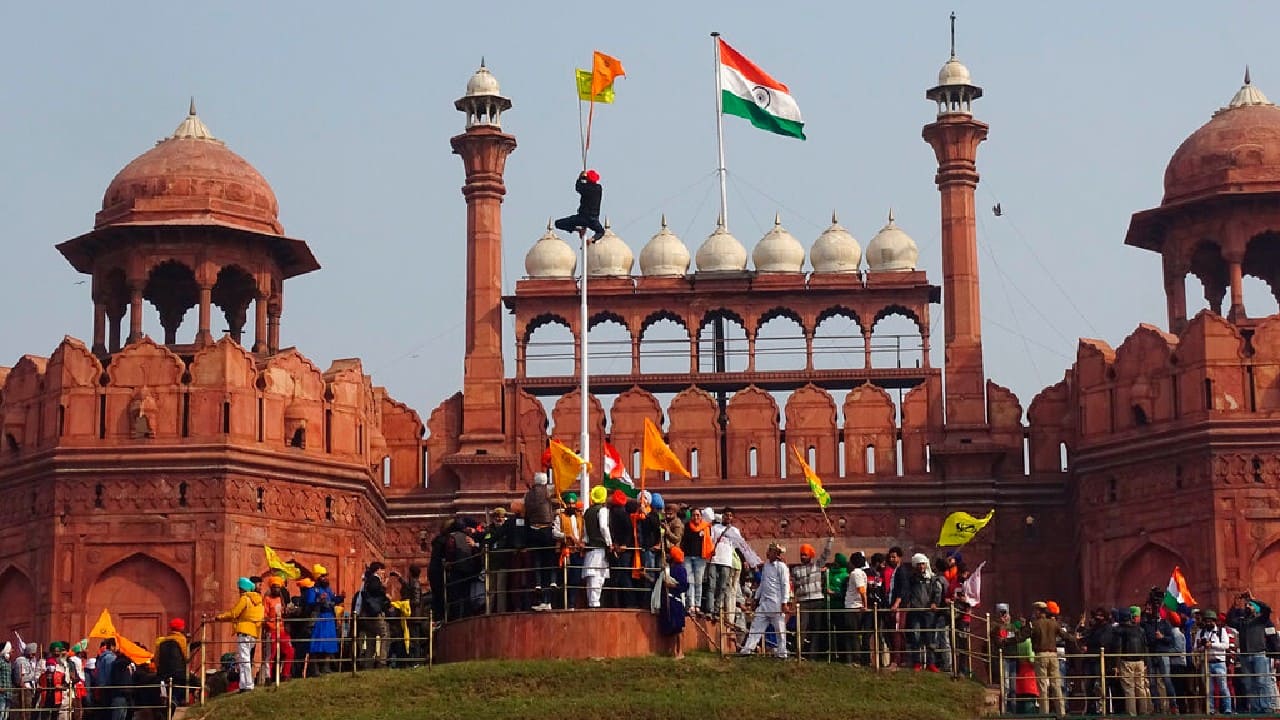 Tractor Rally & protests carried out by farmers on Republic Day 2020.

On February 6, farmers staged a nationwide chakka jam, or road blockade, for three hours from 12 noon to 3 pm. And on May 27, farmers observed a black day to mark six months of the agitation, burning effigies of the government. Although crowds at the three Delhi border points had thinned, farm leaders said their campaign would continue until 2024 if their demands were not met.

In August, reports of violence from the protest sites in Haryana’s Karnal grabbed the headlines. Haryana Police cracked down on farmers, leaving several injured in a lathicharge at the Bastara toll plaza on the national highway. The farmers were protesting against a BJP meeting on upcoming panchayat polls; it was being chaired by chief minister Manohar Lal Khattar.

A standoff between the administration of Haryana and the farmers ensued. It ended only when the state government agreed to a probe of the incident by a retired judge of the Punjab and Haryana High Court and said it would send Karnal sub-divisional magistrate Ayush Sinha on leave until the completion of the inquiry.

Barely a month later came the incidents in Lakhimpur Kheri and Singhu. Where are the protests headed?

On October 19, ahead of a crucial Supreme Court hearing, farmers called for more reinforcements to join them at the borders of Delhi. The Chalo Delhi call has once again been renewed to amplify the protests.

On October 21, the Supreme Court heard a case pertaining to the farmers right to protests and if they can take to the streets when the farm laws were already being contested in court.  The apex court observed that farmers have the right to protest and are not against this even when a legal challenge against the three farm laws is pending but they cannot block roads "indefinitely".

The farmers' unions alleged that the police were responsible for the blockade at the Delhi borders as it suits them to allow a feeling in the minds of the citizens that farmers are blocking the road while the Centre claimed there was an oblique purpose behind the protests.

The top court asked the farmer unions to respond within three weeks on the issue and posted the matter for further hearing on December 7.

The National Human Rights Commission (NHRC) last month issued notices to the Centre and the governments of Delhi, Rajasthan, Haryana and Uttar Pradesh, saying it had received complaints that the farmers’ protests had caused an adverse impact on industrial units and that Covid-19 safety norms had been breached at the agitation sites, according to a report in Hindustan Times.

In a statement, the NHRC cited allegations that at least 9,000 micro, medium and large companies had suffered the impact of the farmers’ protests. Protesting farmers have made it clear that their fight will go on until the laws are repealed. With no new date set for talks, the stalemate seems set to continue.