Dalit lives matter: This Bihar painter’s art is her activism

Madhubani artist Malvika Raj is using a traditional artform from her state, Bihar, to highlight the message of her icons, Dr Ambedkar and the Buddha.

Madhubani artist from Patna, Malvika Raj is known for her innovative twist to the traditional artform, which is usually centered around Hindu narratives from the Ramayana or Mahabharata. With the recent spotlight on the atrocities against the Dalit community, especially women, Malvika’s art is her own kind of activism, highlighting the philosophies of Dr BR Ambedkar and the Buddha through brushstrokes.

A graduate in fashion designing from NIFT Mohali, Malvika’s art has been displayed at several prominent exhibitions in reputed galleries such as the Jehangir Art Gallery in Mumbai as well as ICCR and Lalit Kala Akademi in New Delhi. One of her paintings, a Madhubani rendition of her icon Babasaheb Ambedkar, is displayed at the University of Edinburgh.

While Frida Kahlo and Vincent Van Gogh are her primary artistic influences, Impressionism and the Black Arts Movement have always inspired and guided Malvika. “Learning social literature and Dr Ambedkar’s philosophy from my father and travelling to Buddhist shrines and other places with my family truly inspired me back in those days,” she adds.

Dr Ambedkar has been depicted in many of Malvika’s works. Ever since childhood, Malvika’s father, a Bahujan Samaj Party politician, had narrated to her stories about the history and life struggles of Dr Ambedkar, Mahatma Jyotirao Phule, Savitribai Phule, Periyar EV Ramasamy, Sant Kabir Das, Sant Ravidas and the Buddha, making her acutely aware of social and political realities from a young age. “Dr Ambedkar has helped remove discrimination based on caste, untouchability and poverty that have existed in India for centuries, and restored human dignity by giving equal rights and justice to all. He wrote the Constitution of independent India, which granted equal rights to the most backward classes in the country, such as SCs, STs, OBCs and women,” says Malvika.

It was for all these reasons that she decided to depict his life through the medium of her paintings – her humble attempt to spread his message among the people of the country.

After completing her course at NIFT, she worked at various export houses in Delhi for three years before returning to her hometown, Patna. Here, she worked on some paintings that were embedded deep in her heart and mind ever since childhood. During this time, she also got a chance to understand Bihar’s Madhubani painting style.

She stayed for many days at the original site – the Madhubani district – where the art originates from, and studied paintings made by the women there. The paintings recreate small stories based on nature and culture, and depict various Hindu gods and goddesses. 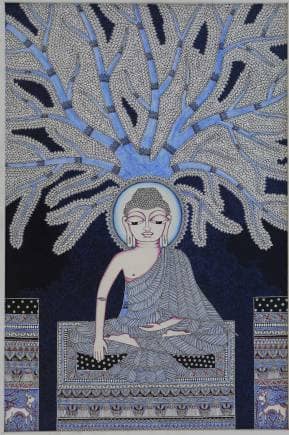 The experience wasn’t completely positive for Malvika as she learnt firsthand how deeply rooted caste discrimination was among the local populace, so much so that she was discouraged from learning the Madhubani style due to superstition about her Dalit roots.

“I made my own interpretation of the paintings, in a way that I could believe in them and connect with them personally,” she explains. Thereafter, she created her first series called The Journey in which she depicted the life story of Buddha, from childhood till the time he attained nirvana.

According to Hindu mythology, the Buddha is considered one of Lord Vishnu’s avatars. Malvika, however, considers Buddha to be a human form, who first attained enlightenment himself and then showed others the way.

“Buddhism is not religion, but ‘dhamma’, which leads people from darkness to light. I try to replicate its teachings in my own life. In my paintings, Buddha’s story is not based on the Jataka Tales; instead it is based on the reality of human life. I believe that Buddha is truth, and his story is also based on truth,” she says. 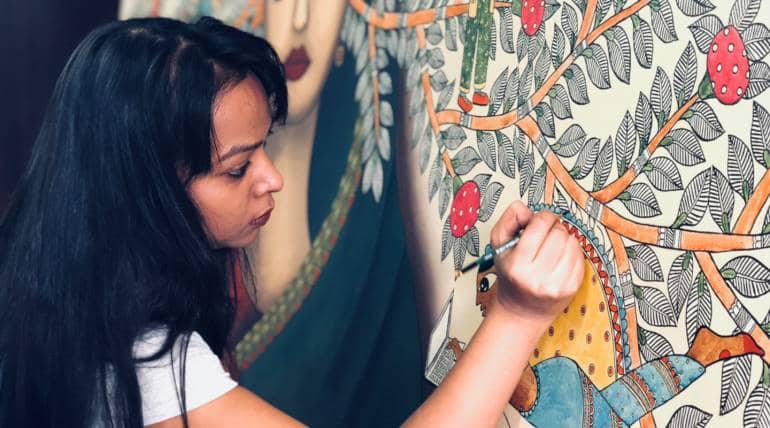 Malvika also has her own clothing line Musk Migi, a startup working with local artisans for a wide range of eco-friendly handcrafted and hand-painted garments, accessories and utility products. Its range is based on traditional Madhubani art and Godna (tattoo) – a marginalised, dying artform from Bihar.

All the pieces are hand-painted on handcrafted silk fabrics by rural women and artisans trained by Malvika. Her brand’s vision is to generate rural employment, create a niche market in traditional and Indo-western fashion, and preserve the aesthetic values of hand-made art and craft in this growing era of art digitalisation.