you are here: HomeNewsIndia China Border

The Ladakh standoff between India and China has ended for now, but it was no ordinary dispute between two states. The logistics, number of troops, clothing, terrain, food, high levels of acclimatization, fatalities in high altitude gave the battle a different dimension.

The nine-month-old Ladakh standoff came to an end in February and represented one of the tensest periods of military eyeball to eyeball gazing in arguably one of the most difficult terrains anywhere. When battles play out at heights of 14,000 feet upwards in temperatures that are touch -40 degree Celsius, it becomes a whole new ball game. The chances of perishing in extreme climate are, perhaps, higher than being felled by a sniper’s bullet.

Moneycontrol examines the critical elements and salient features of this high Himalayan exchange and looks at the most outstanding features of this impasse between two of Asia’s biggest economic powers. The battle is over, but if you are still wondering what kind of combat that unspooled in the Himalayan heights, here is a primer.

What is finger area in Ladakh?

The Finger area – from 1 to 8 - is located on the northern bank of the Pangong Lake in Ladakh.

The Indian Army and the Chinese People’s Liberation Army (PLA) have been engaged in a tense standoff not just on the northern bank of the Pangong Tso, but also southern bank, both of which have witnessed great deal of military action in the last few months. The Pangong lake is divided into eight fingers. In military parlance, the mountainous spurs jutting out into the lake are referred to as fingers.

India’s claim line is until Finger 4, whereas China’s claim line is till Finger 8. The disengagement pact between the two sides mandates China to move troops to Finger 8 from Finger 4 in the Pangong area. The Chinese military built several bunkers and other structures in the areas between Finger 4 and 8 and had blocked all Indian patrols beyond Finger 4, triggering a strong reaction from the Indian Army.

Ladakh, where India shares borders with two of its most important neighbours, China and Pakistan, is dotted with snow-capped peaks and arid valleys and is literally, the land of passes.

It is the highest plateau in India, located 3,000 metres or 9,800 feet above sea level. It is a cold desert with temperatures ranging anywhere between -20 degree Celsius and -40-degree Celsius in the winters. The terrain is extremely inhospitable with the average height of ridges that scarcely come down below 14,000 feet.

What does being posted at such heights and in such terrain entail for members of the Indian Army ?

Winter-related cold injuries like hypothermia, chilblains, frostbites, cerebrovascular accidents, cortical venous thrombosis, heart attacks and pulmonary hypertension are so serious that many patients must be airlifted to Chandigarh. A large part of logistical requirements on the Indian side is in the form of fuel, oil, and lubricants (FOLs). Oil is used for firing bukharis and cooking food as well as melting snow for drinking water and for barracks with heating systems. Arctic tents and winter clothing have been stocked. Nutritional requirements are met through provisions including 22 types of rice, pulses, and wheat, 65 necessary food items, perishables such as vegetables and high-calorie foods for deployment of 18,000 feet (5,500m) and above.

ORGANIC EFFECTS OF HIGH ALTITUDE
High-altitude cerebral oedema (HACE)
Swelling of the brain occurs because of high altitude. In the absence of early diagnosis (within 24 hourse), it can be fatal ORGANIC EFFECTS OF HIGH ALTITUDE
High-altitude pulmonary edema (HAPE)
In normal lungs, air sacs take in oxygen and release carbon dioxide. In high-altitude pulmonary oedema, vessels in the lungs constrict, increasing pressure. This causes fluids to leak from blood vessels to lung tissues and then into the air sacs. ORGANIC EFFECTS OF HIGH ALTITUDE
Renal function and fluid balance
A reduction in plasma volume occurs by 5 per cent, body water is also reduced by 5 per cent, mainly due to lower water intake, changes in thirst regulation, anti diuresis, fluid retention and disorders in urine production How many Indian soldiers were stationed in Ladakh to during the standoff ?

There were an estimated 90,000 Indian troops stationed at various points along the 3,800-km-long Line of Actual Control (LAC) that separates India and China. In addition, the Indian Air Force (IAF) had deployed additional fighter jets and attack helicopters in key bases looking after the airspace along the LAC in the Arunachal Pradesh sector.

How many Chinese troops were involved ?

About 60,000 Chinese Peoples’ Liberation Army (PLA) – or roughly four divisions - were deployed on the LAC. These included another division of 10,000 troops, which has been stationed in the Northern Xinjiang province, almost a 1,000 km from the front, but could be mobilised to reach Indian frontiers in 48 hours, due to the flat terrain on the Chinese side. At the crucial Spanggur Gap for instance, China had mobilised soldiers, tanks, and howitzers within rifle range of the Indian Army deployment in the southern part of Pangong Tso in eastern Ladakh. China also resorted to heavy deployment of radars, surface-to-air and surface-to-surface missiles as well as other air assets to support its army. At least 10,000 PLA soldiers were also believed to be camping around Indian deployments in and around Pangong Tso, Galwan Valley and Demchok in Ladakh, and Nathu La in Sikkim. What were the Indian regiments involved ?

The Indian Army had three divisions, several squadrons of front line tanks, additional artillery pieces and mechanised infantry squads ready for the Chinese, if hostilities escalated. India deployed its Special Forces units in Ladakh for operational roles, if required. India has more than 12 Special Forces regiments who train on different terrains. The Special Forces units deployed in Jammu and Kashmir regularly practice war games in high-altitude areas in and around Leh. Another mountain warfare trained force, The Ladakh Scouts, is an infantry regiment of the Indian Army, nicknamed the `Snow Warriors’ or `Snow Tigers’. This regiment specialises in mountain warfare, and its primary role is to guard India’s borders in the high altitudes of Ladakh.

What is the secretive Special Frontier Force (SFF) ? 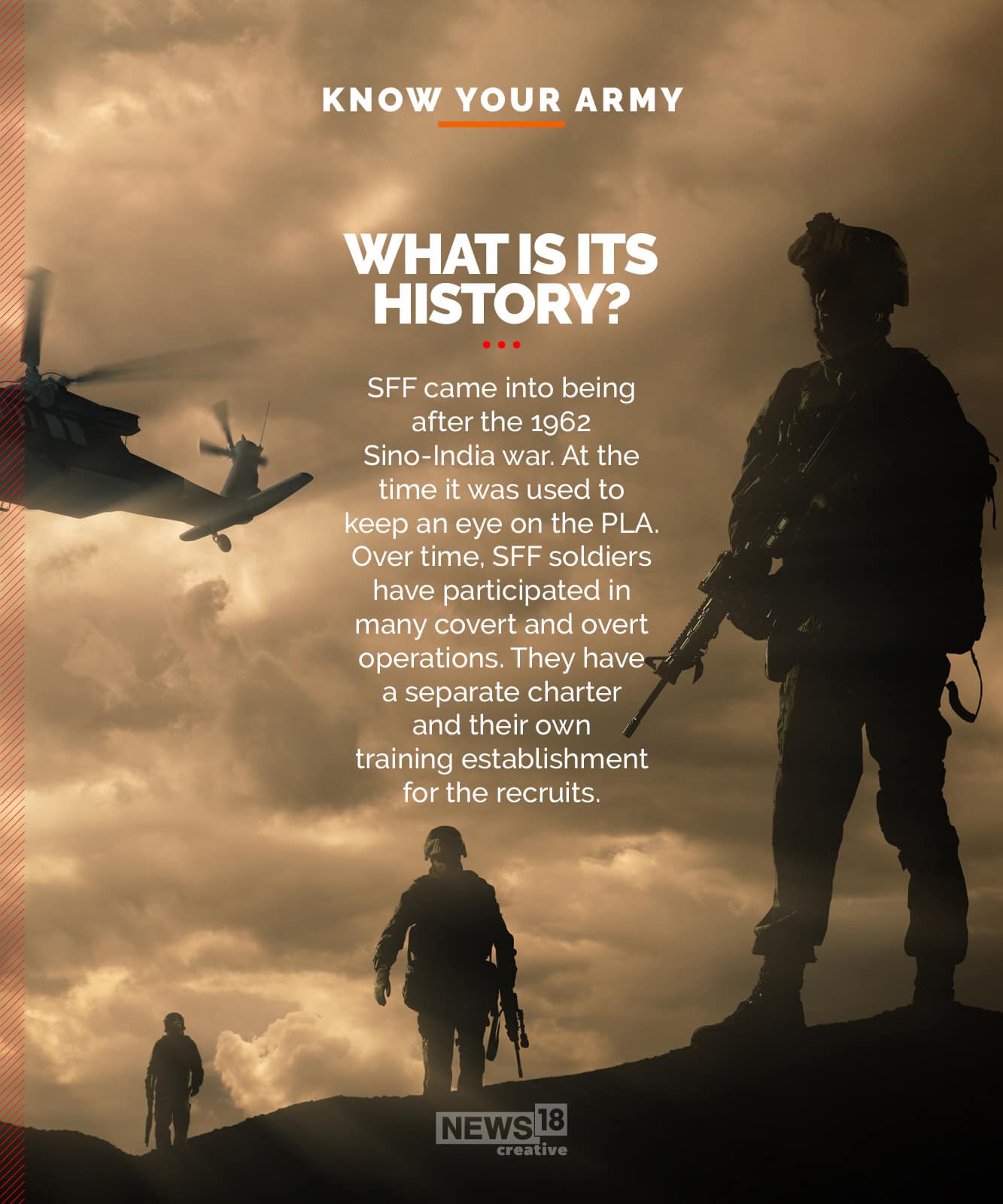 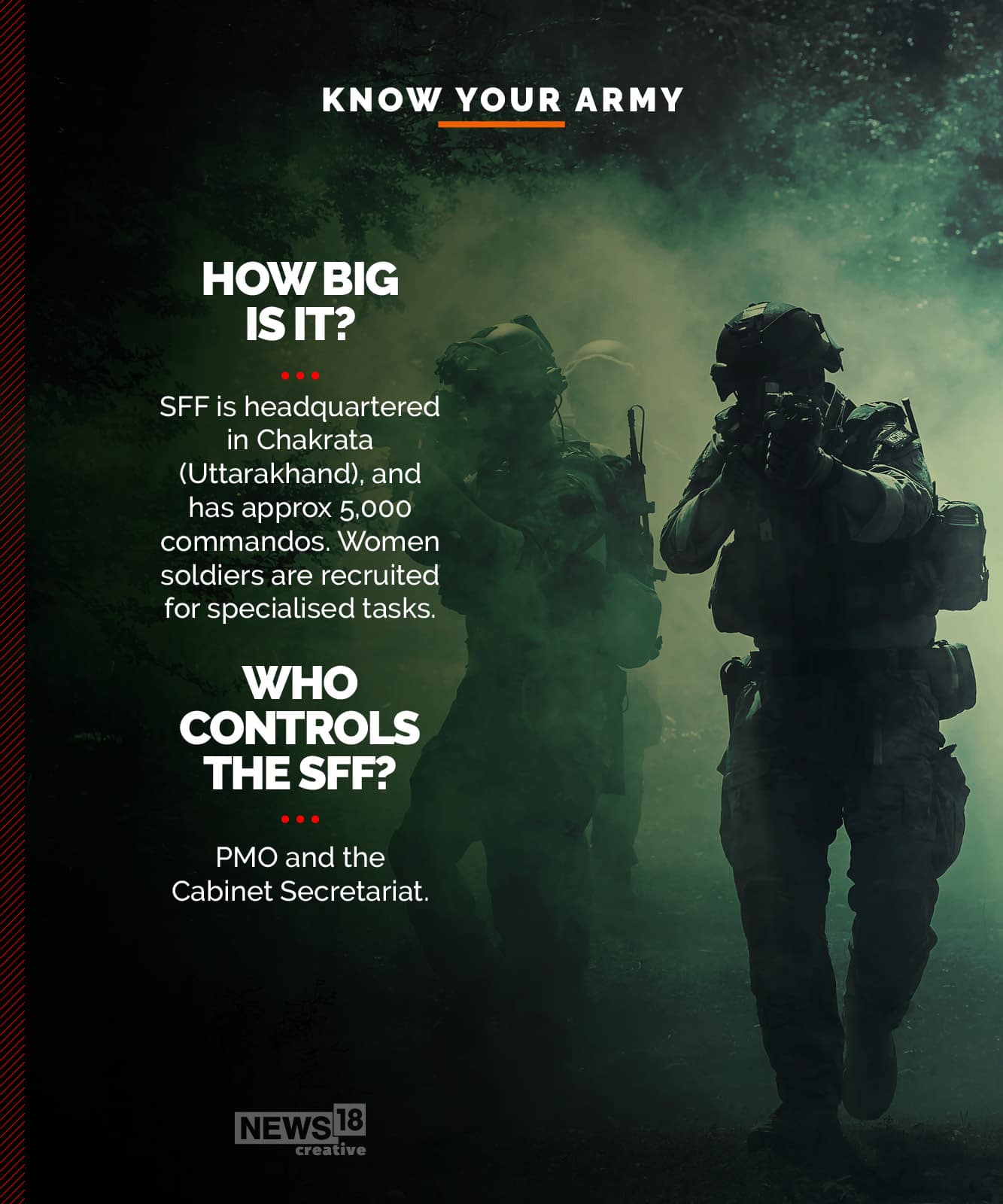 The focus on SFF, a behind-the-scene force, came to limelight after it was pushed into service to occupy the Black Top hill, near the south bank of Pangong Tso at the end of August. It was raised by the Intelligence Bureau in the immediate aftermath of the 1962 China-India war. The covert outfit recruited Tibetan exiles (now it has a mixture of Tibetans and Gorkhas) with its units that are now known as Vikas battalions. It is also believed that the CIA had a role to play in its formation. A Tom Grunfeld, history professor at the State University of New York, wrote in a paper in 2000 that the Indian government had created a `Tibetan military force called the Special Frontier Force with US support’ who were trained by US Special Forces (Green Berets) to operate from bases along the Kashmir frontier where they crossed into Tibet planting electronic listening devices. Who were the principle Chinese brain trusts involved in the Ladakh standoff?

This team included an Arabic speaking General with over 20 years of enforcing the Chinese Communist Party’s (CCP) diktat in Tibet, General Zhao Zonqi. There were four Lieutenant Generals and three divisions commanders, who oversaw PLA aggression on the LAC, bisecting Ladakh in India, and occupied Aksai Chin in China.

What were the main Chinese regiments involved?

The Chinese had brought in several companies of their BDR, a paramilitary organisation, into various locations along the Galwan valley, where India is constructing a bridge over a nullah or rivulet, near the confluence of the Shyok and Galwan rivers, about 200 km north of the Pangong lake. In addition, China had deployed its militia squads to ‘consolidate the border’ and ‘stabilise Tibet region’. The militia is an irregular mix of mountaineers, boxers, members of local fight clubs and others. Most of the members are raised from the local population. What kind of clothing is needed for this high, inhospitable terrain?

The Indian Army kit should be considered mandatory in this extreme cold. It was equipped with procuring gloves, sleeping bags, special world class boots as well as layered jackets. Besides winter clothing and rations, there is the criticality of maintaining a supply chain. Though there are heated facilities with bunker beds for several thousand troops, more facilities are needed. The army also provided special arctic tents as the temperatures in the night dipped to -30 degree Celsius in the winters. The soldiers were given multiple pair of clothing, including shoes, which often get wet due to the snow.