Tamil Nadu Exit Poll Results 2021 Live Updates: This means, MK Stalin will wrest power from Palaniswami and his party will rule the state for the next five years after spending 10 long years in the Opposition.

The DMK-led alliance is projected to win 160 to 170 seats out of the 234 Assembly seats in Tamil Nadu.

The Republic-CNX exit poll has predicted the return of DMK+ after 10 years. As per early exit poll projections, incumbent AIADMK will get 58 to 68 seats, while AMMK+ will get four to six. 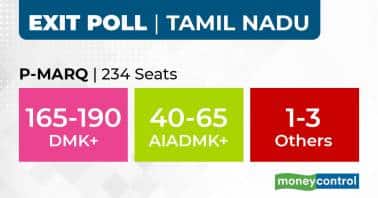 This means, MK Stalin will wrest power from Palaniswami and his party will rule the state for the next five years after spending 10 long years in the Opposition.

Here is what Poll of Polls Predicts in Tamil Nadu: While several parties are in the fray in Tamil Nadu, the main contest is between the ruling AIADMK and DMK. While AIADMK contested the 2021 Tamil Nadu Assembly election in alliance with the Bharatiya Janata Party (BJP), the DMK had tied up with the Congress.

This is the first time both DMK and AIADMK went to the polls without the backing of their stalwarts K Karunanidhi and J Jayalalitha.

The other two political alliances are the ones led by TTV Dhinakaran under AMMK and the one being headed by actor-turned-politician Kamal Haasan.

The exit polls for the Tamil Nadu Assembly election 2021 started trickling around 7 pm on April 29, shortly after polling in the eighth and final phase of the West Bengal Assembly elections concluded at 6.30 pm.

The single-phase election for the 234-seat Tamil Nadu Assembly was concluded on April 6 with a voter turnout of 71.79 percent, according to Election Commission data. There are 6.28 crore voters in Tamil Nadu and a total of 3,998 candidates in the fray. The results for the closely watched election will be declared on May 2.