Vice-chairman and managing director of ICL speak of cement, cricket, BCCI, and a raft of other topics.

Cement is a rough and tumble business, so is cricket administration, says N Srinivasan.

Be it running India Cements (ICL) or captaining the Board of Control for Cricket in India (BCCI), N Srinivasan has shown an enormous capacity to stay intense to play hardball. And his love for competition knows no bound. In this free-wheeling interaction with Moneycontrol, the vice-chairman and managing director of ICL speaks of cement, cricket, and a raft of other topics. Excerpts:

You have just celebrated 75 years. How has the journey been thus far?

You must first understand that only very few companies have survived 75 years, and are still up and running. Therefore, I am very proud as the head of this cement company.  It was born at the time of Independence.

In 1943, Sankaralinga Iyer and my father stumbled upon limestone. They were curious to find out what it was. And, they discovered it to be limestone. And, that was how the story of India Cements was born. They made a public issue in 1946 and started cement production in 1949. How did they do? How did they make it? I don’t know. I am proud that we have not fallen by the wayside. We now have limestone that can produce cement for another 100 years. The cement industry, however, has changed. There were very few players those days. Cement was under price and distribution control.

The entire cement industry was only 20 million tonnes up to the mid-70s. It had grown to 30-40 million tonnes in 1982. Full decontrol happened in the late 80s. Today, we are the second-largest cement manufacturers in the world after China.  The US comes next to us. Clearly, we have outstripped everybody else. We may be far behind China because of their infrastructure in terms of roads, multi-lane highways et al. It will happen in India as well. Today, Central India has been the focus with a lot of roads being built. Infrastructure consumes a lot of cement.

At this point, how does it feel to be in the cement industry?

I feel free because the Indian cement industry is free, and there is no restriction. But we do not have access to finance. Look at the capital market. Money is available and foreign investment is there. If you ask me, I will rather not be a listed company because the restrictions are quite huge.

The development finance institutions of former times such as IDBI and ICICI were no longer there. So, you can either go to commercial banks or tap the capital market. The capital market is not that easy, however. Commercial banks lend only for a very short period, and they charge higher interest. They are not development-oriented. Therefore, a lot of capacity expansion has to depend only on internal generation. The pace of growth will slow down, particularly since there are high tax rates. When I pay so much tax, how much money can I have for expansion?

I feel free because the Indian cement industry is free, and there is no restriction. But we do not have access to finance

Between former times and the present one, which one will you prefer?

I welcome decontrol. But there are today restrictions on how you can raise money and how you can expand. In spite of this, the number of companies have expanded. We ourselves have expanded. We can expand and add a million tonnes by balancing equipment at Malkapur in Telangana and Chilamkur in Andhra Pradesh. We have limestone at Damoh in Madhya Pradesh and plan to set up a plant.  But we are waiting for our resources to improve.

What is the cement scene like at the moment?

I look at India as five India – west, east, north, south and central. Most of the limestone is available in south India. If I look at scenario planning – looking at 5 to 10 years ahead – there has to be movement of cement from the south to the consuming hub. There is hardly any limestone there. Only 7 or 8 states have limestone capacity. In the early part of the cement industry, there was freight equalisation to get cement to Jammu and West Bengal.

Some change has to take place. You can’t have a situation where some states have excess cement production and others excess demand. The industry will see further changes. About 35 percent of limestone is in Andhra Pradesh, Telangana and Karnataka. In Tamil Nadu, most of the limestone is exploited. India will grow, and 400 million tonnes won’t be sufficient for it. It may need a billion tonnes. Where will it come from? It has to come from states which have limestone.

The government constitutes a development council for cement. It has now reconstituted the council. These are the issues the development council must address and recommend suitable policies.  At the moment, there is no short supply. But the problem is not felt today. I am talking of the future. Ultimately, there has to be some system for the movement of cement.

One can increase production in the south. I am looking at 10-15 years from now.  The South will be a cement hub. For the first time, some infrastructure is coming up south of Vindhyas. Once that happens, consumption in the south will also be substantial. Today, the Andhra Pradesh government is investing in housing and giving pattas to the poor. They will themselves consume substantial quantities of what they produce.

Do you think we need some sort of a regulated competition or co-operative competition?

As a private-sector man, I prefer – even though there is excess capacity in the south – today’s competition.  I can never accept control.  For, I have seen the bad part of it in former times.  Be it insurance or others, price under-cutting is happening everywhere. In Chennai, there are 40 brands of cement. The fact is that the consumer now has the choice of brands.

Why does a bulk commodity like cement need branding?

As a private sector man, I prefer – even though there is excess capacity in the south – today’s competition.  I can never accept control.  For, I have seen the bad part of it in former times

You talked about the cash-and-carry system. Is trade sale your focus now?

We sell through dealers. He buys from us and sells to others. That is called trade sale. We do non-trade sales as well. A contractor is typically a non-trader. He gets it at a lesser price. Then there is an institutional sale. They, too, get different rates.  We sell to the trade and non-trade categories.

We consciously implemented the cash-and-carry policy. During the pandemic, the capacity utilisation was low. Where will I go? I have to pay my employees and service the debt. The cash-and-carry system is virtually saving us. Even here, there is so much. Still, we are managing. There are price disruptions, no doubt.

Why is the competition intense in cement?

Do you think you will soon be a debt-free company?

I don’t know. Now that I have started repaying debt, my rating has improved. Ultimately, capital-intensive industries like cement will have to be financed by long-term money and cannot be funded by short-term money. That is the bottom line.  How did India become industrialised? IDBI and ICICI gave long-term money. Today, we have three-year money. I have expanded with it. Now, I will pause.

You have known to be a nicer boss to your employees. In difficult times, is it not a disadvantageous trait?

Seven wage settlements we have had since 1992 in the industry. I negotiated all these. During the pandemic, I did not ask anybody to go home. We paid full salary and bonus  as well. In a competitive world, it is difficult to continue like this. It is becoming more and more difficult to maintain this. Today, we have a lot of pressure on old smoke-stack industries. I follow all the environmental laws of India. Ultimately, everything has a cost.

During the pandemic, I did not ask anybody to go home. We paid full salary and bonus as well. In a competitive world, it is difficult to continue like this

Your love for a gentleman sport like cricket and your passion for rough and tumble cement... is there a dichotomy?

No doubt cement is a rough and tumble business. So is cricket administration. For a south Indian to survive and reach the pinnacle is a great feat. Our involvement with cricket dates back to my father’s day. In the 60s, nine of the 11 Ranji Trophy players were from The India Cements. Even now, we have many players. We run 11-12 teams.

That is why CSK (Chennai Super Kings) is not difficult to run. Everybody knows how to run cricket. One can own a franchisee. You should never think that you own the players. I was passionate. Chennai was one of the original test-playing centres. If somebody else had bid and if the price offered was lower, Chennai would not have got a team at all. That would have hurt the cricket-loving public of Chennai. So, I bid.

Has your BCCI (Board of Control for Cricket in India) stint taken your time away from The India Cements?

I don’t know. I can’t say nothing happened. I am a competitive fellow. The BCCI was competitive. But I delivered a great team for Chennai. India Cements, as a company, is known throughout the world now. You can’t say there are no spin-offs because of CSK.

Do you think that brand CSK has not been fully leveraged?

It is not leveraged because we did not want that. We wanted to play cricket. We wanted a team. During an analyst meeting, one of them asked me why did I not buy it myself if CSK was so great. I told him that CSK was so great and hence I felt that it should be shared with the shareholders. Leveraging will have happened on its own in time.

What do you portent for the industry?

I think capacity will improve. My sale in June was 6.8 lakh tonnes. It was 8 lakh tonnes in July.  Already, things are moving forward. I expect this year to be better than last year in terms of profit. I will maintain my competitive position. We want to be pan-India, and we will become one.

One hundred years from now, I will still be producing cement. I have enough limestone. So, the foundation has been laid for a long innings

How do you want The India Cements to be remembered?

One hundred years from now, I will still be producing cement. I have enough limestone. So, the foundation has been laid for long innings.

Going forward, what will be the fulcrum of the company?

One is improved cement performance, production et al. Another is a resurgent CSK. We have one priceless asset in CSK. There is always this succession question. That is settled. My daughter is there. She will carry on the flag. She is very passionate. She is like me. I am a good golfer. She is an outstanding golfer. I don’t hold her hands. She runs TNCA (Tamil Nadu Cricket Association) ably with the support of everybody. 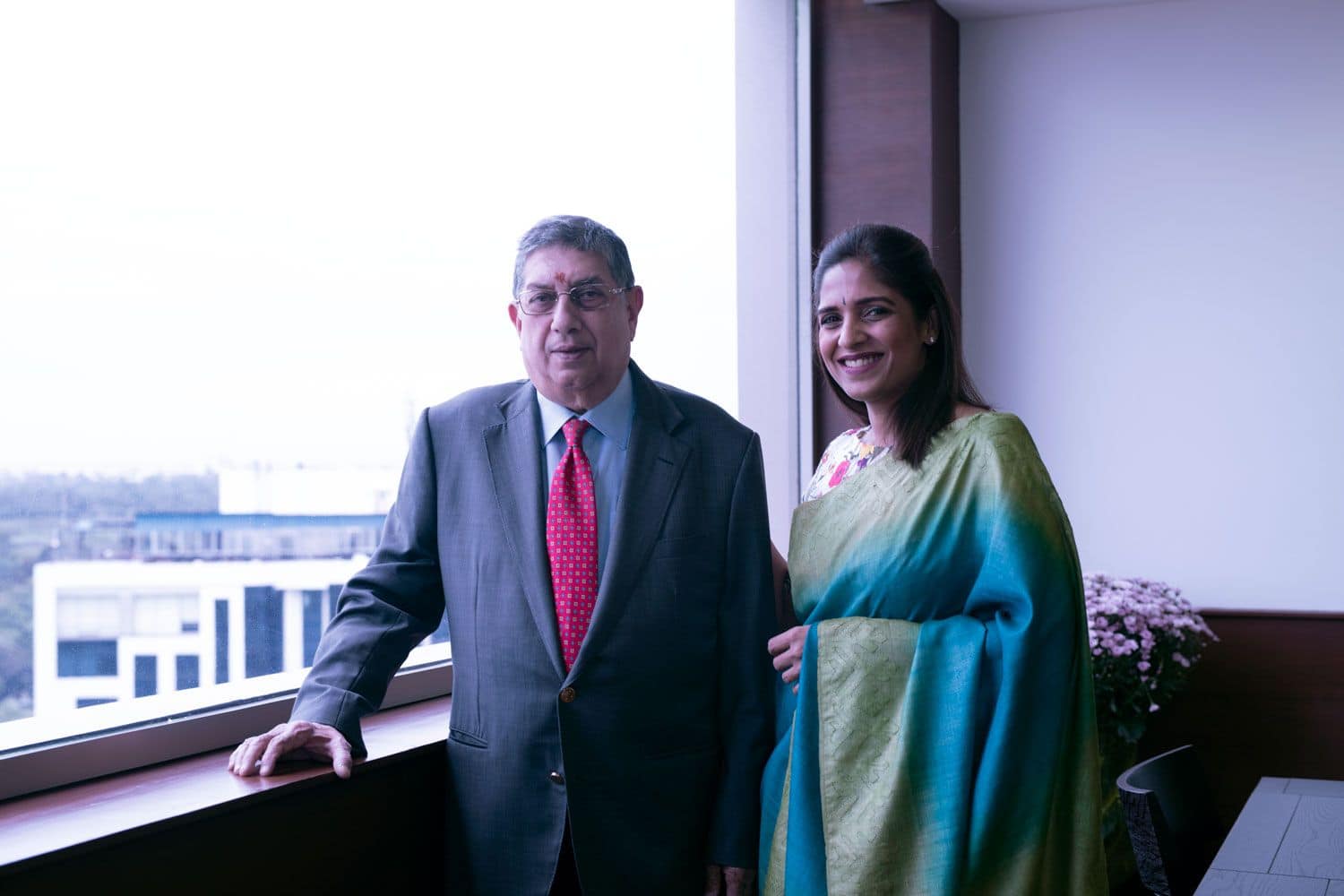 Will CSK outgrow The India Cements?

If you look at the history of franchise-based leagues in the US, it will outgrow everything. Passion for cricket is so much in India. The road between countries will see franchise-based leagues getting the precedence as we go along.
KT Jagannathan is a senior journalist based in Chennai
Tags: #India Cements #N Srinivasan Interview
first published: Jul 23, 2021 02:47 pm