The mammoth power of Dhoni’s attention

Dhoni’s story is that of empathy. The neighbour in the Mecon colony, the friend from school, the captain of his team, the winner for the country, Dhoni has made everyone feel noticed.

Note to readers: Soch to Success is a weekly column to enhance critical-thinking skills for you to achieve success. Each article is packed with insights, tools, and a roadmap to action.

Everyone around me has a story to tell about MS Dhoni. Some claimed to be true, some genuinely real stories. Mine is my father-in-law’s tale. Now retired, he used to work with Mecon Limited, the same place where Dhoni’s father was employed.

Mecon is not just a workplace but is a culture in Ranchi. A community has developed around Mecon and this community lives a closely-knit life in the residential colony and in and around the famous Mecon ground— Dhoni‘s first playfield.

There is a gentleman called Sunil, whose father, like Dhoni’s, was employed with Mecon and like other boys, Sunil grew up playing with Dhoni in the colony. As life’s needle moved, Sunil took up a job at Mecon Limited in his father’s place and became a narrator of this story.

In his early days of popularity and meteoric rise, Dhoni lived in the same colony. His intimidating success distanced the people around him. One day, Sunil was riding his bicycle to work; he crossed Dhoni driving his SUV. Shy Sunil thought Dhoni had not noticed him. As he rode past, Dhoni stopped, called out for Sunil, and met him as his old friend and offered his care.  Even today, years later, Sunil’s eyes well up narrating that moment.

There are several articles and videos about Dhoni as a cricketer and as a captain. But the most beautiful stories are not the grand stories of his strategies and his successes but are the small gestures that keep him human and yet make him god-like. Like the gesture in this story of a pause in his stride to touch a chord.

Seems natural and effortless? It requires an effort and a conscious mind to build an empathetic nature. We build businesses. We build brands. For our brands, we build communities and connections. What stands apart is how our relationships touch a chord and strengthen the brand and the business.

Your brand story is your story. And your account has three tenets of writing: are you empathetic; have you built a culture of empathy for your brand and do you make others feel heard?

Empathy is the ability to understand the feelings and actions of another person. It is about going out of own perspective and stepping into the other person’s view. Being empathetic holds one from being judgemental and it helps in touching a chord.

Empathy mapping is the core of the design-thinking process. Simply because understanding the consumer helps one find areas to create innovations. When one understands the need, especially the latent needs of the consumer, it helps in creating solutions that surprise and delight the consumer. Brand marketers get insights from being empathetic. Entrepreneurs launch their businesses as an answer to the question–what are the problems they are solving?

There are various ways of developing the skill. Here is a simple framework that I have referred to in the course SHIFT to build and nurture empathy skills. 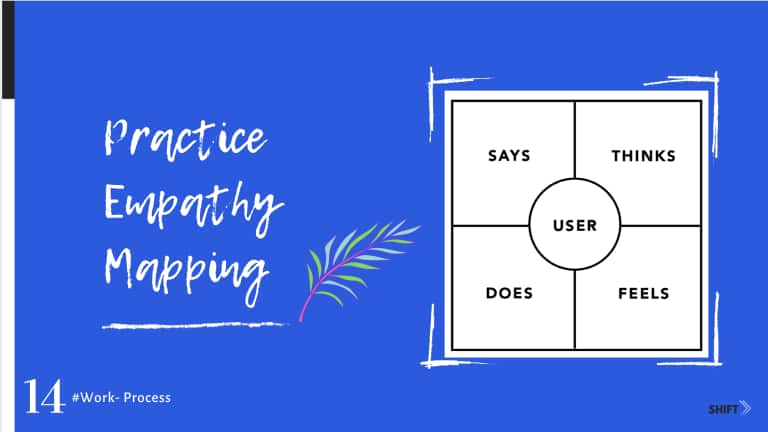 2 Not just the brand manager’s job

Working with empathy is not a one-time exercise. It is a journey. So, it is not just the brand leader’s responsibility. When the leaders equip teams with the tools to become better listeners, they nurture a culture of empathy. Behind every business’ systems and processes are human relationships. Lockdowns brought stillness to these workflows but businesses with an empathetic culture have been able to spring back faster in action as compared to others. Take a look at Amul cooperative, its narrative of business in this year is a story of empathy for its suppliers and customers.

To build to scale, one has to skill people for empathy across all departments.

As we target different customer groups for the same brand, we end up creating not just segments but communities. Communities are customers bound together by similar interests. So, a financial product has young professionals and retired professionals as two communities. The basic tenet of a community is the feeling of being with like-minded people, the feeling of not being alone. A community-led by a brand has to make people feel safe and cared for. Today, there is a need for a community manager to encourage two-way communications to make the members feel comfortable and heard. To touch the chord, on a scale, let the community members feel noticed.

Dhoni would have done something similar. He is not just empathetic, he has built a culture of empathy around him and he makes people feel noticed even if that is just a fan running to his crease during a match. I was in awe to see his Vijay Rath-his victory ride-after 2007 Twenty-20 World Cup. I had stood with my two-year-old son on the sides of Worli to watch him. The journey had taken hours to commute a short distance. People had rallied on foot, on their bikes, in their cars for hours. That was a moment of pride and faith for the country. That victory seeded hope of winning and the images still evoke that faith.

Dhoni is a story of empathy. He has a mammoth power of empathy, power of attention for people.The neighbour in the Mecon colony, the friend from school, the captain for his team, the winner for the country, Dhoni has made everyone feel noticed.
(Vishakha Singh, author of a forward-thinking course SHIFT, is a business strategist & a design thinking practitioner. She writes at www.habitsforthinking.in, offering insights into the ever-changing business environment.)
Vishakha SIngh
Tags: #MS Dhoni #Soch to Success
first published: Sep 26, 2020 07:42 am