With classes moving online during lockdown, many of India's kids lost access to education. These three EdTech startups are democratising the landscape.

With the 2020 pandemic changing the landscape of education, digital has been the buzzword for entrepreneurs. We feature three women-led EdTech startups who are riding India’s online education revolution and democratizing the landscape for people of all ages and socio-economic groups.

Akanksha Chaturvedi is the Mumbai-based founder CEO of Eduauraa, an EdTech venture in association with ZEE5 that aspires to provide quality education at an affordable cost. “Education is the central pillar of any country and the access to quality education should not be limited to a child’s socio-economic background,” says the graduate from University College London and postgraduate from Columbia University.

Eduauraa offers educational content for CBSE, ICSE and seven state boards in Hindi and English. Students from class six to 10 can access their complete course syllabus in four subjects (maths, physics, chemistry and biology) for packages ranging from Rs 999 to Rs 2,499 per year – a fraction of the cost of private schooling. Besides video lectures, the subscription includes value-added services like e-books and test papers. Premium subscribers get 1.25 lakh hours of entertainment across genres and languages. “This association will redefine education and entertainment with a reach of 75 million households countrywide,” said the brand’s press release while announcing Eduauraa’s launch by Bollywood star and brand ambassador Ranveer Singh on October 30.

During college, where she studied urban planning and business, Akanksha realised that access to quality education can change the face of the economy and aid the development of a country. She started working towards her goal of providing affordable, accessible and quality education of the highest standard, reinstating education as a right and not a privilege, and now heads a team of 210 professionals. Akanksha – who is a trained contemporary jazz dancer and is on the board of the prestigious YPO Next Generation – wanted to tap into the enormous potential of the OTT platform and to do for education what streaming channels have done for movies. “If digitisation can democratise entertainment then why not education?” she asks.

Anagha Rajadhyaksha is the founder of Playydate, a platform for kids’ activity and skills-based classes. Launched last year, Playydate already boasts of a pan-India network of more than 1,000 accomplished educators offering classes and workshops. At any given point of time, there are more than 500 classes and workshops available across more than 30 categories.

With a 15-year long stint in the digital space, Anagha is also the co-founder of the India Food Network and the PING Network. The Columbia University graduate says that the inspiration for Playydate began at home. Her mother has been a teacher for the past two decades, and Anagha observed her profession closely – how parents find her class, get in touch, register and communicate. Further, her brother and Playydate’s co-founder, Aditya, became a father a few years ago. Anagha saw him painstakingly looking for interesting learning experiences for his daughter even as a toddler.

In early 2019, she began to dig deeper and realised this scenario held true across the board. She found a very large but unorganised and fragmented market of educators – extremely talented and accomplished individuals who lacked a platform to get recognised and reach out to parents.

Anagha believes that the parent community is very focused and discerning, and recognises the importance that creativity, skills and hobbies play in the holistic development of their child’s personality. But she felt there was no common meeting ground that brought them together, no medium through which a parent could find the best educators for their child.

With Playydate, she brings a new dimension to the extra co-curricular activities (ECA) and programmes that can augment what schools already offer. Its differentiated offerings range from design thinking for young kids, science through storytelling, workshops on mindfulness, creative-writing classes that teach one how to write a blog to even public-speaking workshops that help a middle-schooler run a mock podcast.

They work with some of the most accomplished educators in these fields, and have already started offering customised workshops to schools as a part of their ECA programme.

Based in Mumbai, Anagha herself grew up in a close nuclear setup where extra-curricular activities were given as much importance as mainstream academics. “We were never pushed or forced into it, but always had a free hand to choose what we wanted to pursue,” she recalls. As a result, she plays multiple sports and various musical instruments. She says the combination of music and sport hugely shapes the person she is today.

The entrepreneur feels that interests, hobbies and passions build character and shape how a young child transforms into an adult. She believes that for kids to thrive in the coming decades, they will need to be armed with skillsets that go above and beyond the marksheet, and that the situations and challenges they face won’t be out of a textbook.

“Learning how to find solutions for a problem, thinking on one’s feet and creative out-of-the-box ideas will be some of the must-haves for future generations. Holistic development doesn’t mean you have all the answers; it means you have developed a mindset and skillset to address the questions and find the right answers,” she says.

According to Anagha, while digital education has been a great enabler in these difficult times with scores of children having access to great learning experiences, it comes with its own set of challenges.

She says that using digital technology to conduct classes is a completely new concept for most educators and has taken some time getting used to. Also, a lot of young learners are below the age of five, and certain courses require “handholding” quite literally. Anagha feels the way forward is for courses that contribute towards holistic development to become mainstream in our education system. “They need to be integrated into the curriculum and not looked upon as ‘extra classes’ that parents need to sign their children up for. As adults, we realise that it is our life skills, creativity or ability to think out of the box that help us thrive both professionally and personally. So why not integrate this into the school curriculum?” she reasons.

Delhi-based Aashi Sharma is the co-founder of Edubull, an e-learning platform and app. Incepted two years ago, Edubull aims to provide “content for every learner and teaching technology for every tutor and educational institution”. The EdTech startup is part of VISIONet, which provides learning solutions to over 10 state governments and 400 government institutions, and K-12 content to Rajasthan and Maharashtra state schools. VISIONet is also aligned with over 1,400 private colleges and institutions.

The new venture Edubull offers over 3,000 courses, 10,000 exams, and 50 certifications. Its content is curated by academicians from IITs and IIMs, and teachers from prestigious schools and colleges. Available on all devices, Edubull saw a 300 percent growth during the Covid lockdown and expects the number of users to touch 3 lakh by the end of the year.

Aashi, 22, had been part of Edubull’s development since day one, though she took over the reins full-time after completing her Bachelor’s in multimedia and mass communication from Delhi University. Daughter of GD Sharma, managing director of VISIONet, she was always keen to launch her own EdTech enterprise that would democratise the learning landscape and offer something for everyone, from schoolkids aiming for competitive exams to homemakers looking to upgrade their skills.

A passionate swimmer, Aashi has keen interest in political debating as well as trend forecasting. Having worked with the Kailash Satyarthi Children’s Foundation, she was acutely aware of the need of quality education being accessible to all. Many tutorials on Edubull are available for free, while the curated courses and branded content are available at Rs 999 per year. 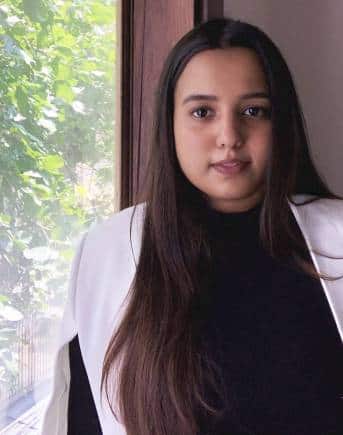