For the first time ever, the two companies have gone back to drawing boards to revise their announced dates fearing early competition from the rival.

CAIT claims that foreign e-commerce companies will adversely affect the country's economy, retail market, e-commerce business, agriculture, and other areas due to which the consolidation of the "nationalist forces had become very important."

This year's online festive season sale, which customers and online marketplaces wait for with bated breath throughout the year, seems to be messed up even before it could begin.

The sale, which is seen as one of the biggest annual events for Amazon and Flipkart, is witnessing the two companies locking horns weeks ahead of the actual event. For the first time ever, the two companies have gone back to drawing boards to revise their announced dates fearing early competition from the rival.

So much so that they have decided to start the sale during Shradh, unlike the previous years when they waited for this period to get over for the festivities to begin.

Like every year, this year also Flipkart was the first to announce the dates for its Big Billion Days. On September 21, it said its week-long flagship sale would begin from October 8.

Three days later, Amazon announced that it will begin its flagship sale The Great Indian Festival from October 4.

This announcement got Flipkart into a frenzy, which a day later advanced the Big Billion Days to October 3, a day before Amazon's sale was scheduled to begin.

If you thought that was the end of it, wait!

Is it mere optics? Experts would like to disagree.

Covid has changed a lot of things in the world, including the way people live and shop.

"It's not the optics of who started it first as much as what day one of a sale does bring in as harvested revenue. There is a very large overlap of common audiences using both these platforms together. He who reaps latent money first on day one does well," said Harish Bijoor, Brand Guru and Founder, Harish Bijoor Consults Inc.

Even though the economy is recovering post the second wave of Covid, customers are still cautious with their spending. This happens at a time when offline retail has also opened up, unlike the last year when people were mostly resorting to online purchases bruised and scared by the first wave of Covid.

This translates to limited money being available in the market for online festive purchases.

Calling this behaviour imitative exuberance, Dilip Cherian, image guru, said while 50 percent of these consumer purchases usually are planned, the rest 50 percent has always been impulse buying and the game will go in favour of the company offering better pricing.

Interestingly, the companies have also taken a big plunge in a market which is driven by religious sentiments by launching the sale during the Shradh period this year.

Customers wait for the auspicious festive season to begin to make big-ticket purchases such as mobile phones, television and consumer appliances. These are also some of the key categories which drive the gross merchandise value (GMV) for the companies during the sale.

This year grocery, loosely called the everyday essentials category, is also expected to contribute to the GMV during the sale.

"It is a big move. The companies must have monitored the sales that have been happening during the regular days. It is likely that they saw more traction than the last year.  This gave them the confidence that most of the consumers are still purchasing new products and this is not a significant thing. They seem to be confident this time that they will be able to pull it through," said Satish Meena, independent analyst. 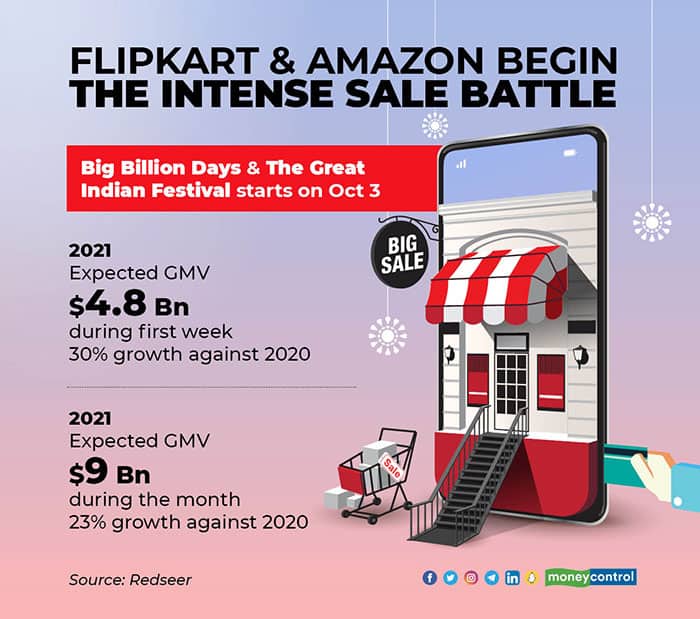 According to consulting firm Redseer, the first week of the online festive sales this year are likely to clock a GMV of $4.8 billion in 2021 reporting a growth of 30 percent as compared to 2020.

Further, these sales are expected to clock over $9 billion GMV during the entire month of festivities. This is a 23 percent increase from 2020, wherein the players clocked a GMV of $7.4 billion.

This year's sale also happens at a crucial time when the two e-commerce companies are facing investigations from multiple agencies including the Competition Commission of India (CCI) over alleged anti-competitive practices, predatory pricing and preferential treatment of sellers among others.

Currently, Amazon is also reported to have set up an internal investigation following a whistleblower complaint alleging that money paid for legal fees was funnelled into bribes by the company's legal representatives.

Amazon and Flipkart did not comment on specific queries around the change in dates and timing of the sale.