The aviation sector tumbled in April, in line with rising COVID-19 infections, and has shrunk further in May, with traffic at 15 percent of the pre-pandemic level. Airlines have taken a beating but market leader IndiGo maintained its dominance.

Travel and tourism collage with airplane against blue sky with clouds (Source: ShutterStock)

India’s civil aviation sector is neck-deep in trouble all over again, having hit an air pocket just when it seemed poised for take-off after a tumultuous year.

Things had started looking up and pre-pandemic levels of business seemed to be on the horizon, but just when the government said it would consider allowing airlines to operate full capacity if the passenger count exceed 3.5 lakh a day thrice in a month, the number started falling.

In March, the passenger count never crossed 3 lakh, and in April the number started contracting further, in step with rising COVID-10 cases as the second wave of the pandemic swept across the country, particularly in major air traffic hubs such as Mumbai, Delhi and Bengaluru.

Passenger count fell from 2.75 lakh in early April to just over 1 lakh at the end of the moth. Data analysis by international consulting firm ICF shows that the active COVID-19 cases in India went up 394 percent while traffic halved. Airlines were further hit because the flights weren’t pulled out in the same proportion. Daily flight count fell only 35 percent even while traffic was shrinking much faster, putting further strain on the finances of the airlines. Who shrunk the most and who held up

IPO bound GoAir and Tata-AirAsia Bhd owned AirAsia India were the fastest to respond to the changing market. GoAir’s departures fell 62 percent to 77 on April 30 from 201 at the beginning of the month. For AirAsia, the number fell to 55 from 161 over the month.

IndiGo, India’s largest carrier by fleet and domestic market share, shrank only 28 percent, operating 883 flights on Apr 30. The airline ended the month operating 31,516 departures, which was more than the entire competition put together, or 52 percent of total domestic departures in the country in April, data from ICF showed.

National carrier Air India shrank the least amongst major carriers, reducing its operations by only 11 percent, while subsidiary Alliance Air contracted by a quarter of its operations by the last day of April. Hyderabad-based Trujet also shrank by 11 percent. Both Trujet and Alliance Air have a large presence in RCS-UDAN and the viability gap funding would help cushion the impact.

For Spicejet and Vistara shrunk, the decline was 47 percent and 46 percent respectively between the first and the last days of April.

Where was the impact felt?

While Mumbai-Delhi remained the top route by flights for April with 1656 departures, it also was the most impacted with daily flights down to just 34 at the end of April from 77 on the first day of the month. The other four routes in the top-five list were flights from Delhi to  Bengaluru, Srinagar, Kolkata and Patna. 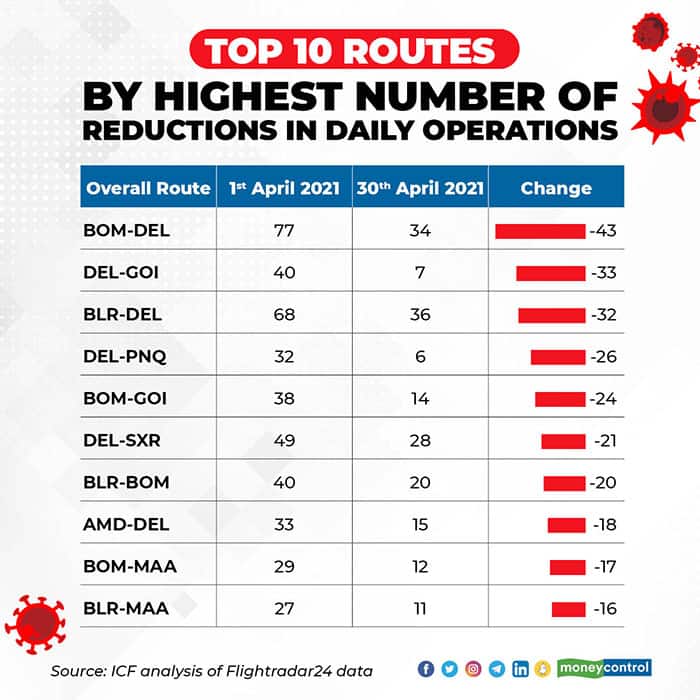 Leisure routes were the worst hit as as requirements for RT-PCR=negative results were back across states. Port Blair, Goa, Srinagar, destinations which had picked up in terms of leisure traffic, saw the highest drop.

Goa suffered a drop of 68 percent, with just 50 flights on April 30. There were 156 flights to Goa from across the country on April 01. Few sectors completely vanished off the airmap. Flights to Goa from Hubli, Jaipur, Lucknow, Nagpur, Kannur, Amritsar, Pune and Ahmedabad came to a halt while the largest impact was from Delhi which saw only seven flights instead of 40.

Port Blair, which always had a strict regime in place for inbound visitors, saw a 56 percent  decline in traffic. The airport lost direct flights from Mumbai and Delhi and the most popular route from Chennai - saw over half the flights being suspended.

If April was tough, May has been tougher. Passenger traffic dropped below the 1 lakh passengers per day mark for the first time since August 2020. The flight count also dropped below 1,000. This is less than 30 percent of pre-COVID-19 departures and less than 15 percent of pre-COVID19 traffic. The government had opened up air traffic in India with a capacity cap of 33 percent and a year down the line we are where we were a year ago!

According to Piyush Bansal, Operations Lead and ISTAT Certified Appraiser at ICF, “With domestic demand reduced to a quarter of pre-pandemic levels, it is hard for airlines to find routes that will allow them to meet the variable cost of operations. Continued reduction in fixed and semi-fixed costs, which is harder but equally feasible, is essential for long-term survival.

With IndiGo board having approved fundraising via QIP and GoAir having filed DRHP - two airlines have a plan of raising additional funds. While AirAsia India has scaled down its operations, Vistara is expanding! Time will tell how TATA’s support each of these airlines but that continues to raise a question mark over SpiceJet and its plans to survive and tide over this crisis.
Ameya Joshi runs the aviation analysis website Network Thoughts.
Tags: #aviation
first published: May 20, 2021 12:47 pm