Why have balanced advantage funds become so popular?

Not all BAFs behave in the same way. The sales pitch may be common, but their paths are different

There is a good reason why balanced advantage funds have become popular in the past year or two. In the month of December 2021, BAFs or dynamic asset allocation funds got inflows worth Rs 3,793 crore. This was the second-highest among all equity-oriented and hybrid funds. In the year 2021, BAFs’ assets under management (AUM) collectively grew most among all equity and hybrid funds; an addition of Rs 71,587 crore.

The pitch is simple: When equity markets rise, Balanced Advantage Funds (BAFs) will sell equity automatically and therefore limit your downside. But when equity markets are down, your BAF will buy equities and profit when the markets move up. It takes away the task of asset allocation from your hands.

Here’s the problem: Not all BAFs behave in the same way. The sales pitch may be common, but their paths are different. This impacts their performance. When equity markets fell between October and December 2021, HDFC Balanced Advantage Fund fell by 8.3 percent,

Invesco Dynamic Equity Fund and Edelweiss Balanced Advantage Fund fell by around 5 percent, each. Some others like ITI Balanced Advantage Fund and DSP Dynamic Asset Allocation Fund (DDAF) by less than 3 percent, each. Between October 2021 and January 2022, the average fall by three of best performing funds was around 1.5 percent. The bottom three fell by nearly 4 percent.

Clearly, all BAFs are not the same. How to pick one, then? A Moneycontrol analysis based on data by CRISIL Ltd shows that there are broadly four different types of BAFs out there, just going by their equity allocation throughout the year of 2021. Schemes like Kotak Balanced Advantage Fund and DDAF consistently held around 30 percent in equities. 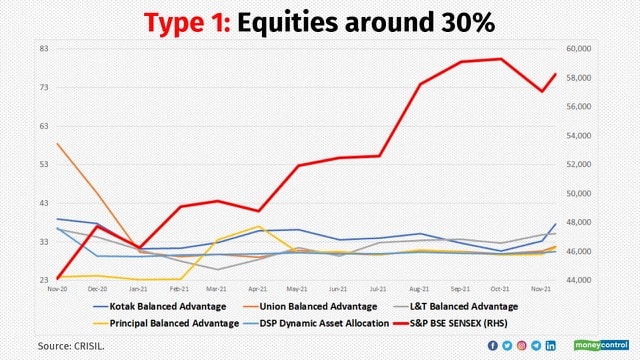 Broadly speaking, there are three strategies that BAFs follow. One strategy is a pro-cyclical. “It buys high and sells at an even higher level. It buys more equities at the start of the bull run and sell at the peak,” says Rushabh Desai, founder of Rupee With Rushabh Investment Services. Edelweiss BAF is a classic example. When equity markets go up, Edelweiss BAF’s allocation goes up too. Niranjan Awasthi, Head-Products, marketing and digital business at Edelweiss mutual funds says that contrary to popular belief, these BAFs also deliver in the long run of protecting the downside in falling markets and capturing the upside in rising markets. “But due to its unique model, Edelweiss BAF might fall more than the markets in the initial 5-10 percent correction. Then, it makes up and captures the trend,” he says.

The second strategy, the most popular of them all, is counter-cyclical. This fund sell equities when markets are a peak and buy as the markets starts to fall. “They are lesser volatile than most other BAFs and are meant for medium risk-takers, says Desai. ICICI Prudential BAF, with assets of nearly Rs 38,000 crore and the second largest in its category is a classic example.

Does BAF fit your portfolio?

Since BAFs aim to control your downside and reward you on the upside, a BAF should ideally fall lesser than SENSEX in falling markets. It should also ideally outperform debt funds since BAFs are hybrid funds; they invest in equities and debt instruments.

Between October 2021 and January 2022 BAFs fell by less than 3 percent. The S&P BSE Sensex fell by little over 7 percent.

A Moneycontrol analysis of BAFs over a series of 5-year and 3-year time periods shows that BAFs delivered over the long run. We took rolling returns, instead of point-to-point returns, to judge their consistency. Over a series of both, 5-year and 3-year time periods stretching all the way back to the year of 2015, BAFs gave nearly 8 percent return, on an average. Its maximum 5-year return has gone up to 11.12 percent, but on the downside, no BAF has lost your money, so far. In simple words, no BAF has given negative return over a 5-year period.

Making BAFs work for you

As promising as a BAF sounds, can you afford to put all your money in just this one scheme and forget about it?

No. Awasthi explains that just because you invest in a BAF, doesn’t mean your overall portfolio’s asset allocation is taken care of. “A BAF will not solve your personal asset allocation. Your overall goals, age and risk appetite will determine how much money should be kept in equities and how much in debt.

“BAF can considered more of a tool to manage your greed and fear. During extreme market situation, investors often feel conflicted; ‘should we buy, should we sell’? In such times, a BAF tends to come in handy with equity and debt allocation being dynamically managed,” says Chintan Haria, Head Products and Strategy, ICICI Prudential Mutual Fund. Haria says that when it comes to deciding asset allocation for the overall portfolio, an advisor is best placed to make a call.

If BAFs are so vastly different, the question remains: how do you choose one? Amol Joshi, Founder of PlanRupee Investment Services says most investors understand the counter-cyclical approach and therefore recommends funds that follow such strategies. “If SENSEX is at 60,000 levels today, investors are more afraid than when it was at 40,000," says Joshi. "The idea behind a counter-cyclical BAF is to play a foil or a buffer to equity asset class volatility; to participate in the equity upside to an extent but not at the cost of limiting downside. And thus, being unemotional and 'Buying Low Selling High' helps the fund achieve its objective," says Arpit Kapoor, fund manager of IDFC BAF at IDFC MF.

Kayezad E Adajania heads the personal finance bureau at Moneycontrol. He has been covering mutual funds and personal finance for the past two decades, having worked in Mint and Outlook Money magazine. Kayezad was the founding member of Mint’s personal finance team when it was set up in 2009.
Tags: #invest #Mutual Funds
first published: Feb 10, 2022 09:33 am