Where to invest Rs 10 lakh now, according to top money managers

They manage your money. It’s their full-time job. They spend days, weeks and months pondering over the next big investment opportunity for you. That’s what fund managers and chief executive officers of asset management companies do. Your financial advisors aren’t very different. In fact, their job is to get you to invest in the best avenues. But where do they invest their own money?

Moneycontrol asked some seasoned mutual fund CEOs and financial advisors, where they would invest Rs 10 lakh now. Here is how they said they would allocate the funds. Nearly 70 per cent of Radhika’s funds lies in balanced advantage schemes. These schemes allocate to equity and debt based on prevailing market conditions. She would invest the remaining 30 per cent in mid and small cap funds. She would consider international funds too. Radhika avoids debt funds. “I have a home loan, which I would rather pay off than put money in debt securities,” she says.

One reason why Radhika’s portfolio appears to be a bit low on risk is because she has earned ESOPs over the years. In 2014, she and her husband Nalin Moniz sold off the firm, Forefront Capital, an alternative asset management firm that they, alongwith a third person, had co-founded in 2009, to Edelweiss Group. While Radhika took over as Edelweiss mutual fund’s chief executive officer, Nalin still continues to head the group’s alternative assets business. “ESOPs are in the family and that’s why our own personal risk profile is muted,” she adds. In 2008, after the global markets crashed, her personal portfolio fell heavily, as it was heavily tilted toward equity. Both she and Nalin were in New York at that time, working in Wall Street, and had to further deal with lower bonuses and an uncertain job scene.

Lessons learnt in 2008 also made Radhika averse to leverage (loans). Now, she is eager to pay off her home loan as she is averse to taking loans. Ahmedabad-based Ashish Shah was one of the earliest distributors to sell debt mutual funds in the 1990s, having seen their tax benefits. But Shah tells us he will invest the entire sum of Rs 10 lakh only in equities.

He would start off by investing Rs 2 lakh each in shares of two companies – an insurance firm and an oil-to-telecom conglomerate, through the latter’s partly-paid shares.

Of the remaining Rs 6 lakh, Rs 4 lakh would be parked in mid-cap funds and Rs 2 lakh in small-cap schemes. But why is he avoiding debt instruments now? “I have continuous visibility of my household expenses for the next three years. My entire Rs 10 lakh can be safely put away for three years,” says Shah. He is not in need of any liquidity now. As he doesn’t have any housing loan to repay or the need to set aside any amount, currently, for his daughter’s marriage, he can do without the cash.

Shah has been a proponent of long-term gilt mutual funds and tax-free bonds. He feels that interest rates might go down further and a tactical investment in a gilt fund would bode well. 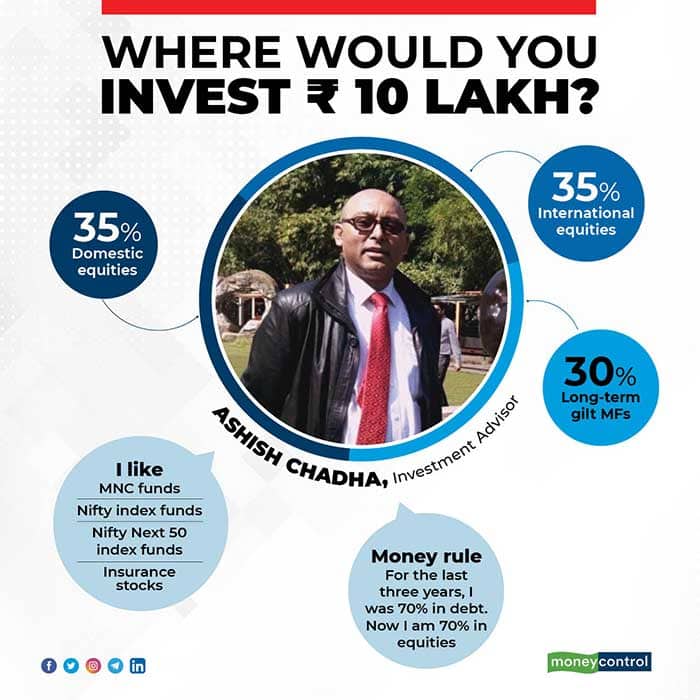 Chadha likes MNC mutual funds because “manufacturing sector would do well in India, especially after the souring of India-China relations and the rising trade deficit.”

Index funds (Nifty Next 50) and a small-cap scheme are his other preferences.

Chadha would also buy equity shares of insurance companies. “Insurance is an underpenetrated market in India. The millennial population will now understand the importance of the insurance sector due to the Covid-19 pandemic”, says Chadha.

For the 30 percent allocation to debt, Chadha prefers gilt mutual, overnight and liquid, and short-term funds. Despite interest rates having already fallen quite a bit, Chadha still sees potential in gilt funds, especially constant maturity gilt funds, for the next 10-year period. A small chunk will also be invested in gold. 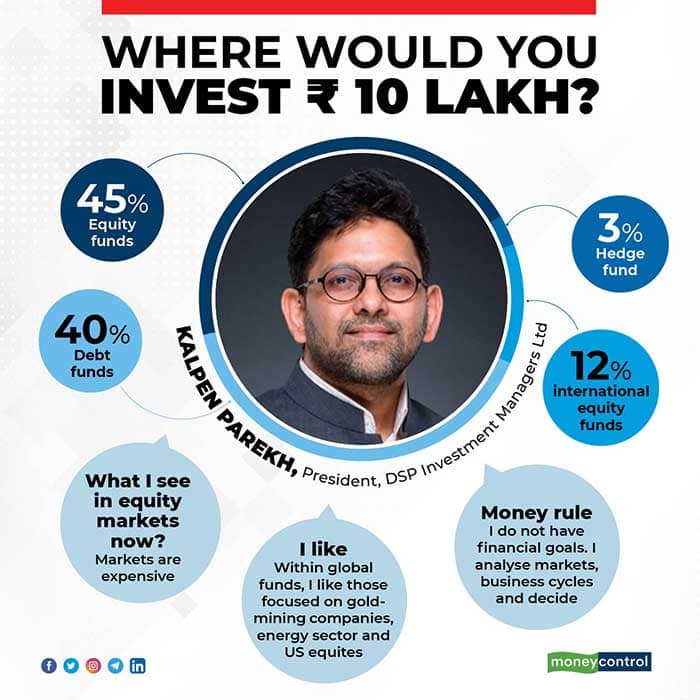 Unlike many investors, Kalpen Parekh does not have goals. He allocates funds after analysing the markets. At the moment, he would invest 45 per cent in equity funds (in DSP’s own equity funds, he insists), 40 percent in debt schemes, 12 percent in international funds and 3 percent in a hedge fund.

He perceives the markets to be expensive. For international funds, he prefers DSP World Energy, DSP World Gold and DSP US Flexible Equity. In March, Kalpen added 10 percent in equities because he found them cheaper back then. “However, now that they have run up again and I would stick to this asset allocation for some time,” he says.

Increasingly, some fund houses in India, including Kotak Mahindra mutual, PPFAS mutual and Quantum mutual have been nudging their employees to invest in the schemes managed by them. DSP, too, has adopted this as a rule. Kalpen says that about 1 percent of his overall financial portfolio is in direct equities – shares acquired about 8-10 years ago – but can’t really sell as fund managers need to comply with too many rules to buy or sell shares. Just like the others, Nilesh says he would invest 25 percent in international equities. Another 50 percent will be in Indian equities, but only in small and mid-cap schemes, and 25 percent in gold. Nilesh would invest the entire Rs 10 lakh in equities. “Since I am investing for the long run, I can afford to take risks,” he says. Besides, Nilesh says, he already has enough of his money lying in fixed-income securities.

International funds are favoured, as he can invest in businesses that are not available in India. But why no allocation to large-cap funds? Nilesh, who has managed both equity and debt funds in the past, explains that small and mid-cap stocks are at levels that they were at 5-9 years back. “The mid-cap index is at 2015 levels, currently. Many of these stocks are available cheap these days,” he says.

As far as gold is concerned, Nilesh prefers Sovereign gold bonds. “They benefit from gold price appreciation and pay a bit of interest on top of it as well,” he says. As a rule, Nilesh says he avoids chit funds and most of the corporate fixed deposits. Although he invests in real-estate, he avoids under-construction property from unknown builders. Like most fund managers, he avoids buying equity shares directly other than what he gets by way of ESOPs.