Mutual funds increase stakes in mid and small-cap stocks: Here's what they bought

Wabco India, IRCTC, Indiabulls Real Estate and Poly Medicure were among some of the preferred stocks

In a market that has witnessed a broad-based rally, mutual fund investments in mid and small-cap stocks saw an increase over the last few months. Data compiled from ACEMF shows that over the last three months, the share of mid stocks and small-cap stocks in the overall equity AUM (assets under management) increased by almost one percentage point, to 19 percent and 10 percent respectively. Meanwhile, the proportion of large-cap stocks in the overall equity AUM was decreased by two percentage points to 71 percent.

Increase in the share of mid and small-cap segments While the overall equity oriented category registered net outflows over the last eight months, the rise in the share of mid and small-cap MFs may be attributable to better performance of such stocks within these segments.

In the rally from March 2020, mid and small-cap stocks registered a remarkable recovery and outperformed their large-cap counterparts. For instance, over the last three months, the Nifty Midcap 100 TRI and Nifty Small-cap 100  TRI clocked a gain of 11.4 percent and 17.4 percent respectively, while the NIFTY 50 TRI registered an increase of only six percent over the same period.

This helped funds holding mid and small-cap stocks to delive higher returns. This, in turn, increased their asset size.

One of the reasons for this was that companies in the mid and small-cap segments started to report good results after long time. Also, as a sector, financial services had been underperforming. It has around 40 percent weight in the large-cap indices while it is 20 percent in the mid and small-cap indices. This meant that large-caps underperformed the rest of the markets”.

Kirtan A Shah, Co-Founder & CEO of SRE Wealth, attributes this allocation to a common phenomena in bull cycles. “When FIIs pump Investments, they first lap up large-caps. Once the valuations become slightly rich, the industry starts looking at peers with lower valuations; that’s when mid-caps and small-caps start getting allocations and hence midcaps are lapped up as value buys,” he explains.

In which stocks and segments did MFs invest? 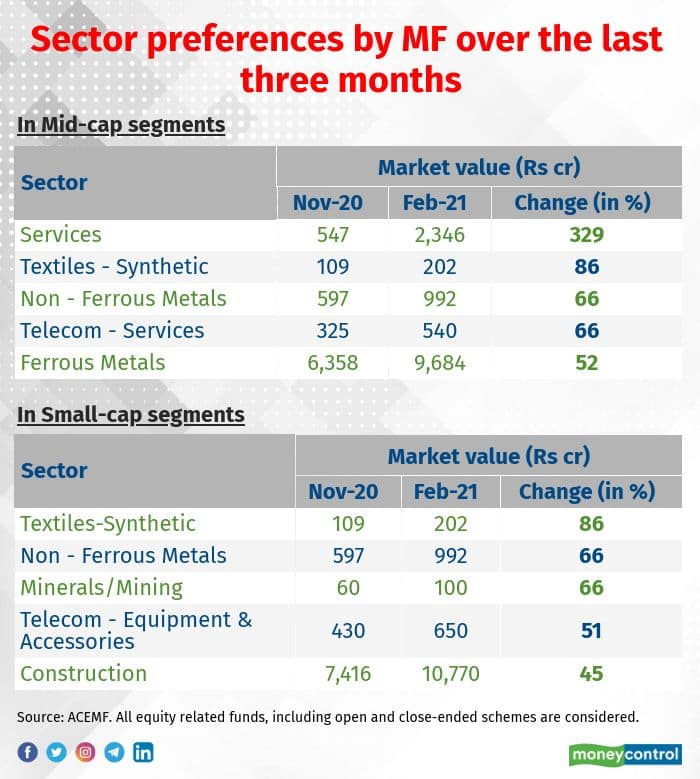 Mutual funds increased allocation to select sectors in the mid-cap space, including to services, textiles and non-ferrous metals. Textiles, non-ferrous metals and minerals/mining were the preferred sectors under the small-cap space.