Mutual funds pumped over Rs 4,000 crore into the anchor book as Life Insurance Corporation (LIC) mopped up more than Rs 5,000 crore ahead of floating its public issue on Wednesday (May 4).

Foreign portfolio investors (FPIs), pension funds, corporates and other insurers also participated in the anchor investment. At Rs 21,000 crore-issue size, the LIC IPO is the largest India has seen so far.

Mutual fund houses have their own reasons to turn anchor investors to LIC's mega-IPO. Here is what they have to say.

The LIC IPO has found takers among institutional investors due to valuation of the IPO, resizing of the issue and LCI's intent to become more digital-oriented, according to fund managers. “Initially, there was talk about two-times embedded value. Now, the IPO is getting priced at 1.1-times its embedded value. So, it is fairly priced. The share float has also been reduced to Rs 21,000 crore, with government selling 3.5 percent stake instead of 5 percent. Markets should be able to handle this kind of supply even in current global environment,” said a fund manager, whose schemes have participated in the anchor book.

“But, at the same time, we don’t expect much accretion to the value, which comes from incremental business or growth. LIC’s stock will have a lot of linkage with the markets as well. Its embedded value is dependent on how the equity market behaves. There is lot of portion that is mark-to-market. Overall, the company has much higher investments in equity,” he added. 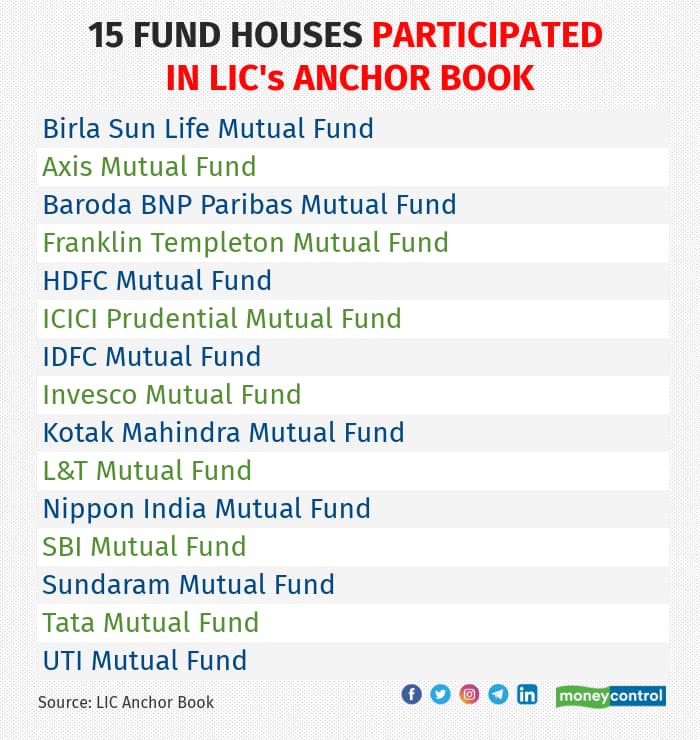 Not all mutual funds think that LIC's growth will be a major problem for the stock.

“LIC is a dominant player in an emerging market. So, it will have a reasonable growth, even though it might not be as much as its private insurance counterparts. There is still under-penetration of insurance products in India. Yes, there have been new model of distribution through digital mode, but LIC is also adapting to these changes,” said head of a second fund house, requesting anonymity.

Also read: LIC IPO: Here's how you can max out bidding for the mega public issue

The popularity of insurance product aggregators online has contributed to fall in LIC's market share. LIC has so far been dependent on its agent network, but its recent tie-up with Policybazaar shows that it wants to also make its presence on digital distribution networks.

Also read: LIC IPO | How can policyholders invest in the mega listing?

“There has been lot push all around for this IPO, whether it is the government, broking platforms, policy agents, etc. So, the awareness among retail investors for IPO has been unparalleled. I won’t be surprised if this issue sees record applications,” the mutual fund head added.

When does IPO open for others?

The LIC IPO will open on Wednesday (May 4) for all other investors, who can place their bids till the IPO window closes on May 9.

At issue size of Rs 21,000-crore, it is India’s largest IPO so far. The government was originally slated to offload 5 percent of its stake in the company, but it brought down the stake sale on offer to 3.5 percent.

The price band is set at Rs 902 to Rs 949 per equity share. Policyholders will get a discount of Rs 60 per share, while employees and retail investors will be entitled to a lower discount of Rs 45.

Jash Kriplani is a journalist with over ten years of experience. Based in Mumbai. Covering mutual funds, personal finance. His last stint was with Business Standard, where he covered mutual funds and other developments in the financial markets
Tags: #investing #IPO #IPO - News #LIC #LIC IPO #Mutual Funds
first published: May 3, 2022 10:36 am