Upcoming Webinar:Join our experts for discussion on ‘Re-inventing Finance: with Process, People & Technology’.
you are here: HomeNewsBusinessPersonal Finance

After years of volatility, gold makes a comeback, fixed income investors look ahead

The year 2018 can be best summed up in one word: uncertainty. In other words, volatility. Be it equity or debt markets, or even assets classes like gold, most asset classes were volatile. BSE Sensex closed December 18 at 36347, up 7.25 percent since the beginning of the year. The benchmark 10-year government security yield moved up from 7.34 percent at the start of the year to 8.18 percent in September and then fell to 7.35 percent today. The surprise pack of the year was gold. After being shunned by investors in the last five years, gold prices rose 7 percent in 2018.

Typically, if you wish to invest in bonds and government securities (g-secs), your preferred route so far have been mutual funds. You could still buy bonds or non-convertible debentures on the stock exchange, but what about government securities? So far, a few institutional firms had attempted to offer g-secs to retail investors but the infrastructure had limited reach.

Effective 2018, stock exchanges (BSE and the National Stock Exchange) started offering g-secs. Like equity shares and bonds, g-secs can be bought and sold in both, the primary as well as secondary market. For primary issuances, stock exchanges have started offering non-competitive bidding facility to participate in auction of government securities conducted by the Reserve Bank of India (RBI), from April 24, 2018. “The biggest advantage of this facility is one can start investing in treasury bills and government securities with as low as Rs 10,000 and the securities are issued in the demat format,” says Deepak Panjwani, head- debt markets, GEPL Capital. The reality though is, that the market for lot sizes that retail investors, typically buy in, are not liquid. It appeals to those investors who wish to stay invested throughout the instrument’s tenure. You need to have a demat account to buy government securities.

G-secs are now offered by brokers as well as through the National Stock Exchange’s app (NSE Go-Bid) or from the BSE’s website. 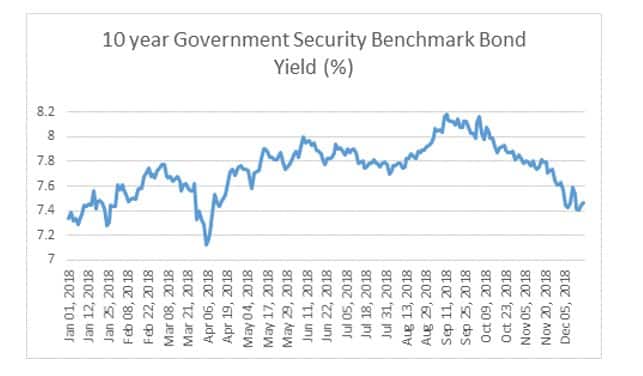 Bond yields were volatile throughout 2018. The yields went to 8.18 percent on September 11, up from 7.34 percent at the beginning of the year. Of course, it soon came down to 7.4 percent. The rising rates may not have been good news for the debt funds (g-sec funds and long-term bonds funds returned just six per cent in 2018 on an average) but it was good for small-saving schemes whose interest rates are pegged to external rates. In September, Government of India increased the interest rates offered on the small saving schemes by up to 40 basis points. National Saving Certificate, five-year time deposits with post offices, Sukanya Samriddhi Yojana and the Public Provident Fund saw their rates go up. Bank fixed deposits also went up marginally. For example, State Bank of India one year fixed deposit rate now quotes at 6.8 percent as compared to 6.25 percent last year.

The Infrastructure and Leasing Finance Company (IL&FS) crisis spooked debt fund investors and added to the mayhem in the debt markets. That liquid and ultra-short term funds were caught holding instruments issued by IL&FS and many of its subsidiaries (that defaulted and whose credit rating fell) led to outflows from debt funds. In the month of August and September, income funds saw a net outflow (more money went out than came in) Rs.33,000 crore and 38,000 crore, respectively.

After investors turn cautious with their investments in bonds, most of them preferred overnight funds. Overnight funds invest money having maturity of one day. These schemes are seen as lowest credit risk investment option by many investors. The liquid funds invest in securities with maturities of up to 91 days.

“There is no credit risk, counter party risk and interest rate risk when one invests in overnight fund. That makes safer options than the liquid funds,” says Joydeep Sen, founder of wiseinvestor.in 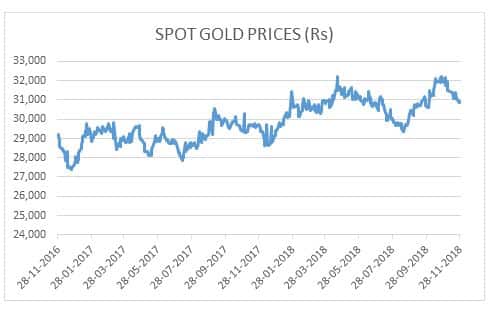 Gold prices remained volatile <see chart> and moved up by 7.21 per cent in 2018. Deteriorating global macro factors such as trade wars, rising crude oil prices and geo-political tensions pushed the gold prices up. A falling rupee against US dollar helped the gold prices in domestic market. Rupee fell to Rs 74.39 a US dollar on October 11, down from Rs 63.67 a dollar at the start of 2018. While the demand trends for gold has nothing spectacular to talk about, one data point attracted the attention of many experts. According to the World Gold Council, central bank purchases across the world have been buying more gold this year; among the highest purchases since 2015. Experts feel that larger than usual purchases of gold by central banks worldwide is seen as sign of building reserves amidst an increase of uncertain times.

In India gold exchange traded funds, scheme that offers to invest in gold and tracks the prices of gold, saw net inflow (more money came in than went out) of Rs 10 crore for the month ended November 2018. The last time the gold ETFs saw monthly net inflow was in October 2016 (the month of June 2017 was the only exception where gold ETFs saw a net inflow). In October 2016, gold ETFs had seen a net inflow of Rs 20 crore. “Volatility seen in equity makes could be a reason why investors are considering allocation to gold,” says Chirag Mehta, fund manager, Quantum Mutual Fund. He expects gold to do well in second half of the 2019 on account of possible slowdown in global economic growth, limited rate hikes by US Federal Reserve and pressure in equity markets.

The question is: Will the volatility in debt markets go down or, better still, will interest rates come down in 2019? “RBI was overestimating inflation and hence interest rates were raised earlier, this year. But in the last policy there are signs of change in stance,” says Alok Singh, chief investment officer, BOI AXA AMC. Going forward the movement in interest rates will depend upon how the inflation numbers pan out, he says. We’re watching.
Moneycontrol News
TAGS: #2018 Review #Bonds #Fixed Income
first published: Dec 19, 2018 08:21 am