Partnership with Sandoz is for the future wave of biosimilars: Biocon

The company is trying to combine forces with companies who have been successful in biosimilars, said Kiran Mazumdar Shaw, CMD, Biocon.

Biocon and Sandoz, a division of Swiss-pharmaceutical major Novartis, on Thursday said they have entered into a global partnership to develop, manufacture and commercialize multiple biosimilars in immunology and oncology for patients across the globe.

Throwing further light on the above tie-up, Kiran Mazumdar Shaw, CMD, Biocon told CNBC-TV18 that biosimilars is the generics opportunity of the future and partnership with Sandoz is for the future wave of biosimilars.

“Both partners will develop select number of assets from end to end and allows Biocon to start front-ending some of the activities – such as getting market authorisation in their name,” she said.

Furthermore, she said Sandoz is responsible for commercializing in the US and European markets and Biocon has the rest of the world market including developed markets like Japan, Australia, New Zealand. 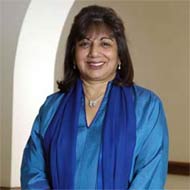 The investment cost could be north of USD 100 million apiece (biosimilar) to develop, she said.

In the foreseeable future, she said Biocon would be a significant player in the biosimilar opportunity and that is the reason they have entered into such partnership.

She said, the company is trying to combine forces with companies who have been successful in biosimilars.

With regards to Bengaluru plant, she said they are ready of re-inspection by European Medicines Agency and is confident of passing the inspection.
CNBC-TV18
Tags: #Biocon #biosimilars #Business #Mylan #Sandoz
first published: Jan 19, 2018 12:28 pm