Selected Articles from
Financial Times on Moneycontrol Pro
Upcoming Webinar :Register now for 'ULIP as an investment during economic recovery' powered by Bajaj Allianz
you are here: HomeNewsBusinessMoneycontrol Research

Consumer Durables q2 – Which Stock Should You Bet On?

From a business perspective, both Crompton and V-Guard have a strong product portfolio as well as execution capabilities and remain well positioned to capture the demand in the market.

Consumer durables companies - Crompton Greaves Consumer Electricals (CGCE) and V-Guard India reported a decent topline growth in the second quarter of FY19. However, the operating performance of both these companies came in weaker as the margins were impacted by twin hurdles of higher commodity prices and currency depreciation. Despite a subdued quarterly performance, the companies continue to expand their distribution network and are gaining market across product categories. The growth in the top line was led by Electrical consumer durables. Within this segment, revenue from fans grew 35 percent while pumps' volumes grew 25 percent as the company witnessed a strong demand from the agricultural segment. Richer product mix aided ~100 bps expansion in segmental margins for the quarter gone by.

Increased competitive intensity resulted in a subdued performance of the Lighting & fixtures segment. The revenues for the segment were 4 percent lower as the LED business continued to witness price erosion. The volumes, however, grew at a healthy pace of over 20 percent. Absence of EESL orders from municipality and government entities further dragged the topline. Lower topline along with expensive raw material imports (on account of currency devaluation) had a bearing on the margins.

The company continues to focus on driving profitability through premiumisation, product innovation and cost reduction. Crompton has launched new fans (Senorita and Dignita) under the premium range. It has also revamped its instant and storage line of geysers to tap into the customer demand during the winter season.

On the costs front, the company has started a number of initiatives to bring in operating efficiencies. CGCE has entered into direct agreements with Chinese suppliers which should result in some cost savings. The company also plans to increase sourcing from domestic suppliers to reduce the import dependency and expand in-house manufacturing capacities for key raw materials.

V-Guard's topline grew 6 percent YoY to Rs 598 crores in Q2FY19. Operating profit dropped 26 percent YoY to Rs 50 crores due to a sharp reduction in operating margins to 8.3 percent. Lower tax outgo aided the 18 percent decline in profit after tax for the quarter.

Topline growth was aided by non-south markets (up 16 percent YoY). However, Southern market (V-Guard’s core operating region) grew at only 4 percent YoY due to multiple factors including Kerala floods, relatively mild summer conditions and high base in the corresponding last year.

On a segmental basis, the growth was driven by the consumer durables segment. New product launches in the Kitchen appliances and Water heaters category aided the topline growth within the segment. Electronics business remained stagnant as the higher UPS sales were offset by weak demand for stabilizers. Electricals segment reported a mixed performance as the Switchgears & Modular Switches gained strong traction but the revenue from pump sales declined marginally.

Going forward, the company plans to add 3,000 retailers every year mainly in the non-South region and expects margins to improve on account of economies of scale. Advertisement and promotion expenses continue to remain high on account of its brand transformation exercise to position itself as a Pan-India consumer durables company. Overall, V-Guard is targeting a topline growth of 15 percent for the next few years.

India’s consumer durables market offers immense growth potential as the penetration levels of even the most basic electronics is in low double digits. Government’s focus on pan-India electrification along with affordable housing projects and rising income levels will aid the growth of the consumer durables sector.

From a business perspective, both Crompton and V-Guard have a strong product portfolio as well as execution capabilities and remain well- positioned to capture the demand in the market. Also, the competitive intensity has picked up in recent months as new players like Jaguar Lighting and Voltas Beko aggressively targeting market share in their respective product segments. 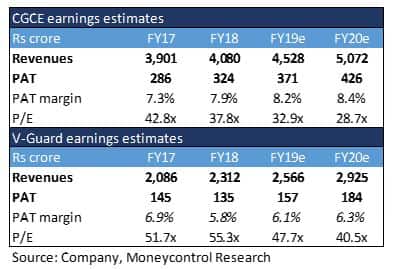 In the case of V-Guard, the incremental growth will primarily be driven by newer geographies and product categories and therefore, the business execution needs to be monitored closely. From a valuation standpoint, V-Guard (CMP: 175 and market cap: 7,470) seems priced to perfection at more than 40 times FY20 earnings.

In contrast, Crompton (CMP: 195 and market cap: 12,235) trades at a significant discount to the former and offers a favourable risk-reward ratio on a relative basis. The company is continuously working on product innovation, diversification and premiumisation and also gaining market share across segments and products.  We, therefore, advise long-term investors to make use of any dips in the stock price to slowly build positions in CGCE.
Sachin Pal
TAGS: #Companies #earnings #moneycontrol analysis #Moneycontrol Research #Recommendations #Result Analysis
first published: Oct 29, 2018 06:17 pm