Trade Spotlight | What should you do with Federal Bank, Indus Towers, Tata Teleservices on Tuesday?

Tata Teleservices is consolidating in a triangle formation and has started moving higher after finding support near Rs 120. The RSI is neutral as it finds support near the 50-mark

It was yet another weak session for the market as the benchmark indices and broader space were caught in a bear trap. The Nifty fell more than 100 points to 16,302, and the Sensex declined more than 360 points to 54,471 on May 9.

The weakening rupee against the US dollar, policy tightening by central banks to fight inflation and increasing lockdowns in China weighed on the sentiment.

All sectoral indices, barring IT, closed in the red. Metal was the biggest loser with a 2 percent loss, followed by FMCG (down 1.5 percent), and bank (down 0.91 percent).

The volatility also moved above the 22-mark, indicating more volatile swings in the market going ahead. India VIX, which measures the expected volatility in the market, rose 3.68 percent to 22.03.

Stocks that were in action included Indus Towers and Federal Bank which bucked the trend and were the biggest gainers in the futures & options segment. Tata Teleservices rallies 5 percent for the first time since April 21.

For the past four-five months, Federal Bank is moving in a range between Rs 85 and Rs 105. In the recent correction, the stock took support and formed a rejection candle at the confluence of the rising trendline and the 200-day simple moving average (SMA Rs 91.75).

Back-to-back rejection candles at support with above-average volumes indicate a bear trap in the stock. The relative strength index (RSI) indicator is also bouncing from the previous swing low of the 35-mark.

Traders and investors can expect the stock to move higher to test the upper resistance zone of Rs 105-110. The level of Rs 85 on the downside is an important support for the stock. 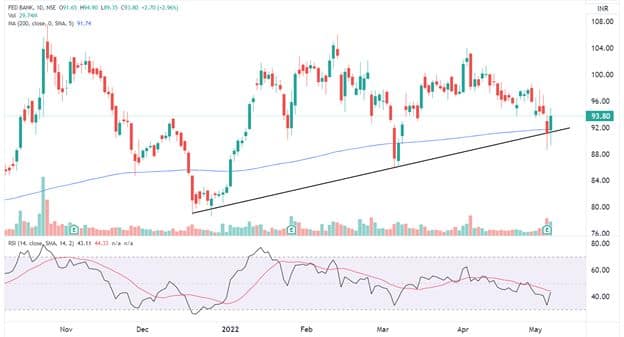 After the sharp up-move, Tata Teleservices has entered into a corrective phase as the stock made a lower high on the weekly charts.

We recommend traders and investors to use the up move towards Rs 165 and Rs 180 to exit from this counter, while Rs 125-130 is the downside support.

On mid-term charts, Indus Towers is moving with lower high and lower low formation. On short term charts, the stock is bouncing off from the supports in the Rs 195-200 zone and formed a bullish candle with above average volumes.

On short term charts, the RSI indicator is also forming a bullish divergence. Though the short-term chart is indicating to a bounce back, the mid-term trend remains weak.

Hence, we recommend the traders to use the up move towards Rs 225 followed by Rs 240 to exit the stock. A stop-loss of Rs 195 should be maintained on a daily closing basis.