Based on the open interest future percentage, a short-covering was seen in 93 stocks including Honeywell Automation, Escorts, Tata Chemicals, Polycab India, and HDFC AMC

The market clocked more than half a percent gain and closed at a fresh four-month high, continuing the uptrend for the sixth consecutive session on August 16. Positive global cues supported the market, while auto, banking and financial services, oil and gas, and select metal and pharma stocks aided the rally.

The benchmark indices had a gap-up opening on Tuesday. The BSE Sensex rose 379 points to 59,842, while the Nifty50 climbed 127 points to 17,825 and formed a Doji kind of candlestick pattern on the daily charts.

"The Nifty is now placed at the edge of a significant overhead resistance of down sloping trend line (downtrend line connected from the important lower tops) around 17,850-17,900 levels. This is a positive indication and suggests that the hurdle could be taken out on the upside soon," Nagaraj Shetti, Technical Research Analyst at HDFC Securities said.

Maximum Call open interest of 25.66 lakh contracts was seen at 18,000 strike, which will act as a crucial resistance level in the August series.

Maximum Put open interest of 29.57 lakh contracts was seen at 17,500 strike, which will act as a crucial support level in the August series.

A high delivery percentage suggests that investors are showing interest in these stocks. The highest delivery was seen in HDFC Asset Management Company, Power Grid Corporation of India, HDFC, HCL Technologies, and HDFC Bank, among others. 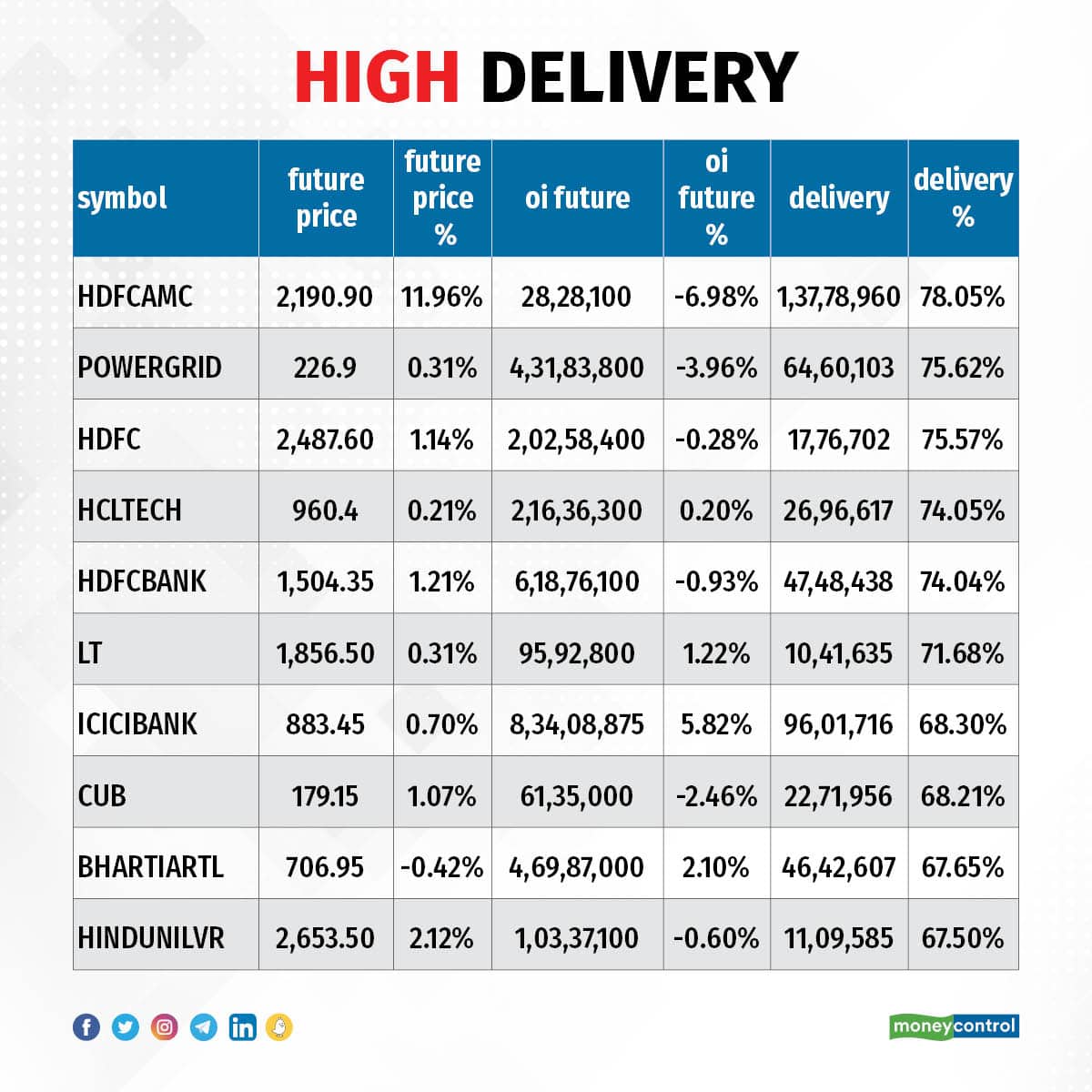 An increase in open interest, along with an increase in price, mostly indicates a build-up of long positions. Based on the open interest future percentage, here are the top 10 stocks including Ambuja Cements, Godrej Consumer Products, Apollo Tyres, Nippon Life India, and Gujarat Gas, in which a long build-up was seen. A decline in open interest, along with a decrease in price, mostly indicates a long unwinding. Based on the open interest future percentage, here are the top 10 stocks including JK Cement, Bank of Baroda, Bharat Forge, Dabur India, and JSW Steel, in which long unwinding was seen. An increase in open interest, along with a decrease in price, mostly indicates a build-up of short positions. Based on the open interest future percentage, here are the top 10 stocks including Muthoot Finance, Metropolis Healthcare, PVR, Zee Entertainment Enterprises, and Gujarat State Petronet, in which a short build-up was seen. A decrease in open interest, along with an increase in price, mostly indicates a short-covering. Based on the open interest future percentage, here are the top 10 stocks including Honeywell Automation, Escorts, Tata Chemicals, Polycab India, and HDFC AMC, in which short-covering was seen. Ramco Cements: Officials of the company will attend investors' meets in Singapore, organised by B & K Securities.

Repco Home Finance: Officials of the company will meet analysts and investors.

Vedant Fashions: Officials of the company will meet analysts.

Cipla: The stock will be in focus after the company said it appointed Ashish Adukia as global Chief financial officer. Dinesh Jain was relieved from additional responsibility as interim chief financial officer of the company. Jain will continue as senior vice president and head of corporate finance. The company also said that the US food and drug administration has begun inspection of the Goa plant today. Goa facility was issued a warning letter in February 2020.

SBI Cards and Payment Services: The stock will be in focus after Informist reported that the Reserve Bank of India is against unregulated firms issuing credit cards. Also, the company can offer credit cards after getting an RBI licence, the report said.

Hindustan Zinc: A PTI report said ICICI Securities, Axis Capital and Citigroup Global Markets are among the five investment bankers selected to manage the sale of the government's 29.53 percent residual stake in the company. The Department of Investment and Public Asset Management (DIPAM) had in early July invited bids from merchant bankers for managing Hindustan Zinc Ltd (HZL) residual stake and set July 28 as the deadline for putting bids.

Bharat Gears: The company will consider a bonus share issue on August 19.

Three stocks - Balrampur Chini Mills, Delta Corp and Tata Chemicals - are under the NSE F&O ban list for August 17. Securities in the ban period under the F&O segment include companies in which the security has crossed 95 percent of the market-wide position limit.

Disclaimer: The views and investment tips expressed by investment experts on Moneycontrol.com are their own and not those of the website or its management. Moneycontrol.com advises users to check with certified experts before taking any investment decisions.
Sunil Shankar Matkar
Tags: #Market Cues #Market Edge #Nifty #Sensex #Trade Setup #video
first published: Aug 16, 2022 10:53 pm