Trade setup for Tuesday: Top 15 things you should know before Opening Bell

Maximum put OI of 60.7 lakh contracts was seen at strike price 10,500, which will act as a crucial base for February series.

The 50-share NSE Nifty which started with a big gap on the downside on Monday managed to recoup some losses but closed with a loss of nearly 100 points from Friday’s close, forming a bullish candle on an intraday basis as the closing level was higher than the opening level.

The index witnessed a strong recovery in the trading session but the sentiment still remained bearish. The Nifty has strong support near 10,600-10,500 levels.

The Nifty50 which opened at 10,604 slipped to an intraday low of 10,586. It closed below its crucial 50-day exponential moving average (DEMA). Hence, a pullback could be on cards as 50-DEMA has usually lent a strong support to the index in the past.

The index bounced back after falling below 10,600 to hit an intraday high of 10,702 before closing 94 points lower at 10,666 levels. The index is likely to remain choppy or consolidate further ahead of the Reserve Bank of India’s 2-days policy meet.

“Huge gap-down opening was bought into by the market participants as Nifty50 recouped almost 100 points from intraday low of 10,586 which resulted in bullish candle on intraday basis but still remained a bearish formation as it closed in negative terrain when compared to last session’s close,” Mazhar Mohammad, Chief Strategist – Technical Research & Trading Advisory, Chartviewindia.in told Moneycontrol.

“Monday’s gap down area of 10,702–10,736 shall offer resistance for next couple of days and a close above 10,736 shall be considered as an initial sign of strength for short term,” he said.

Mohammad further added that as the market is heading into RBI event it may remain choppy for the next two sessions post which major directional clues shall emerge for this market which as of now are on the downside. “Short term support is available around 10,550 whereas critical support is placed at 10,394,” he said.

We have collated the top fifteen data points to help you spot profitable trade: 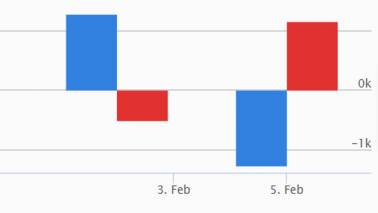 An increase in open interest along with a decrease in price mostly indicates short positions being built up.

Abbot India: A meeting of the Board of Directors of the company is scheduled to be held on February 14, 2018 to consider and approve the text of unaudited financial results for the third quarter and nine months ended on December 31, 2017.

Cera Sanitaryware: The Company will be participating in Edelweiss India Conference 2018 to be held in Mumbai on February 7, 2018.

Rolta India: A meeting of the Board of Directors will be held on February 14, 2018, to consider and take on record, the unaudited consolidated & unaudited standalone financial results for the quarter and nine months ended December 31, 2017.

Religare Enterprises: A meeting of the Board of Directors will be held on on February 14, 2018, to consider and take on record, the unaudited standalone financial results for the quarter and nine months ended December 31, 2017.

HPCL: A meeting of Board of Directors will be held on February 9, 2018 to consider the unaudited financial results for the third quarter  ended December 31, 2017.

Oil India Limited: The Board may consider issue of bonus shares in the Board Meeting scheduled to be held on February 9, 2018.

Greaves Cotton Ltd: The Company has declared an interim dividend of Rs 4 per equity share of the face value of Rs 2 for the financial year ending March 31, 2018.

Sun Pharma says fire was observed at solvent stage area at Ankaleshwar plant. No direct loss of production due to this

Ruchi Soya announces expression of interest for investment in the Company

4 stocks under ban period on NSE

Security in ban period for the next trade date under the F&O segment include companies in which the security has crossed 95 percent of the market-wide position limit.

The security which are banned for trading are Fortis, HDIL, India Cements, and Wockhardt.Get access to India's fastest growing financial subscriptions service Moneycontrol Pro for as little as Rs 599 for first year. Use the code "GETPRO". Moneycontrol Pro offers you all the information you need for wealth creation including actionable investment ideas, independent research and insights & analysis For more information, check out the Moneycontrol website or mobile app.