Weak global cues, muted results from India Inc, zero sales from top auto manufacturers in April, an extension of lockdown by another two-weeks and contraction in manufacturing activity led to profit-taking on D-Street on May 4 after a sharp 14 percent rally seen in benchmark indices in April.

Investors lose nearly Rs 6 lakh crore in a single trading session. The average market capitalisation of the BSE-listed companies fell from Rs 129.41 lakh crore recorded on April 30 to Rs 123.69 lakh crore on May 4.

"The abrupt end of the recovery has certainly caught the participants completely off-guard and we might see the index drifting lower ahead," Ajit Mishra, VP - Research, Religare Broking, said.

"With no major development on the local front, we feel the global cues would continue to dictate the market trend. However, any news on a stimulus package for ailing sectors may provide a breather.

Besides, earnings announcement would continue to induce stock-specific volatility so participants should plan their trades accordingly," he added.

Maximum call OI of 12.12 lakh contracts was seen at the 9,500 strike. It will act as crucial resistance in the May series.

Maximum put OI of 13.03 lakh contracts was seen at 9,500 strike, which will act as crucial support in the May series.

No put writing was seen on May 4.

Based on OI future percentage, here are the top 10 stocks in which long unwinding was seen.

An increase in OI, along with a decrease in price, mostly indicates a build-up of short positions. Based on OI future percentage, here are the top 10 stocks in which short build-up was seen. 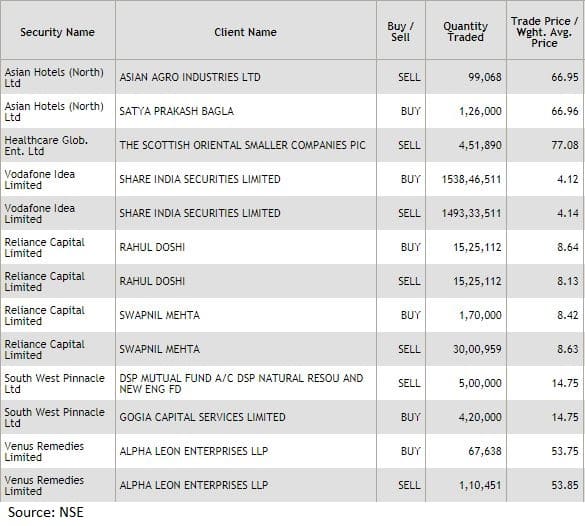 Aruna Hotels: The board will meet on May 5 for general purposes.

Punjab & Sind Bank: The board will meet on May 5 for general purposes.

​Automotive Axles resumed operations of factories and offices at Mysuru and Rudrapur.

Foreign (FIIs) and domestic institutional investors (DIIs) sold shares worth Rs 1,373.98 crore and Rs 1,661.61 crore, respectively, in the Indian equity market on May 4, provisional data available on the NSE showed.

Stock under F&O ban on NSENo security is under the F&O ban for May 5. Securities in the ban period under the F&O segment include companies in which the security has crossed 95 percent of the market-wide position limit.