Positive global cues and buying in most sectors helped benchmark indices gain eight-tenth of a percent on June 27, thereby extending their uptrend for the third consecutive session.

The BSE Sensex jumped 433 points to 53,161, while the Nifty50 rose 133 points to 15,832 and formed a bearish candle which resembles a Bearish Belt Hold kind of pattern on the daily charts.

"Technically, this action signals a choppy movement in the market after a gap up opening. The crucial overhead resistance of 15,800 levels (previous swing lows, as per the concept of change in polarity) has been taken out on the upside. But, the lack of further upside post upside breakout and a formation of rangebound action subsequently after the opening could dampen the effort of bulls to sustain the highs," Nagaraj Shetti, Technical Research Analyst at HDFC Securities said.

Display of lack of strength to sustain the highs during upside breakout is likely to result in further consolidation or downward correction from the highs, the market expert said.

On the other side, a decisive upmove above 15,900 could lead to further upside towards another hurdle of 16,200 levels, Shetti said.

The broader space also participated in the rally, with the Nifty Midcap 100 index rising 1 percent and Smallcap 100 index climbing 2 percent on positive market breadth. However, experts said having volatility above 20 levels could keep the trend more favourable for bears than bulls. India VIX, the fear index, rose by 2.2 percent to 21 levels.

Maximum Call open interest of 85.73 lakh contracts was seen at 16,000 strike, which will act as a crucial resistance level in the June series.

Maximum Put open interest of 86.03 lakh contracts was seen at 15,000 strike, which will act as a crucial support level in the June series.

A high delivery percentage suggests that investors are showing interest in these stocks. The highest delivery was seen in HDFC, Power Grid Corporation, Ambuja Cements, Colgate Palmolive, and Bata India, among others. 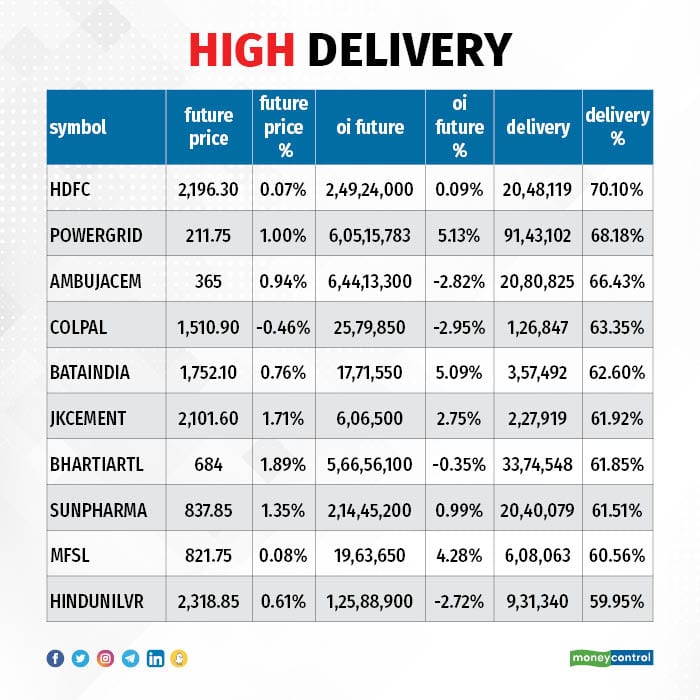 An increase in open interest, along with an increase in price, mostly indicates a build-up of long positions. Based on the open interest future percentage, here are the top 10 stocks including Nifty Financial, Ipca Laboratories, City Union Bank, Polycab India, and ONGC, in which a long build-up was seen. A decline in open interest, along with a decrease in price, mostly indicates a long unwinding. Based on the open interest future percentage, here are the top 10 stocks including Voltas, Strides Pharma Science, Hero MotoCorp, Balrampur Chini Mills and Colgate Palmolive, in which long unwinding was seen. 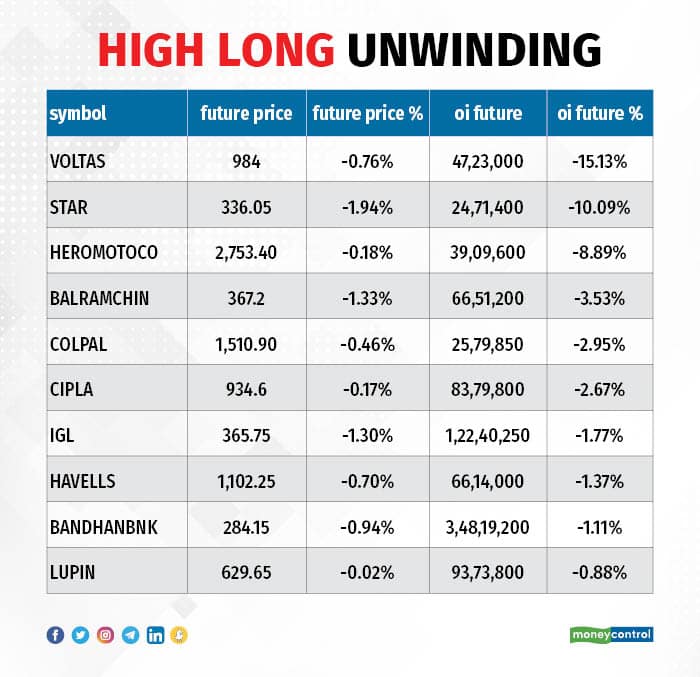 An increase in open interest, along with a decrease in price, mostly indicates a build-up of short positions. Based on the open interest future percentage, here are the top 10 stocks including ABB India, Torrent Pharma, Eicher Motors, Indian Hotels, and L&T Finance Holdings, in which a short build-up was seen. A decrease in open interest, along with an increase in price, mostly indicates a short-covering. Based on the open interest future percentage, here are the top 10 stocks including Alembic Pharma, Ramco Cements, Bosch, AU Small Finance Bank, and Hindustan Copper, in which short-covering was seen. 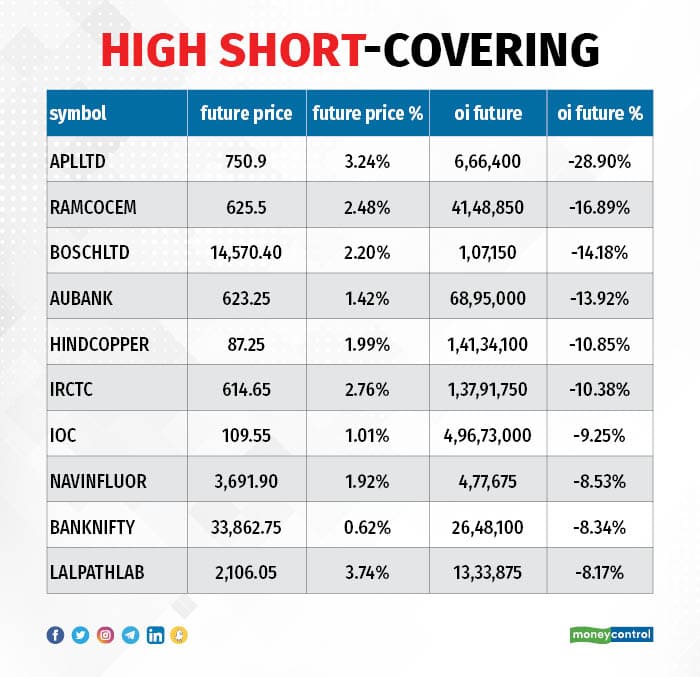 Dhani Services: Societe Generale sold 46,87,351 equity shares in the company via open market transactions. These shares were sold at an average price of Rs 29.55 per share. Tata Steel: Officials of the company will meet Jefferies India, and JP Morgan.

MCX India: Officials of the company will meet SageOne Investments.

Mahindra & Mahindra: Officials of the company will meet several funds and investors in non-deal roadshow in New York.

Polycab India: Officials of the company will meet Axis Capital.

Sterling Tools: Subsidiary Sterling Gtake E-mobility (SGEM) forayed into E-LCV segment. With this development, SGEM continues to grow its presence across various E-mobility segments. Starting with supplies to a single Electric 2W customer a year back, the company now has confirmed orders from more than 10 customers.

Bilcare: The company said the board has appointed Shreyans Bhandari as Additional Director and Chairman & Managing Director of the company. He is the son of Mohan Bhandari, earlier Chairman and MD, who is now appointed as Chief Executive Officer.

Star Health and Allied Insurance: The health insurance company has signed a Corporate Agency agreement with IDFC FIRST Bank, for distribution of its health insurance solutions to the bank's customers.

Capri Global Capital: APV Tradesol Pvt Ltd and PACs sold 2.055 percent stake in the company via open market transactions. With this, their shareholding in the company stands reduced to 6.102 percent, down from 8.156 percent earlier.

Brigade Enterprises: Brigade Group has signed joint development agreement to develop 2.1 million square feet of residential apartments in Chennai. Brigade targets revenue of Rs 6,000 crore from its residential business over the next 5 years in the city.

Indian Card Clothing: The company said the board has declared special interim dividend of Rs 25 per share on face value of Rs 10 each for the financial year 2022-23. The board has also given approval for acquiring balance 40% equity stake in Garnett Wire, UK – foreign subsidiary of the company, from the Joint Venture Partner – Joseph Sellers & Son Limited.

Two stocks - Delta Corp and Sun TV Network - are under the NSE F&O ban for June 28. Securities in the ban period under the F&O segment include companies in which the security has crossed 95 percent of the market-wide position limit.

Disclaimer: The views and investment tips expressed by investment experts on Moneycontrol.com are their own and not those of the website or its management. Moneycontrol.com advises users to check with certified experts before taking any investment decisions.
Sunil Shankar Matkar
Tags: #Market Cues #Market Edge #Nifty #Sensex #Trade Setup #video
first published: Jun 27, 2022 09:25 pm