Nifty continued to rally on September 11 for the fifth consecutive session, its longest streak in almost 6 months, supported by positive global cues on the back of easing US-China tensions.

Hopes of further stimulus by the government and GST rate cut on auto also gave a leg up to investor sentiment.

After opening higher, the index remained rangebound with a positive bias throughout the session, eventually closing with a gain of 33 points, or 0.30 percent, at 11,035.70, with 25 stocks up and 25 down.

The index maintained the psychological 11,000 level and saw a lot of resistance in the range of 11,050-11,100 levels, forming small-bodied bullish candle which resembles a Doji kind of pattern on daily charts.

The formation of a Doji candle after a bullish candle indicates there is some indecisiveness among the bulls as well as the bears.

"Even though Nifty50 closed in a positive terrain trading range remained extremely narrow with 44 points but on the back of stronger positive advance/decline ratio as 2 stocks rallied for every single stock declined. However, this narrow range should be a cause for concern as Nifty failed to sustain above its resistance point of 11,042 levels on a closing basis," Mazhar Mohammad, Chief Strategist – Technical Research & Trading Advisory, Chartviewindia.in, told Moneycontrol.

"Technically, with the Nifty rallying further and taking out its recent highs, the bulls do seem to have an upper hand for the short term at least. Further upsides are likely in the near term once the immediate resistance of 11,055 is taken out. Crucial supports to watch for resumption of weakness are at 11,012-10,957," said Deepak Jasani, Head of Retail Research, HDFC securities.

Bank Nifty has been forming higher highs – higher lows from last four trading sessions and supports are shifting higher. The index closed 1 percent higher at 27,776.20 and formed a bullish candle on the daily scale.

India VIX fell by 3.01 percent to 15.37 levels. It has been making lower highs – lower lows from the last four sessions and recently corrected from 18.31 to 15 zones which is giving some stability to the market.

Maximum call open interest (OI) of 23.58 lakh contracts was seen at the 11,200 strike price. It will act as a crucial resistance level in the September series.

Maximum put open interest of 34.7 lakh contracts was seen at 10,800 strike price, which will act as crucial support in September series. 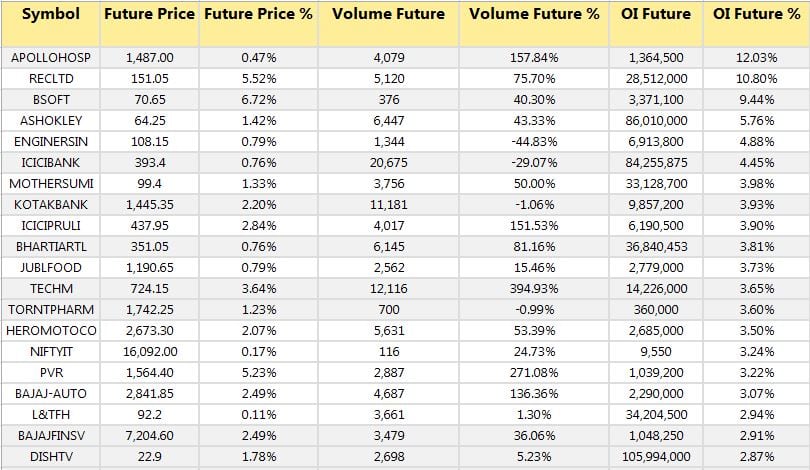 Country Club Hospitality & Holidays: The annual general meeting (AGM) of the company will be held on September 30.

Ajcon Global: The board will meet on September 12 for the discussion of quarterly results.

Centrum Capital: The board of directors will meet on September 12 to consider and approve the unaudited financial results for the quarter ended June 30, 2019.

Canara Bank: The board of the bank will meet on September 13 to discuss preferential issue of shares.

Unitech: The board of Unitech will meet on September 14 to consider and approve quarterly results.

Sankheshwar Holding Company: The company infomed exchnages regarding the acquisition of shares of Nahar Capital & Financial Services through Inter-se transfer among the promoter group.

Alkem Laboratories: The company in a regulatory filing said the inspection of its manufacturing facility at St. Louis, Fenton Logistics Park, USA by the USFDA has now been closed. The cite was inspected from August 16, 2019 to August 22, 2019 and the company had received a Form 483, containing four observations.

Khadim India: The company said Namrata Ashok Chotrani, Non - Executive, Non - Independent Director of the company has resigned from the board of directors of the company due to personal reason, effective September 11.

Titan Company: ICRA has assigned "ICRA A1 +" rating on the company's commercial paper of worth Rs 900 crore.

Dr. Reddy's Laboratories: The company announced the launch of Fosaprepitant for Injection in the US market, approved by the US Food and Drug Administration (USFDA).

L&T Finance Holdings: The board of directors has approved the offer and issuance of up to 1,00,00,000 cumulative compulsorily redeemable non-convertible preference shares (CRPS) of the face value of Rs 100 on a private placement basis.

For September 12, not a single stock is under F&O ban. Securities in ban period under the F&O segment include companies in which the security has crossed 95 percent of the market-wide position limit.