One stock - RBL Bank - is under the F&O ban for April 11. The stock fell 10 percent in last four consecutive sessions.

The buying interest was returned to the market again after selling pressure for the previous three straight sessions, on April 8. Keeping policy rates unchanged with increasing inflation forecast and lowering growth estimates by the Reserve Bank of India, as well as positive global cues supported the market sentiment.

The BSE Sensex jumped more than 400 points to 59,447, while the Nifty50 rose 145 points to 17,784 and smartly defended the 17,600 mark, forming a bullish candle on the daily charts as the closing levels were higher than opening levels. On the weekly charts, there was a Doji kind of pattern formation as closing was near opening levels. The index settled with six-tenth of percent gains during the week.

"Technical trends were sending mixed signals as the daily chart is hinting at a short-term bottom but on the weekly scale, an indecisive Doji had been formed, raising questions mark about the up move which is in progress from the lows of 15,671 over a period of five weeks," Mazhar Mohammad, Founder & Chief Market Strategist at Chartviewindia, said.

According to him, if the Nifty sustains above 17,600, the bulls can retest recent highs of 18,100 but "a close above 18,115 shall result in a fresh breakout, paving the way for a sustainable up move with much bigger targets.

For the time, positional traders with high risk-taking ability can consider long-side bets but with a stop-loss below 17,600 levels, he advised.

The broader markets were supported by bulls on Friday as well as during the week. The Nifty Midcap index gained 1 percent on Friday and 3.6 percent for the week, while the Nifty Smallcap index rose 0.4 percent and 2.7 percent respectively.

Maximum Call open interest of 22.08 lakh contracts was seen at 18,000 strike, which will act as a crucial resistance level in the April series.

Maximum Put open interest of 28.95 lakh contracts was seen at 17,500 strike, which will act as a crucial support level in the April series.

A high delivery percentage suggests that investors are showing interest in these stocks. The highest delivery was seen in Marico, Max Financial Services, Ipca Laboratories, Tech Mahindra, and Colgate Palmolive, among others. 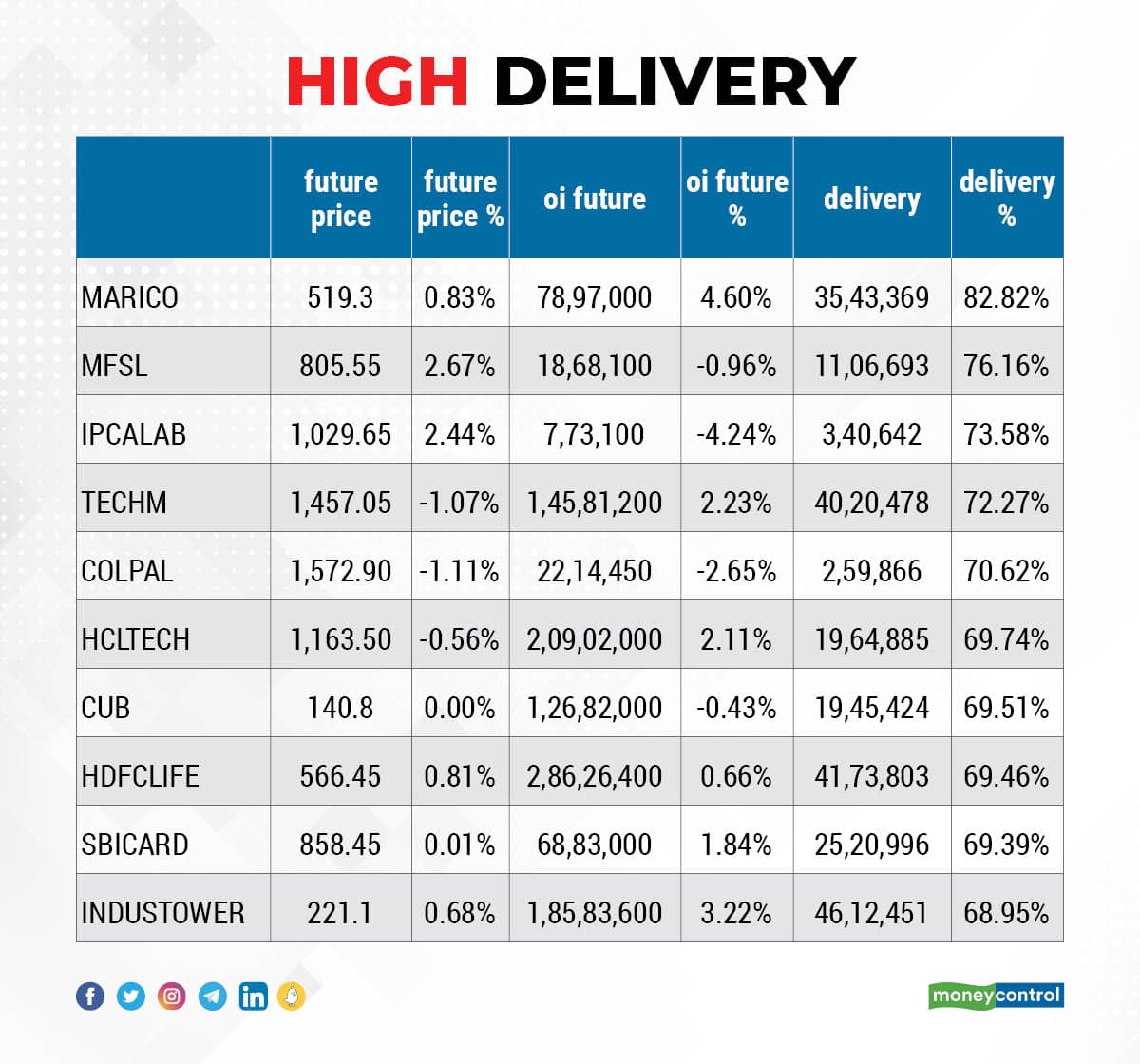 An increase in open interest, along with an increase in price, mostly indicates a build-up of long positions. Based on the open interest future percentage, here are the top 10 stocks including Syngene International, Cholamandalam Investment, Persistent Systems, Polycab India, and Vodafone Idea, in which a long build-up was seen. A decline in open interest, along with a decrease in price, mostly indicates a long unwinding. Based on the open interest future percentage, here are the top 10 stocks including NBCC, Colgate Palmolive, Gujarat State Petronet, PFC, and Atul, in which long unwinding was seen. 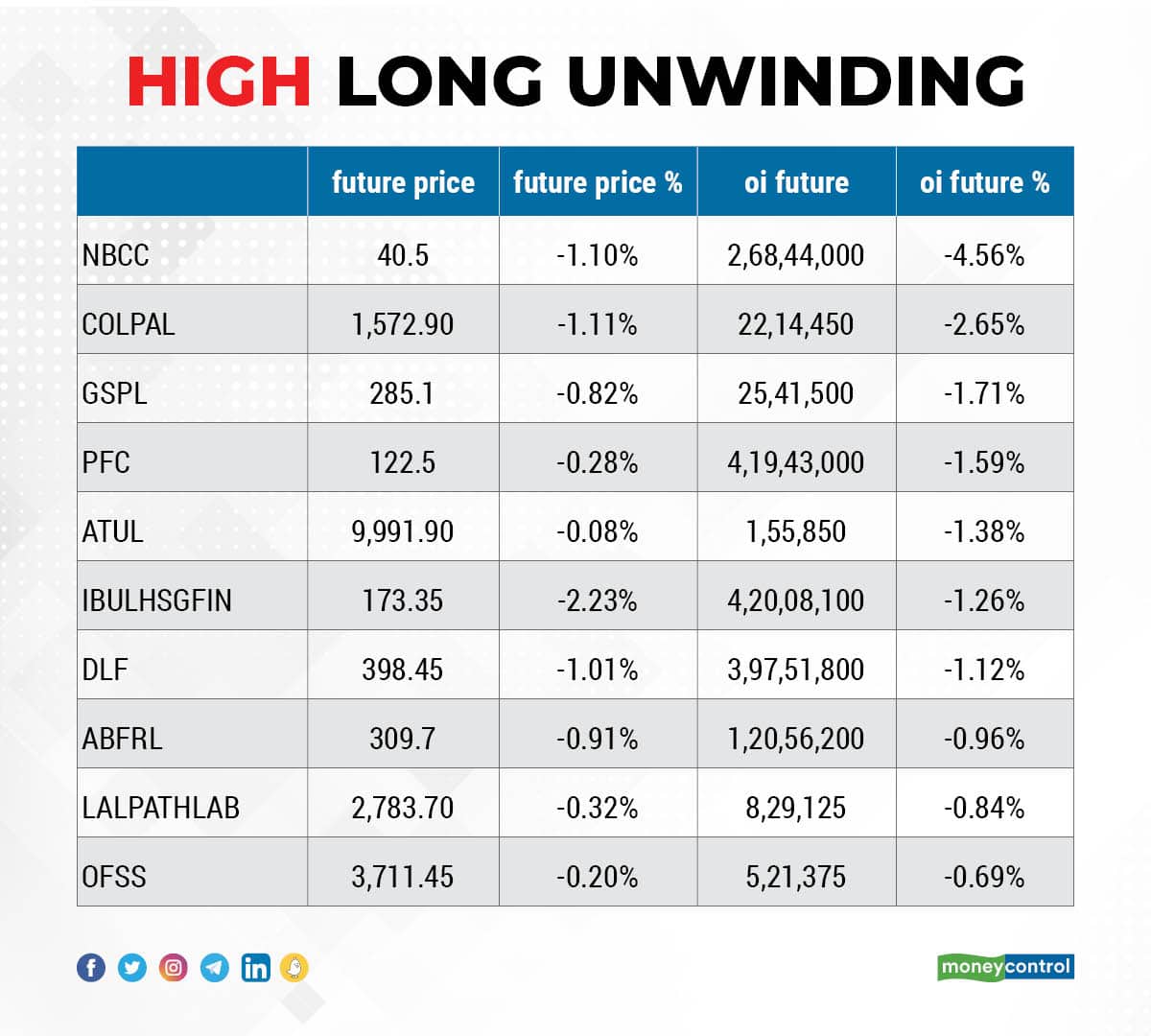 An increase in open interest, along with a decrease in price, mostly indicates a build-up of short positions. Based on the open interest future percentage, here are the top 10 stocks including RBL Bank, HDFC Bank, Oberoi Realty, Astral, and Nippon Life India Asset Management, in which a short build-up was seen. A decrease in open interest, along with an increase in price, mostly indicates a short-covering. Based on the open interest future percentage, here are the top 10 stocks including Godrej Consumer Products, United Breweries, Ashok Leyland, Bharat Electronics, and Gujarat Gas, in which short-covering was seen. 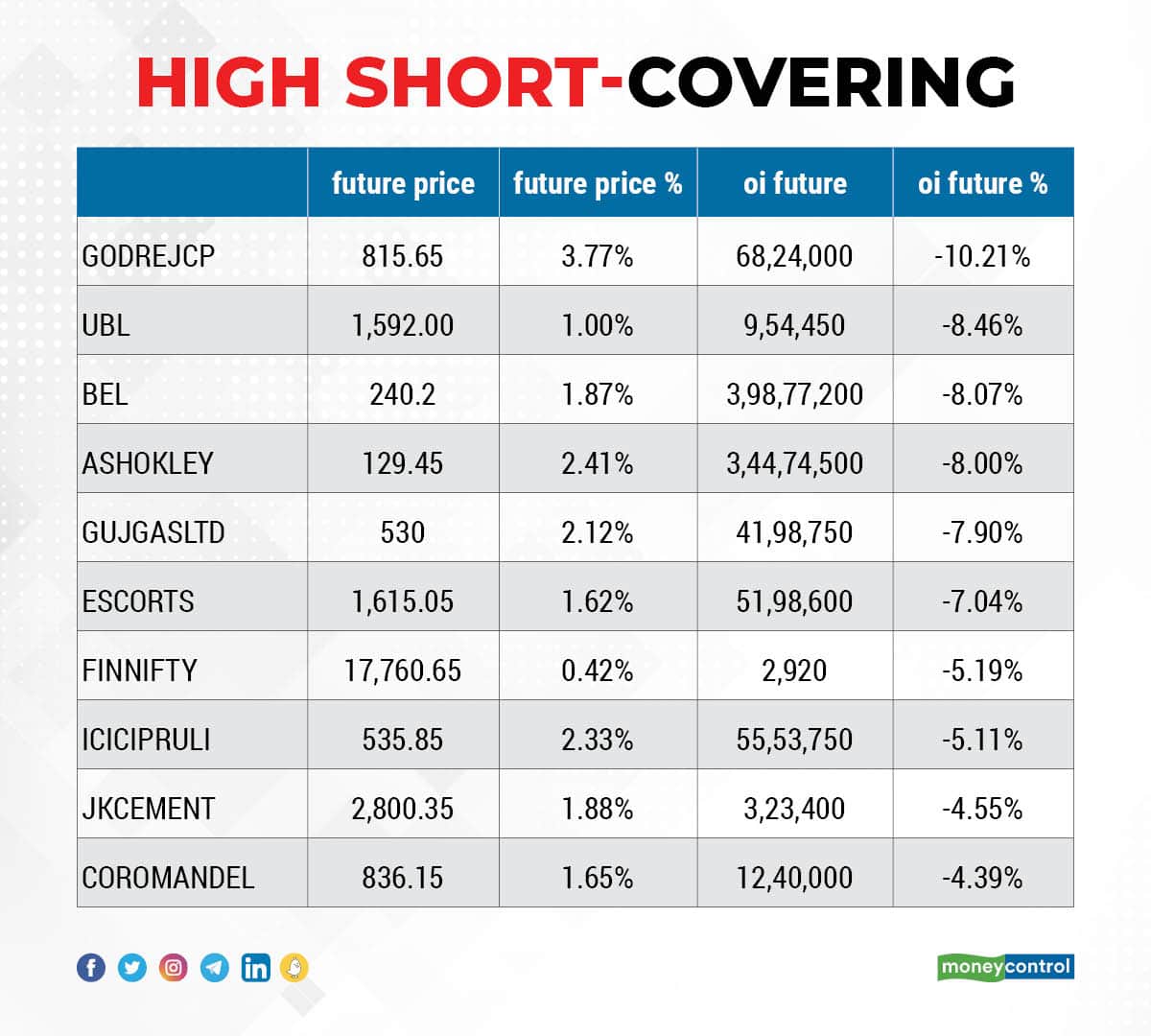 Uma Exports: Purple Entertainment sold 2,07,583 equity shares at an average price of Rs 83.75 per share. The stock was locked in 5 percent upper circuit for yet another session on Friday, after a strong debut on Thursday. Veranda Learning Solutions: The company will make its debut on the bourses on April 11.

GTPL Hathway: The digital cable TV and broadband service provider said its profit after tax for March 2022 quarter declined 4.3 percent to Rs 54.5 crore and revenue fell 17.5 percent to Rs 617.3 crore compared to the year-ago period largely due to fall in EPC project business, but its ex-EPC profit grew by 1 percent and revenue rose by 4 percent YoY during the quarter. The stock has gained 16.5 percent in the past 1 week and has gained 7.1 percent in the past one month.

Tata Steel: The National Company Law Tribunal has approved the Resolution Plan submitted by Tata Steel Mining, a wholly-owned subsidiary of Tata Steel, for the acquisition of Rohit Ferro-Tech.

SMS Lifesciences India: The United States Food and Drug Administration (USFDA) has completed an inspection of the company's API manufacturing facility located at Sangareddy district, Telangana (Unit I) without any observations. The inspection commenced on April 4 and concluded on April 8.

Seamec: The company along with consortium partner Posh India Offshore has entered into an understanding with infrastructure major Larsen & Toubro. The consortium will undertake diving-related and other associated work through deployment of vessel "SEAMEC PRINCESS" for ONGC work of pipeline replacement project VII. The total combined value of the contract to consortium is $101 million. The stock is trading flat since the past one week but has gained 31 percent during the past one month.

Tata Motors: Luxury car maker Jaguar Land Rover continued to face the risk of global semiconductor shortage, as its retail sales fell sharply by 36 percent year-on-year to 79,008 vehicles in Q4FY22 and the sequential decline was just 1.4 percent. Jaguar brand recorded sales of 14,574 units for the March 2022 quarter, down 37.9 percent and Land Rover reported sales of 64,434 units, down 35.6 percent compared to year-ago period. Despite the impact of the semiconductor shortage on production and sales, the company said it continued to see strong demand for its products with global retail orders at over 1,68,000 units as of March 2022.

One stock - RBL Bank - is under the F&O ban for April 11. The stock fell 10 percent in last four consecutive sessions. Securities in the ban period under the F&O segment include companies in which the security has crossed 95 percent of the market-wide position limit.

Disclaimer: The views and investment tips expressed by investment experts on Moneycontrol.com are their own and not those of the website or its management. Moneycontrol.com advises users to check with certified experts before taking any investment decisions.
Sunil Shankar Matkar
Tags: #Market Cues #Market Edge #Nifty #Sensex #Trade Setup #video
first published: Apr 10, 2022 06:10 pm