Nifty came out of its long consolidation of more than last two months and kept soaring to new highs for the entire month of August. It finally concluded the series with gains of 5.44 percent and made higher highs - higher lows from the last four weeks. Stock-specific action steamed the index higher with gradual shift in its support zones. It concluded the August expiry at 16,636 levels and formed a healthy Bullish candle on monthly chart (expiry to expiry chart).

The open interest activity in Nifty had shot in the series and the open interest increased by 37.09 percent on expiry-to-expiry basis. Rollover of Nifty stood at 83.98 percent, which is higher than its quarterly average of 81.55 percent. The high rollover figure is due to the longs which are built in the index at higher levels.

Though the benchmark indices concluded the August series on a good momentum at near its life time high zones, market breadth remained slightly in favour of the declining counters as Mid-cap and Small-cap space witnessed some profit booking decline after the strong rally of the last five quarters.

India VIX increased by 4.55 percent from 12.94 to 13.53 levels in August series. Volatility is slightly on the rise but cool down from recent swing highs has again given a buy on decline stance to the market and now it needs to hold below 12 zones to get more buying interest in the broader market. 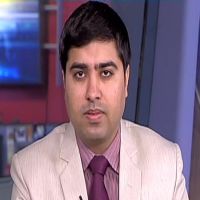 FIIs continue to remain net sellers in the cash market segment and cumulatively sold equities worth almost Rs 11,600 crore in the August series. On the other hand, DIIs were net buyers by more than Rs 11,400 crore. Their 'Long Short Ratio' in index futures ranged from 60.78 percent to 70.39 percent in the August series.

Considering overall derivatives activity, we are expecting Nifty to continue the high spirits and sustain at higher zones. A move above 16,700 mark may result into an upmove towards 17,000 zone. On the flipside, major support remains intact at 16,300 and then 16,100 zone.

Bank Nifty started on a positive note but remained range bound thereafter. It weakened below 34,600 but pulled back in the concluding week and closed above 35,600 levels. Banking stocks were seen picking up in the latter part of the month and saw momentum. Short covering was seen in the August series as open interest has decreased by 24.60 percent on expiry-to-expiry basis.

Rollover in Bank Nifty also stood at 79.08 percent, which is lower than its quarterly average of 82.79 percent. Rollover data indicates that shorts are shedding in the banking index and thus, it will soar to higher levels and regain strength after surpassing its immediate hurdles. Crucial support for banking index is placed at 35,000 and then 34,500 zone. On the flipside, immediate resistance can be seen around 36,250 and then a fresh rally could be seen towards 37,000 zone.

Disclaimer: The views and investment tips expressed by investment expert on Moneycontrol.com are his own and not that of the website or its management. Moneycontrol.com advises users to check with certified experts before taking any investment decisions.
Chandan Taparia is the Vice President and Analyst-Derivatives at Motilal Oswal Financial Services Limited.
Tags: #Expert Columns #FuturesnOptions #Nifty #Sensex
first published: Aug 27, 2021 12:58 pm