Promoters of these 8 companies reduced share pledge in Q4; what should investors do?

The rise in promoter pledge does raise an alarm but if the management, governance, and fundamentals of a company are strong then an investor must not worry whilst hold such stocks, suggest experts.

The value of promoter pledge in companies under coverage for the quarter ended March stood at Rs 1.58 lakh crore as compared to Rs 2.13 lakh crore in the previous one, but there are 8 stocks which saw an increase in promoter pledge during the period, Edelweiss Securities said in a report.

The Nifty50 remained volatile throughout the March quarter which began from January to March. The Nifty50 hit a record high of 12,430 on January 30, and since then it moved in one direction and that was south. The index was down 30 percent in the March quarter.

Amid weak global cues and outbreak of COVID-19, promoters as well as the financial institutions have been cautious in using pledge for funding requirements on the back of extreme market volatility.

Why do promoters pledge shares? Pledging by promoters is a way to raise money (either for personal purpose or for the company) against their holding in their companies from various financial institutions, wherein the promoters’ shares act as collateral.

Note: The list is from Edelweiss Securities' coverage universe

The rise in promoter pledge does raise an alarm but if the management, governance, and fundamentals of a company are strong then an investor must not worry whilst hold such stocks, suggest experts.

“These are difficult times of liquidity mismatch created by force majeure event of COVID-19, hence, they must stay put must not dispose at loss,” Sumit Kochar, Senior Wealth and Transaction Advisor, Findoc told Moneycontrol.

“The stocks include names like Max Financial, Emami, Kalpatau Power, Laurus Lab, Wockhardt, Jindal Steel, and Granules India and these are some companies which will sail through these difficult times shortly as the balance sheets and business fundamentals have become strong in the past years,” he said.

The outbreak of pandemic COVID-19 has adversely affected the Indian economy, and banks are reluctant to lend even though there might be enough liquidity in the system.

Thus pledging of shares to raise finances for the operations of the company is not a bad practice per se, but analysts still advise caution.

“In a volatile market scenario and in cases where the business is facing a slowdown due to various reasons, stock prices of the companies may start falling,” Ajit Mishra, VP Research, Religare Broking told Moneycontrol.

“In many cases, continuous fall in stock prices may trigger the selling of shares by the lenders thereby further bringing down the stock price. Thus shares of companies with high pledged promoter holding tend to witness higher volatility,” he said.

Mishra further added that if pledged shares are more than 50% of the total promoters’ holding it should be viewed as a warning sign by the investors.

Fall in Promoter Pledge: worth a buy?

On the other hand, there are eight companies where promoters have revoked pledged shares during the quarter were Torrent Pharma (0% vs. 36.49%) and Apollo Hospital (36.66% vs. 67.33%), Edelweiss data showed.

Other notable names that have seen fall in promoter pledges on a sequential basis include names like Zee Entertainment, SPARC, Bombay Burmah, United Spirits, Asian Paints, and Tata Steel.

Experts are of the view that a fall in promoter pledge is a good sign, but investors should also study other fundamentals of the company before making investments. If you already hold the stock then it is best to keep holding while fresh investment can be considered on dips.

“A promoter releasing the pledge is definitely a good sign but the investor must look at other fundamentals of the company before investing. It is not advisable to make the investment decision only looking at promoter pledge,” Atish Matlawala, Senior Analyst, SSJ Finance & Securities told Moneycontrol.

“From the companies given in the list are bullish on Torrent Pharma, Bombay Burmah, United Spirits, Asian Paints, and Tata Steel,” he said.

Mishra of Religare Broking is of the view that a fall in the promoter pledge is a good sign, however, it should be the only thing to look at while selecting stocks. “Amongst the mentioned names and given the current market scenario, we believe Asian Paints and Apollo Hospitals are fine for investment on dips,” he added.

Other factors to track:

A rise or fall in promoter holding is one factor which one should consider while making a buy or sell decision, but at the same time investor must also look at the fundamentals of the company, future prospects of the company and level of corporate governance, suggest experts.

“One should ascertain that the company has prudent management, strong corporate governance, and healthy financials with long term growth visibility. Further, lower debt to equity ratio and strong balance sheet should also be looked at before buying or selling any stocks,” says Mishra of Religare Broking.

During these times of huge volatility an investor must be very careful in choosing stocks taking note of both quantitative, and qualitative traits of a particular stock before investor his/her limited cash reserves, say experts.“For quantitative traits, it is suggested to deliberate over dividends issued, debt to equity ratios, EPS, Revenue, Operating Cash Flows, P/E Ratio, and Intrinsic Value of such stock,” says Kochar of Findoc.

“On the other hand, it is quintessential to examine the qualitative traits of the stock as well whilst pressing a buy decision button on a stock such as the business fundamentals of the company, sustainability, management of the company, Corporate Governance, dividend policy, market volatility, key personnel of the company and technical charts of a particular company,” he said.

There are as many as 21 companies that have a pledge value of more than Rs 1000 cr that include prominent names like TCS, Asian Paints, Jindal Steel, Max Financial, and IndusInd Bank, etc. among others. 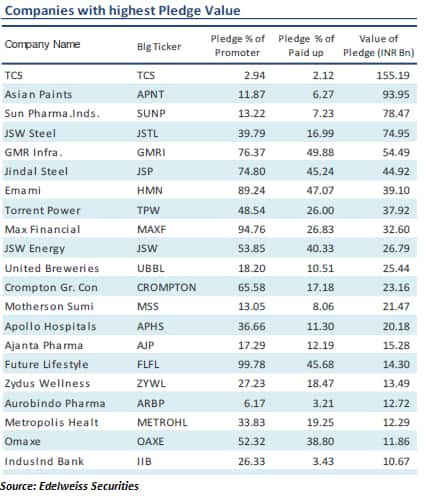