Oil heads for worst losing run since 2020 on slowdown concerns

West Texas Intermediate, which traded above $92 a barrel after tumbling on Tuesday, has shed more than 6% in August, hitting the lowest since January mid-month.

Oil headed for a third monthly drop, the longest declining streak in more than two years, on prospects for slower global growth as central banks tighten policy and China presses on with its Covid Zero strategy.

West Texas Intermediate, which traded above $92 a barrel after tumbling on Tuesday, has shed more than 6% in August, hitting the lowest since January mid-month. In the US, the Federal Reserve has been raising rates aggressively to quell inflation, while Europe is gripped by an energy crisis that may herald a recession. In Asia, growth in China, the top oil importer, has slowed. 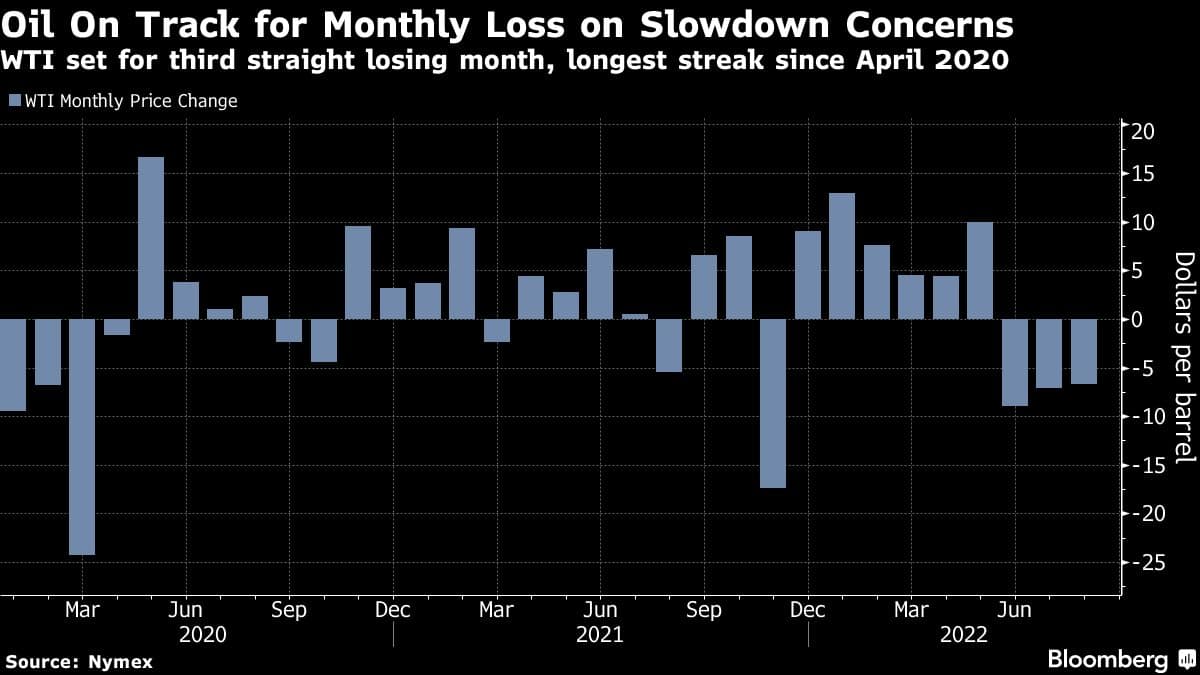 Traders are also tracking an array of supply-related issues. While there has been significant unrest in both Libya and Iraq in recent days, oil output in both OPEC members appears to be unaffected so far. Separately, talks to revive an Iranian nuclear deal that may unlock greater crude exports have dragged on.

Oil’s decline in August marks the latest chapter in what’s been a tumultuous year, with prices driven higher in the first half by Russia’s invasion of Ukraine, then undermined as central banks shifted tack and Moscow managed to keep most exports flowing. Crude’s recent slump prompted OPEC+ heavyweight Saudi Arabia to raise the possibility the alliance could cut output, although Russian media reported the grouping wasn’t discussing such a move at present.

Commodities including oil have also faced a headwind this month from gains in the dollar, which makes raw materials more expensive for holders outside the US. The Bloomberg Dollar Spot Index has climbed more than 2% in August as the Federal Reserve commits to higher interest rates, with the gauge approaching a record high that was hit in July.

Key time spreads suggest that tightness in the crude market has eased. WTI’s prompt spread -- the difference between the two nearest contracts -- was 47 cents a barrel in backwardation, compared with $1.87 a month ago.

An insight into market conditions in the US will come later Wednesday when the Energy Information Administration issues its weekly analysis of supply and demand. On Tuesday, the American Petroleum Institute reported a modest build in nationwide oil holdings, although there was a drop at the key storage hub in Cushing, Oklahoma, according to people familiar with the figures.
Bloomberg
first published: Aug 31, 2022 07:17 am