Majority of the analysts on Dalal Street have a ‘buy’ call on these stocks, with a potential upside of 26-64 percent over the next 12 months.

India’s mutual fund (MF) managers were major buyers of new-age stocks in November even as investor angst against such companies continued to rise because of a sharp decline in their share prices over the past year.

Mutual funds were net buyers of new-age technology stocks to the tune of Rs 2,139 crore in November, data compiled by Prime Database showed.

Mutual funds invested a large chunk of money in shares of Nykaa, PB Fintech, Delhivery, and PayTM, which suggests that fund managers took advantage of large block trades in those counters during the month following the expiry of the lock-in period of pre-IPO investors of these companies.

Delhivery saw the largest chunk of the buying as MFs net bought Rs 839 crore worth of shares from the market in November. Delhivery’s shares plummeted 11 percent for the month after the expiry of its lock-in period on November 19 but recouped most of the losses aided by buying from domestic MFs. 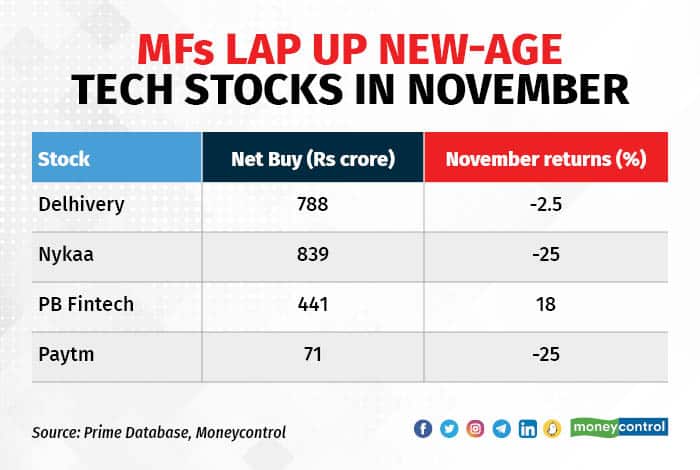 Buying by MFs was not enough to stem the slump in shares of Nykaa, which nosedived 25 percent in November because of large selling by some of its pre-IPO investors. Domestic MFs were net buyers of Nykaa’s stock to the tune of Rs 788 crore during November.

PB Fintech, operator of PolicyBazaar, also saw buying worth Rs 441 crore from MFs last month as fund managers took advantage of large exits by pre-IPO investors of the company after the lock-in period ended on November 10.

Shares of new-age firms, which have seen more than 50-70 percent value erosion since listing in 2021, had started to look attractive to long-term investors of late. Mutual funds such as ICICI Prudential AMC had started to nibble at some new-age firms because of improving growth prospects and palatable valuations.

“I think domestic institutional investors are definitely seeing value in many of these stocks,” said Naveen Kulkarni, Chief Investment Officer at Axis Securities.

Fund managers believe that the outlook for new-age companies should continue to improve given that  most are in a good place with valuation being their only challenge.

India’s new-age firms had their moment in history following fabulous IPOs last year but quickly became a symbol of angst as many of them suffered heavy losses in market value.

Many of these firms shifted their focus to becoming profitable even at the cost of shaving a few percentage points from their growth rate after a backlash from investors following the steep decline in share prices.

Companies such as PayTM and PolicyBazaar have indicated operating profitability some time in 2023, a first in their history. Nykaa’s better-than-expected gross merchandise value (GMV) and gross margin performance in the September quarter has helped improve sentiment, while Delhivery recently told analysts that it sees growth rebound in 2023. Analyst outlook for several new-age companies has improved over the past month with 26-64 percent potential upside for Nykaa, PB Fintech, Delhivery, and Paytm over the next 12 months.

Majority of the analysts on Dalal Street have a ‘buy’ call on these stocks, according to data available on Bloomberg, suggesting that the worst of the value erosion may be over.

(Disclaimer: The views and investment tips expressed by experts on Moneycontrol are their own, and not that of the website or its management. Moneycontrol advises users to check with certified experts before taking any investment decisions.)