The Nifty, much like in the November series, also started on a flattish note for December expiry, and was in a consolidation phase throughout the month.

In December expiry, the Nifty series closed with a minuscule gain of around 0.08 percent, while the Bank Nifty also closed on an absolute flattish note on the other side with a gain of just 0.05 percent.

The Nifty and the Bank Nifty has seen a decent amount of long addition throughout the December series, and we feel most of them have got carried forward to the next series.

On the FII front, the data continues to be positive throughout the November and December series. Currently in Derivatives, they are net long in Index Futures with around 23,000 contracts and they have rolled over more longs than short positions in the next series.

In the cash market, after the close of Aramco IPO, they once again turned net buyers in December, and have so far bought Rs 2500 crore of equity on net basis.

The put-call Ratio (PCR) have also started on the lower side at 1.31 level, which is a positive sign for the market. The volatility index continuously inched lower and is currently at sub-11 levels, indicating there is not much of volatility market is expecting in the January month.

On the other hand, the Nifty is starting the new series with a multi-year low Open Interest of 1.23 crore shares, and with such a low Open Interest, we have seen in the past it is difficult for the market to go down. Hence, keeping in mind the data above, we feel that after consolidation the market is now ready to inch higher and make new lifetime high at around 12,500-12,600 before the February Budget.

Nifty January month rollover was at 70.44 percent versus 79.64 percent. 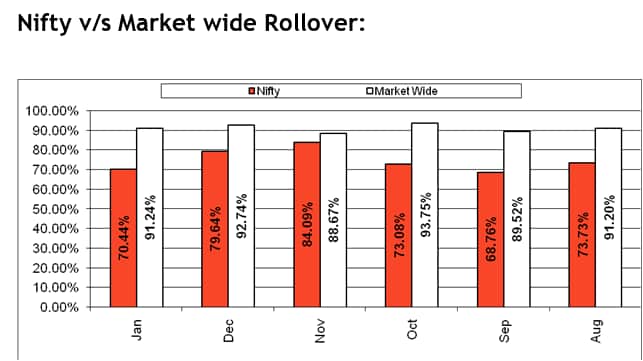 (The Author is Deputy VP – F&O at Sharekhan)