Live: Stock Market Live: Sensex @60,000: Are We Looking At A New Bull Run?
you are here: HomeNewsBusinessMarkets

Looking for multibagger returns? Ten turnaround stories which gave up to 200% return in 1 year

Analysts are betting on turnaround stories in March quarter as well and they have a logical reasoning for that. Many stocks have rallied in anticipation of earnings recovery and if India Inc. manages to perform in line with market expectations – many companies will get rewarded.

Rebound in earnings is the biggest factor highlighted by most experts which could make a break the rally in Indian markets. If we look at stocks which have a turnaround on a year-on-year (YoY) basis in December quarter 4 out of 10 stocks have more than doubled investors’ wealth in the last one year.

A turnaround company is a company which is on a verge of financial recovery. A company which was into losses over a period of time due to various reasons like higher operating expenses or higher financial expense which did not allow the bottom-line to expand.

For a turnaround to happen a company must acknowledge these costs and should try to minimize them in-order to expand its bottomline. For example, Ashok Leyland in the year FY13-14 sold its non-core assets to payoff its debt which resulted in doubling of the share price in no time. “Though falling of crude prices plays a vital role in generating profits but Mr. Sing took this opportunity to pay-off its debts which again lead to an expansion of profits,” he said. “It holds utmost importance as the investors can make easily double their wealth in a short span of time probably a year against the benchmark returns of 12-15% in the same period,” he said.

Analysts are betting on turnaround stories in March quarter as well and they have a logical reasoning for that. Many stocks have rallied in anticipation of earnings recovery and if India Inc. manages to perform in line with market expectations – many companies will get rewarded.

If history is any indicator, many companies which have shown turnaround or in other words turned profitable, got rewarded by markets. Almost 4 out of 10 companies more than doubled investors’ wealth in the last one year which includes names like Rain Industries, Lakshmi Energy, C&C Construction, and Polyplex Corporation. 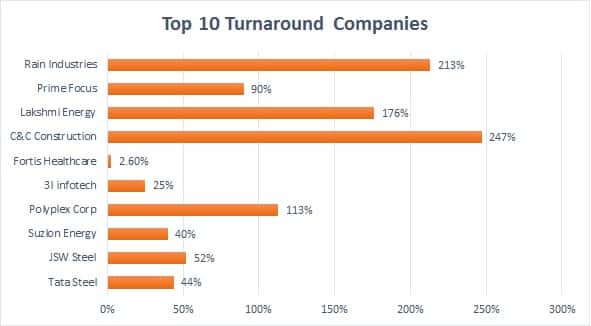 “Typically, turnaround companies are led by a change in management or change in business cycle. Had companies been impaired severely due to demonetisation in Q3 FY17, then March quarter could have been seen as a quarter to reckon with for turnarounds. IT, Pharma may slowly get into value zone,” Shashank Khade, Director and Chief Equity Advisor at Entrust Family Office Investment Advisors told Moneycontrol.

“Any minor incremental turnaround in such sectors in the coming quarters could re-rate the entire sector. Unorganised to Organised demand swing post-GST could lead to a positive surprise in many companies in FY19 and beyond,” he said.

He further added that CY16 was a year of turnarounds in commodity stocks which had plummeted severely in CY15. There is a need to search for potential turnarounds in other sectors.

How to spot a turnaround company?

It is worth investing in a turnaround company but the hard part is to spot one. Financial performance is one indicator but seasoned investors make money if they are able to buy the stock at lower valuations.

“Spotting a turnaround at the right time is important. Otherwise, one may enter at a very late stage and the returns may not be extraordinary. On the other hand, too early an entry could also mean that the turnaround may not happen or may fail,” Deepak Jasani, Head - Retail Research, HDFC securities told Moneycontrol.

“Hence, investing in such stocks needs acumen and experience of reading/knowing about past turnaround companies and how those companies overcame the hurdles in their way. The risk involved in this activity is more than adequately rewarded if proper due diligence is done by the investor beforehand,” he said.

Investors must lookout for such companies in the March quarter and there will be plenty. Leverage is an important component in company’s balance sheet. On one hand, it let the company increase its production but too much of debt strain the finances of the company.

Fortunately, at a time when costs are rising across the world, India could witness fall in interest rates which could help companies pay off their debt as well as expand capex plans.

“We feel many companies would be able to pay-off their debts in low-interest rate regime. We also feel the commodity cycle has bottomed out, and demonitisation has given an edge to the organized sector over the unorganised sector,” said Goel of Bonanza Portfolio Ltd.

A fall in crude prices and starting of government capex will give opportunities to the listed companies to generate revenue, said Goel. The quote “Turnarounds seldom turn” can be hold wrong and if investors can grab the opportunity then turnarounds do turn! he explains.

It is worth investing in turnaround companies, but there is an element of risk because turnaround can take much longer than anticipated. Such stocks could languish and correct beyond expected worst case scenarios.

“The trigger for turnaround needs to be identified well by investors. A company with weakening fundamentals could get worse before it gets better. Needless to say, it is darkest before dawn,” explains Khade.

“In such situations, disbelief in investors about these companies is at its peak. Hence such investments could take longer to render returns, which is a potential opportunity cost,” he said.