Asahi India and Indian Hotels show clear uptrend. Read on to know what Vidnyan Sawant of GEPL Capital suggests you should do with the stocks:

Since mid-October 2021, Nifty has shown price and time correction. The benchmark index, in the last week, breached its major support level of 15,650. Post that, prices have failed to move above 15,650 levels which is indicating the overall trend is on the downside.

On the indicator front, the relative strength index (RSI) plotted on the daily charts is sustaining below 50-mark and making lower high, indicating bearish momentum for the short to medium term.

Sapphire at its crucial support have shown a smaller base formation, which was preceded by a downtrend. The stock after a strong downtrend showed a higher high, higher low formation. Stock has finally given a break out from crucial support.

The stock has also shown a faster retracement of its last down move which took place with higher volumes and supported the breakout.

On the indicator front, the RSI has shown positive divergence. RSI is rising and managing to sustain above 50 mark.

Going ahead, we expect the prices to move at higher levels towards Rs 1,200, post which we might see a move towards Rs 1,300 levels. We recommend a stop-loss of Rs 925 on daily closing basis. Asahi India Glass has been following a clear uptrend and respecting the trend line since March 2020 lows. The stock on the daily time frame has given a breakout of Inverse Head and Shoulder with huge volumes while taking support from its crucial support.

On the indicator front, the RSI plotted on higher time frames is above 50 mark and rising, which indicates bullish sentiment in the stock.

We recommend a strict stop-loss of Rs 420 on daily closing basis. Indian Hotels showed a strong trend on the upside since April 2021 and respecting its trend line. The stock has shown positive action with high volumes on weekly charts. Currently we can spot change in polarity in the stock which is in sync with the uptrend at the levels of Rs 216.

On the indicator front, the RSI plotted on weekly time frame is above 50 mark, which indicates bullish sentiments.

We expect the stock to move higher towards Rs 260 and if it managed to cross above Rs 260 then eventually it will move towards Rs 300 levels.

One should maintain a strict stop-loss of Rs 200 on daily closing basis for this trade. 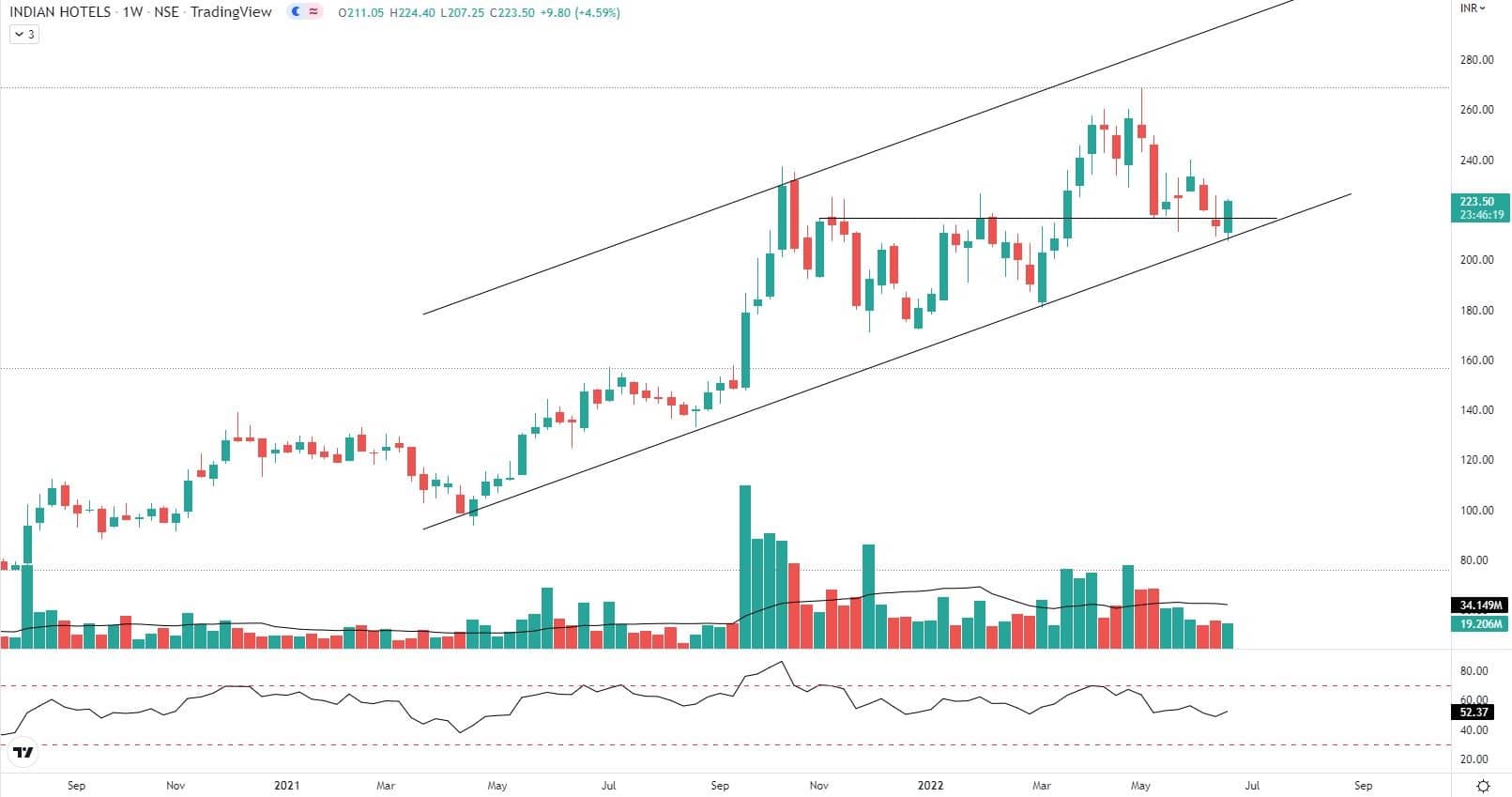