Hot Stocks | Here's why you should be on Crompton Greaves, United Spirits, Supreme Industries for short term

On the daily charts, Crompton Greaves has given a breakout of A-B-C pattern with volume confirmation which shows positive undertone of the stock for the short to medium term.

The Nifty has breached and closed below its major support of 16,400 mark which shows negative sentiments of the market. On the monthly charts, the index has sustained near its six-month low for the first time since March 2020.

On the daily charts, the stock has given a breakout of A-B-C pattern with volume confirmation which shows positive undertone of the stock for the short to medium term.

On the indicator front the RSI (relative strength index) plotted on the daily time frame has sustained around the 50 mark with a higher top higher bottom pattern, indicating increasing bullish momentum in the prices.

Going ahead, we expect the prices to move higher towards the previous swing high of Rs 462 post which we might see a move towards Rs 512 levels. We recommend a stop-loss of Rs 370 on daily closing basis. On the weekly charts, United Spirits is sustaining at major support level of Rs 800 mark which coincides with Double Bottom pattern and CIP formation (Change In Polarity). Also the stock has formed Higher Top Higher Bottom formation. On the daily charts, the volume pick up can be seen in every rise in prices.

The risk reward ratio is very much favourable at this point of juncture.

On the indicator front, the RSI plotted on the weekly chart can be seen placed above the 50 mark and moving higher, indicating increasing bullish momentum in the prices.

We recommend a strict stop-loss of Rs 790 on daily closing basis. Supreme Industries has been taking strong support at Rs 1,870 – 1,900 levels since April 2021 and it has also formed Triple Bottom price pattern near that levels.

Although the broader market is showing negative strength in the recent times, the stock is forming Higher Top Higher Bottom pattern in the current week indicating bullish undertone of the stock for the short to medium term.

The RSI indicator plotted on the daily charts is giving positive diversion and sustaining around 50 mark and it has maintained higher top higher bottom formation indicating positive momentum of the stock.

We expect the stock to move higher towards Rs 2,465 and if it manages to cross above Rs 2,465 then eventually it will move towards Rs 2,690 level.

One should maintain a strict stop-loss of Rs 1,870 on daily closing basis for this trade. 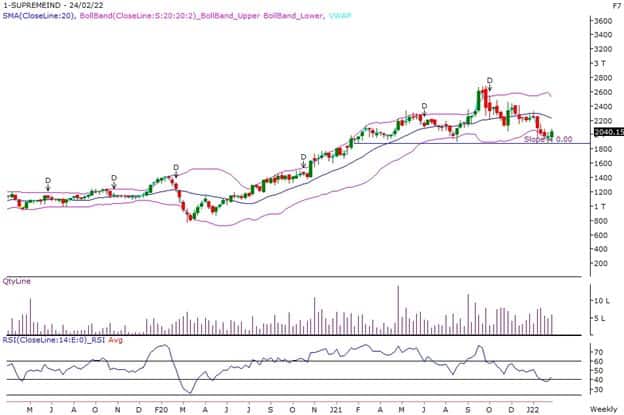