Once the stock manages to cross above Rs 2,200 levels, it may regain strength on the near-term chart and can scale up further towards Rs 2,250-2,300 in the short term, suggest experts.

The recent bullish crossover of moving average, or a Golden Cross pattern, formed on the daily charts of Reliance Industries (RIL) suggests that there is more upside of up to 10 percent in the offing in the short term, suggest experts.

Golden Cross is a bullish breakout that indicates a rally in the stock or the underlying. The most commonly used moving averages are the 50-period and the 200-period moving average.

“Barring the last 3 sessions, the June series did mark a revival in strength in the stock which was lacking since March series as the stock surged from Rs 2,000 level right from day one,” Sacchitanand Uttekar, DVP – Technical (Equity), Tradebulls Securities said.

“The recent pullback has been good and looks arresting around the Rs 2,080-2,050 zone. We have a classic Rising Three bullish formation on its expiry-on-expiry price scale with its monthly ADX retaining its strength above 28-30 zone which is a good sign of strength,” he said.

Uttekar further added that it is likely that the stock post the event may witness some stable price action going forward & reverse its trend towards the Rs 2,300-2,360 zone soon.

Shares of RIL fell by over 5 percent for the week ended June 28 which was largely on account of profit-taking, suggest experts amid announcements made in AGM.

The company's Chairman Mukesh Ambani unveiled a Rs 75,000-crore green energy plan at its AGM on June 24 as he also laid out for the shareholders the growth path for the conglomerate’s telecom, retail and O2C businesses. Brokerage firms raised target price post the AGM. 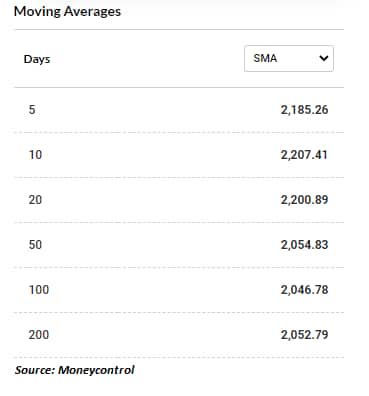 Reliance Industries witnessed profit booking last week and slipped below 20-days (SMA) which indicates that the stock may face some more pressure in the near term; however, the stock is in a bullish zone for the long term, suggest experts.

“One can use dips as a buying opportunity. The daily chart pattern suggests that the stock has important support around the 2050 level; however, on the higher side, 2150 -2200 are the resistance area,” Rajesh Palviya, VP - Technical & Derivative Research, Axis Securities said.

“Once the stock manages to cross above 2200 levels, it may regain strength on the near-term chart and can scale up further towards 2250-2300 in the short term,” he said.