668 percent return in 10 years, this 'compounding machine' is not done yet

Global brokerages are bullish on the stock, see it doing even better in the coming days

HDFC Bank is one of the brightest among the Indian banking and financial stocks, thanks to its asset quality and sizable market share.

After giving a 668 percent return in the 10-year horizon, brokerages think this compounding machine is set to scale new highs.

"Historically, HDFC Bank has been a compounding story, with the stock tracking earnings growth trajectory. The stock price and earnings per share (EPS) have both registered 20 percent CAGRs since FY2010," said global financial firm Morgan Stanley. "There are occasions when the stock price has not tracked earnings over one to two years, and buying the stock during these periods has historically generated outsized returns. We believe that the stock currently offers such an opportunity," Morgan Stanley added.

Morgan Stanley is of the opinion that HDFC Bank's loan growth will remain very strong for the next two to three years.

"Investment in technology and increase in rural penetration (organic and in partnership) should enable it to keep growing loans. There will be some quarterly volatility given the size, but the backdrop for the bank will keep growing at 18-20 percent," it said.

The weakness in Indian banking space was a blessing in disguise for the bank, as it made the competitive environment feeble, so the opportunity for market share gain remained intact, Morgan Stanley said.

"This was in line with the manner in which HDFC Bank has operated in the past. PPoP was up 29 percent year-on-year (YoY) which implied meaningful room for the bank to take higher credit costs and still generate profit growth of more than 20 percent," it said.

Terming HDFC Bank a "solid long-term play", Morgan Stanley has overweight view on the stock, with a target price of Rs 3,000.

While good funding franchise and low-cost deposits, around 40 percent of total deposits, were positives, Morgan Stanley identified sustained strength in loan growth and margins and acceleration in earnings growth in the coming quarters as the potential catalysts that would give it extra mileage.

"Earnings outlook of HDFC Bank is strong with CAGR at nearly 20 percent over the next three years. Compounding implies meaningful margin of safety for longer-term investors. Historically, the stock has done well over a 12-month period from current levels and we would expect similar performance," Morgan Stanley said. 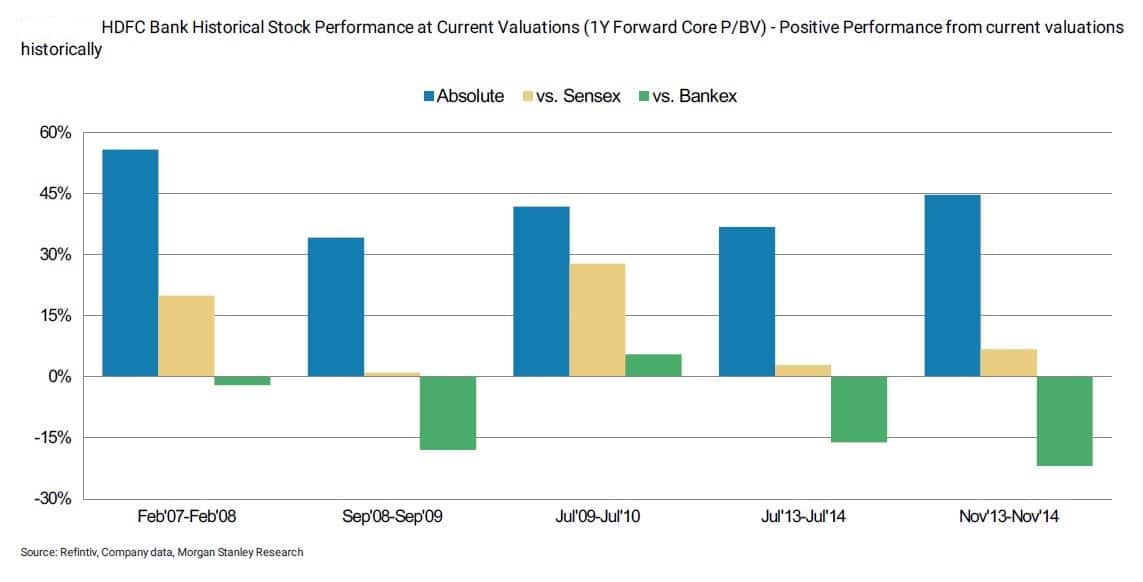 Japan's Nomura, too, sees the stock as an alluring investment opportunity. The brokerage has a buy recommendation, with a target price of Rs 2,600.

"We do not see any significant challenges to its ability to compound earnings and estimate 18 percent CAGR over FY19-21F," Nomura said in a recent report.

Disclaimer: The report is the compilation of information available on public domain and Moneycontrol.com does not claim for their exclusivity. Moneycontrol.com advises users to check with certified experts before taking any investment decisions.