Explained: Why pre-packaged insolvency resolution is great for MSME borrowers

Under the pre-packed framework, which will take effect through a government ordinance, MSME borrowers can retain control of the firm and negotiate a settlement with lenders without going through the entire IBC process. That saves time and money.

The government has introduced an ordinance for a pre-packaged insolvency resolution process for micro, small and medium enterprises (MSMEs). What does it mean and how is it different from a regular Corporate Insolvency Resolution Process (CIRP)?

To begin with,  what is a typical IBC (Insolvency and bankruptcy code) process?

Under this, a stressed borrower is taken to the bankruptcy court by creditors for a time-bound resolution. The resolution happens by auctioning the company to an investor via a competitive bidding process.

The original promoter cannot bid for the asset under this mechanism. The moment a company is admitted to the NCLT, control goes to a resolution professional (RP), who acts as an administrator throughout the process till the company is sold to a bidder, facilitating banks to recover their dues, typically with a huge haircut (losses on the outstanding loan amount, typically in the range of 50-60 per cent).

What is the problem in this model?

It is time consuming and costly for all parties involved. The problem is that the whole IBC process takes around six months and can go up to 270 days in many cases. Such a lengthy process is time consuming and costly as it involves legal fees and the likelihood of further erosion of the asset’s value. The company becomes even more stressed during this period and there won’t be much for the lenders to recover at the end of it.

As against this, a pre-packed insolvency framework means the stressed borrower can prepare a plan for either settlement to secured creditors or resolution, which could involve the sale of the company to an investor — before going to the IBC court.

In other words, it is a kind of restructuring that the borrower is allowed to benefit from with the approval of the creditors, without having to go through the lengthy and costly IBC process. Importantly, the borrower can retain management control till a resolution is arrived at.

Is there is a possibility for the borrower/original owner to get back the control of the firm?

Yes. If the borrower feels confident that he can turn around the company with some help from the lenders (either through a one-time settlement or other type of restructuring plan by elongating the repayment period/reducing interest rate etc), the borrower can make a plan of his own to get back control of the firm.

Else, the borrower can bring in an external investor to help with the resolution or for an outright sale. Once the plan is agreed by the secured creditors and investors, the borrower and the creditors can take the plan to the NCLT court for its final approval.

But, will NCLT court prefer the pre-packaged deals?

Ideally it should. For the NCLT, pre-packs will be a welcome proposition as they ease its burden. The tribunal has been flooded with a number of IBC cases, putting pressure on the NCLT infrastructure. After all, goal of the IBC mechanism is speedy resolution. Pre-packaged deals are even quicker than the traditional CIRP process. So, the NCLT will be more than happy to put its stamp on the deal.

How does the borrower gains in this model?

For the borrower, the pre-packed insolvency deal makes immense sense as it helps the MSME borrower retain control of the enterprise till a settlement is reached. This increases his chance to regain control of the company through a resolution process or by getting an investor on board. In typical IBC cases, the borrowers do not have a role once the case is admitted in the NCLT court. Also, the borrower’s legal cost is significantly reduced under this mechanism. 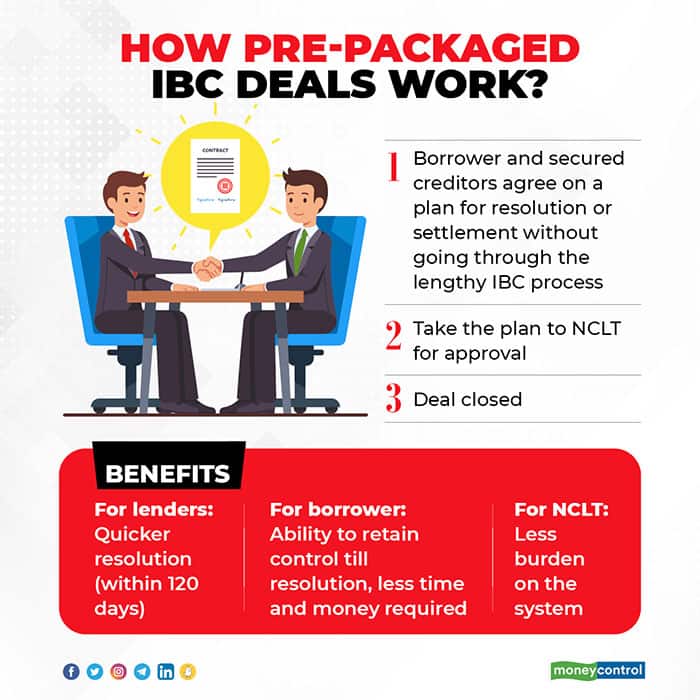 For lenders, this will be good news, too, as resolution typically happens faster — the pre-packaged insolvency resolution process needs to be completed within 120 days from the commencement date. To sum up, the borrower gets the benefits of a traditional restructuring under pre-pack deals.

Did India have pre-packed deals before?

Pre-packed deals are new in India whereas in countries such as the UK and the US, such deals are common. “This is the equivalent of Chapter 11 in the US and is a good scheme to implement here,” said RK Bansal, Managing Director of Edelweiss ARC and a former executive director of IDBI Bank. “Instead of going through the full IBC Process, which is time consuming and costly, in the pre-pack, the borrower gets to retain control without letting control go to an RP, and make a plan for resolution with the approval of lenders and get final approval from the NCLT,” said Bansal.

Will bigger companies too get pre-packed deals?

For now, pre-packed deals are given only to MSMEs and not to other companies. One problem is that banks don’t typically take many MSMEs to IBC courts as the loan value will be typically lower. Most IBC cases involve medium and large companies. Will the Government extend the benefit of pre-packed deals to bigger companies as well? Time will tell.