India FY21 GDP contracts 7.3%, much improved than govt's own forecasts

The 2020-21 GDP contraction is much better than the forecasts of the Reserve Bank of India and the Ministry of Statistics and Programme Implementation, both of which had expected GDP for the full year to contract by 8 percent.

For the year, however, the manufacturing sector has contracted by 7.2 percent while construction has been shrinked by 8.6 percent.

India’s gross domestic product (GDP) for COVID-hit 2020-21 contracted by 7.3 percent, even as GDP for the year’s last quarter (January-March 2021) grew by 1.6 percent, official data released by the National Statistical Office showed on May 31.

This contraction is much better than the forecasts of the Reserve Bank of India (RBI) and the Ministry of Statistics and Programme Implementation (MOSPI), both of which had expected GDP for the full year to contract by 8 percent. Most analyst estimates were in the 7-8 percent contraction rate.

Once again the primary driver was the agriculture sector, as manufacturing, construction and services also showed improvement quarter-on-quarter (QoQ).

This was the first yearly economic contraction since 1980-81 and the largest since the calculations of national accounts began in the early 1950s. Most of the damage to the economy was done in April-March quarter, when GDP had contracted by an unprecedented 24.4 percent due to the nationwide lockdown. 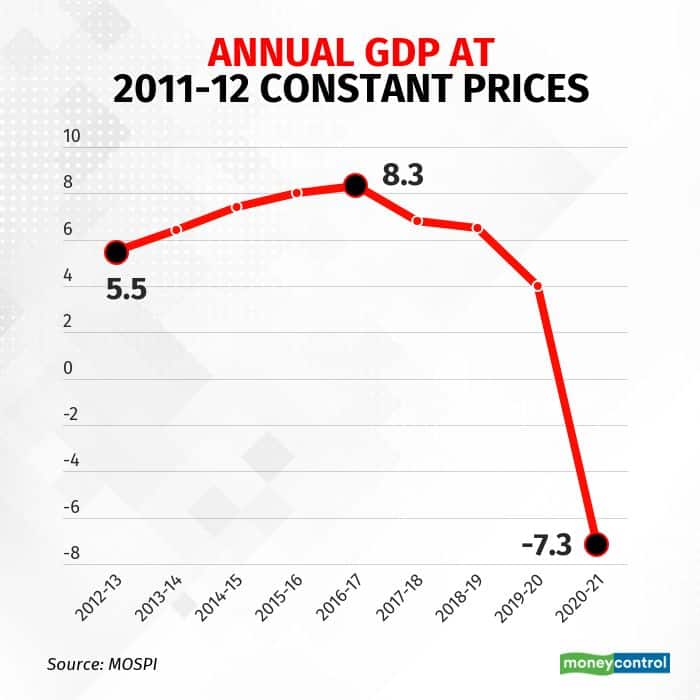 The economy had since recovered to contract by 7.3 percent in the July-September quarter and showed a slight growth of 0.4 percent in the October-December quarter. The latest fourth quarter GDP data carries forward that trajectory of GDP recovery.

“The provisional estimates for 2020-21 have signalled some positive cheer for the policymakers. The 2020-21 real GDP growth has done better than the earlier estimates. This became possible due to a better than expected performance in January-March quarter," said DK Srivastava, Chief Policy Advisor at EY India.

Additionally, with fiscal deficit data for April 2020-March 2021 also released on May 31, it can now be calculated that fiscal deficit for last year came in at 9.3 percent of nominal GDP, compared with revised estimates of 9.5 percent. Faced with massive tax revenue shortfall, inability to carry out privatisation and increased expenditure commitments due to the COVID-19 pandemic, Finance Minister Nirmala Sitharaman had revised the fiscal deficit target from 3.5 percent of GDP seen earlier.

"Construction and Manufacturing activities seemed to have picked up faster in the last quarter of FY21 while the services sector continues to suffer the most. The better than expected GDP estimates provides some comfort to the RBI MPC, which is likely to maintain the repo rate at 4 per cent in its upcoming meeting," said M Govinda Rao, Chief Economic Advisor at Brickwork Ratings

As other major drivers of the economy slumped into contraction in at least two of the preceding three quarters of 2020-21, agriculture remained the only bright spot. In the fourth quarter of 2020-21, the sector registered a growth of 3.1 percent.

It had shown a rise of a rise of 3.5 percent in the lockdown-hit first quarter, 3 percent in the second quarter and a revised growth of 4.5 percent rise in the third quarter. For the full year, agriculture sector grew by 3.6 percent.

For the year, however, the manufacturing sector has contracted by 7.2 percent while construction has been shrinked by 8.6 percent.

Services, which includes trade, hotels, transport, communication and broadcasting, remains the worst-hit by the COVID-19 pandemic. It contracted 18.2 percent for the full year and (-)2.3 percent for the January-March quarter. Household Consumption a cause of concern

Real Gross Value Added (GVA) for the year, from all the sectors combined, contracted 6.2 per cent. Meanwhile, nominal GDP (GDP at current prices) shrunk by 3 per cent. For the January-March quarter, these respectively grew by 3.7 per cent and a whopping 8.7 per cent respectively.

On a year-on-year basis, the most discouraging trend was seen in Private Final Consumption Expenditure (PFCE), which indicates household spending in the country and is a significant component of GDP

PFCE contracted by an annual 9.1 percent to Rs. 75.6 lakh crore in FY21 down from Rs. 83.2 lakh crore in FY20.
This was the lowest in India’s history from FY51, said Devendra Kumar Pant, chief economist at India Ratings and Research, said. "The previous lowest PFCE growth was negative 2.2% in FY80," he added.

In its release MOSPI said that the measures taken to contain spread of the Covid-19 pandemic have had an impact on economic activities as well as on data collection mechanisms.

"There have been disruptions in data flow from some source agencies leading to data coverage issues. The limitations in the datasets and the timeliness have a bearing on the GDP estimates and its subsequent revisions," it said.

"Estimates are, therefore, likely to undergo sharp revisions in due course, as per the release calendar. Users should take this into consideration when interpreting the figures," MOSPI added.
Arup Roychoudhury
Tags: #Covid-19 #Economy #GDP #gross domestic product #India
first published: May 31, 2021 05:33 pm