How a currency war can help China neutralise US tariffs

China is the biggest export economy in the world. By allowing its currency to depreciate, Chinese goods will become cheaper in foreign markets.

On March 1, Donald Trump raised the import tax on steel and aluminum, firing the first shot in what could be a protracted trade war. Only 6 percent of American imports of the aforementioned goods come from China, but the message was clear.

China has been in the cross hairs of American foreign policy after Trump’s ascension to the White House. With a larger basket of goods coming under Trump’s import tax umbrella, China has replied in kind with counter-tariffs. However, from a Chinese perspective, tit-for-tat tariffs aren’t the only option on the table. China could dampen the impact of tariffs by allowing its currency to weaken.

The yuan has depreciated 7.81 percent since March 1. Unlike equities, even slight changes in the value of a currency can have ramifications on the local economy, and also global trade. This is the biggest slide in the value of the yuan since 2015. Given that Trump is ratcheting up rhetoric on increasing punitive tariffs, China can offset the deficit by manipulating its currency to make exports cheaper. Conversely, a weaker yuan will make American imports more expensive. This could reinforce the impact of Chinese tariffs on US goods.

How will a weaker yuan impact Chinese exports?

China is the biggest export economy in the world. By allowing its currency to depreciate, Chinese goods will become cheaper in foreign markets. For example, consider the situation where the People's Bank of China (PBOC) decides to lower the value of the yuan to 8 against the dollar, as opposed to the prevailing rate of 6.

Under the present regime, a smartphone that costs 2,400 yuan would retailed for USD 400 in the US market. If the currency rate is pegged at 8 yuan to the dollar, the same product with a price tag of 2,400 yuan will only cost USD 300. Therefore, triggering a currency war will only be to the benefit of China since exports will become more competitive, driving up volumes.

What is the downside of currency devaluation?

The yuan is not traded freely in the market like the dollar. A hard devaluation could incite herd behaviour among holders of the yuan and destabilise the economy. Chinese companies earn dollars for their wares sold in the export market. This is also true for foreign portfolio investors who have invested in the Chinese market. What investors do with their money depends on how the yuan stacks up against dollar. A drop in yuan means that it is overvalued. In other words, the market is demanding fewer yuan per dollar than the prevailing exchange rate reflects.

Currency devaluation is often a trigger for capital flight. Companies, fund managers, and retail investors exit countries before their currencies lose too much value. Multinational companies with operations in China will be wary of a devaluation on the lines of the Asian crisis of 1997.

It is for this reason that most countries prefer capital inflows through the foreign direct investment (FDI) route as opposed to foreign portfolio investment (FPI). Since FPIs are relatively liquid, investors can pull out funds if the vital signs of the local economy – including its currency – are sinking. On the other hand, FDI involves generating assets such as factories and infrastructure, the liquidation of which is a more complicated affair.

Does China have a reason to fear flight of capital?

Stockpiling foreign currency serves as an effective bulwark against capital flight. A country’s forex reserves comprise of the foreign currency held by its central bank. Exports are the main source of foreign exchange.

For example, Chinese exporters are paid in dollars, euros, or the currency of the country where their goods are sold. This money is transferred to China’s central bank, which in turn deposits yuan in the exporter’s account. Exporters then manage their expenses and pay employees in yuan.

Chinese banks usually purchase sovereign debt using the foreign currency earned from exports. Banks also hold a portion of their forex reserves in gold. A healthy forex kitty helps in stabilizing the local currency and gives the central bank leeway in maintaining its value within a desired range.

When China’s central bank ferrets away export dollars, the value of the yuan correspondingly adjusts to the deficit. In other words, the value of the dollar rises with respect to the yuan. Consequently, Chinese exports maintain their competitive advantage as they will be cheaper than American-made goods. Capital flight can prove to be disastrous for countries that have borrowed heavily, and do not have the forex reserves to protect their currencies from speculators. When foreign investors pull out, the local currency loses value, leading to inflation. However, China boasts low foreign debt and forex reserves amounting to $3.16 trillion.

In 2015, the last time when capital flight was a worry, China’s central bank devalued its currency on the back of forex reserves of $3.81 trillion. In context, the cumulative GDP of all African countries stands at $2.33 trillion. But China is more vulnerable now than in 2015. Forex reserves are relatively lower, while more foreign capital is circulating the financial system than before. China is largely self-sufficient with respect to the energy sector, but petroleum products account for around 12 percent of total imports. With global crude prices on the upswing, a weaker yuan will compound the woes of Chinese energy companies.

For instance, the price of crude was $50 to the barrel in January 2018, while the dollar/yuan exchange rate was 6.28. This means that 314 yuan could purchase one barrel of crude in January.

Fast forward to July. Economic sanctions on Iran and other extraneous factors have caused the price of crude to jump to $70. Chinese importers would have had to pay 439 yuan per barrel had the exchange rate remained the same as in January. However, with the yuan weakening to 6.76 against the dollar, the price of one barrel will go up by almost 8 percent to 473.2 yuan. The Chinese economy guzzles around 8.4 million barrels of imported crude every day. A depreciation in the value of the yuan can add a substantial amount to China’s import bill.

But Beijing has been stealthily loosening the United States’ stranglehold on the oil industry. Forbes reported in April that a pilot program is in the works that would enable China to pay for oil in yuan, as early as the second quarter of 2018-19. Russia and Angola, which are China’s top suppliers have reportedly been sounded out about the plan. This transition could cushion the adverse impact of a premium to be paid on imports on account of a weaker yuan.

Another worrisome factor in China’s import calculus is the dependence of its electronics manufacturing units on the imports of integrated circuits (ICs). Despite being the world’s largest manufacturer of consumer electronics, ICs accounted for 8 percent of China’s total imports.

Will devaluation lead to inflation?

Currency devaluation will cause the price of imports to go up. Most of China’s imports are raw materials for its industries. Imports are given a significant weightage in the calculation of the consumer price index (CPI). While slight changes in the value of currency can be absorbed by the system, devaluation of around 10 percent usually causes prices to rise by as much as 3 percent, according to an analysis by the Financial Times.

A case in point is the plunge in the value of the pound sterling following Britain’s exit from the European Union (EU). In the space of a week, the pound depreciated by 13 percent against the dollar. Consequently, inflation went up by 2-3 percent. Domestic prices of goods which have a direct bearing on the currency rate – mostly imports – shot up. Airline tickets become more expensive, as did tobacco and cell phones. 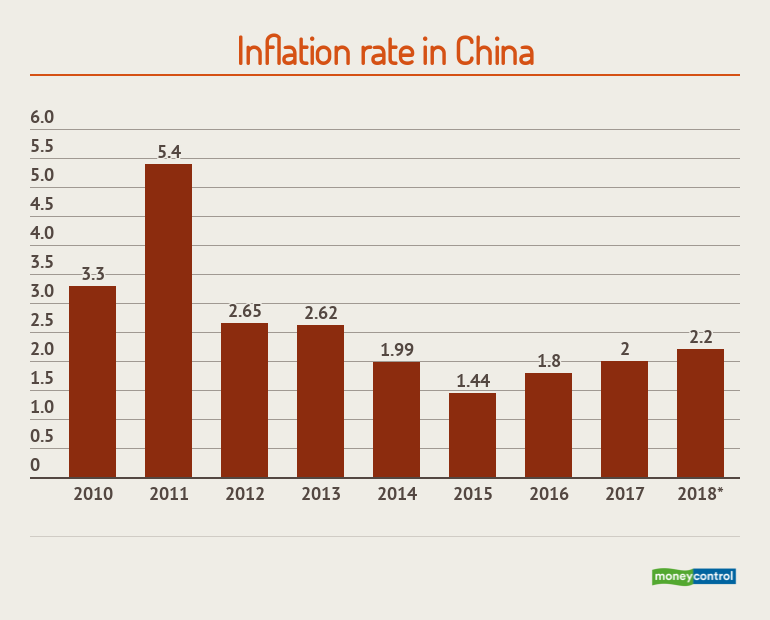 However, the relationship between devaluation and inflation remains uncertain. China presents a contrarian example to the post-Brexit frenzy on the part of currency traders. In 2015, the People’s Bank of China responded to fears of capital flight with a devaluation of the yuan. In spite of this, the inflation rate for 2015 was the lowest since the turn of the decade.