February IIP expands to 4.5% from 2% month-on-month

The manufacturing sector grew at 3.2 percent against a 1.5 percent month-on-month growth. Mining production grew 10 percent in February, against a 4.4 percent growth in January.

India's industrial output grew at 4.5 percent as against a 0.2 percent growth rate year-on-year, as per the Index of Industrial Production (IIP) data released by the government on April 9.

"Industrial growth recorded a broad-based and sharper-than-expected pickup to a seven-month high 4.5 percent in February 2020, suggesting that some parts of the economy were on the path of a gradual revival prior to the escalation of the COVID-19 outbreak," said Aditi Nayar, Principal Economist, ICRA.

The manufacturing sector grew at 3.2 percent against a 1.5 percent month-on-month growth. Mining production grew 10 percent in February, against a 4.4 percent growth in January. 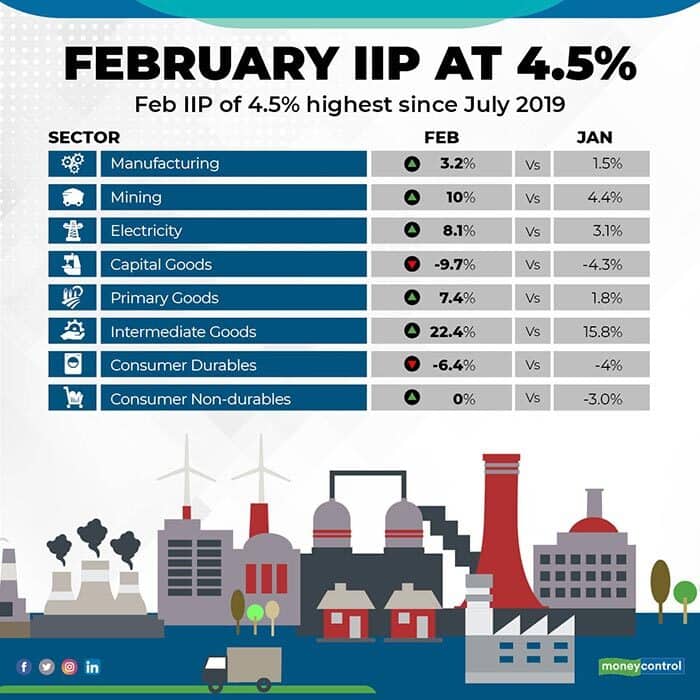 Consumer durables contracted 6.4 percent in February against a 4 percent contraction in January. Electricity production grew 8.1 percent in February against a 3.1 percent growth in January.
India's GDP numbers have confirmed fears of a deepening slowdown in the economy as households aren't spending enough to buoy demand and companies aren't adding capacities or hiring more.

This has been followed by the outbreak of COVID-19 and 21-day lockdown announced by Prime Minister Narendra Modi to control the spread, leading to huge disruption in activity across sectors. Small and medium scale businesses saw massive disruption with factories being shut down. Aviation, hospitality and tourism are some of the worst-affected sectors in the economy.

"... social distancing and lockdowns are likely to result in a considerable industrial contraction in March 2020, particularly in manufacturing and electricity, which would likely intensify in April 2020," Nayar said.

Government data projected that the manufacturing sector saw contraction of 0.2 percent in 2019-20 against -0.1 percent in Q2, while mining and quarrying would grow at 3.2 percent against 0.1 percent in the last quarter.

The Union Budget presented by Finance Minister Nirmala Sitharaman earlier this year projected a nominal GDP growth of 10 percent in the next fiscal, followed by 12.6 percent and 12.8 percent in FY22 and FY23, respectively.

"Even after the lockdown is lifted, demand for consumer discretionary items will take time to recover given the poor consumer sentiments in midst of job losses and pay cuts. Capital goods demand will also remain weak as businesses will be wary of capex in these uncertain times,” said Rajani Sinha, chief economist and head research, Knight Frank India.​