In a scorecard, Urban Company scored 8/10. Flipkart's Ekart scored 7/10 while Dunzo and Grofers scored 4/10 each.

Home-services marketplace Urban Company tops the list in India as far as working conditions among platform economy companies are concerned, according to the Fairwork India Ratings 2020 Report. The platform scored 8 out of 10.

Flipkart's subsidiary Ekart scored 7 out of 10 while Dunzo and Grofers scored 4 out of 10 each.

The report is spearheaded by the Centre for IT and Public Policy (CITAPP) at the International Institute of Information Technology Bangalore (IIITB), along with partners at the University of Oxford and the University of Manchester. Fairwork is an organisation that looks at highlighting best practices and worst practices in the platform economy. How are the platforms scored?

These platforms were ranked on the basis of five principles. These include fair pay (minimum wages), fair conditions (health and safety), fair contract (simple terms and conditions), fair management (clear communication between leaders and workers) and fair representation (right to organise, worker unions).

Each Fairwork principle is broken down into two points: A basic point and a more advanced point that can only be awarded if the basic point has been fulfilled. Every platform receives a score out of 10.

Platforms are only given a point when they can satisfactorily demonstrate their implementation of the principles. Fairwork also said in its report that failing to achieve a point does not necessarily mean that a platform does not comply with the principle in question; it simply means that they were unable to evidence its compliance.

How do these platforms score?

When it comes to fair conditions, the Fairwork report said that the advanced point was awarded to platforms that went beyond risk mitigation and took active steps to improve conditions for workers. Here, only Urban Company and Flipkart demonstrated sufficient evidence for this point. 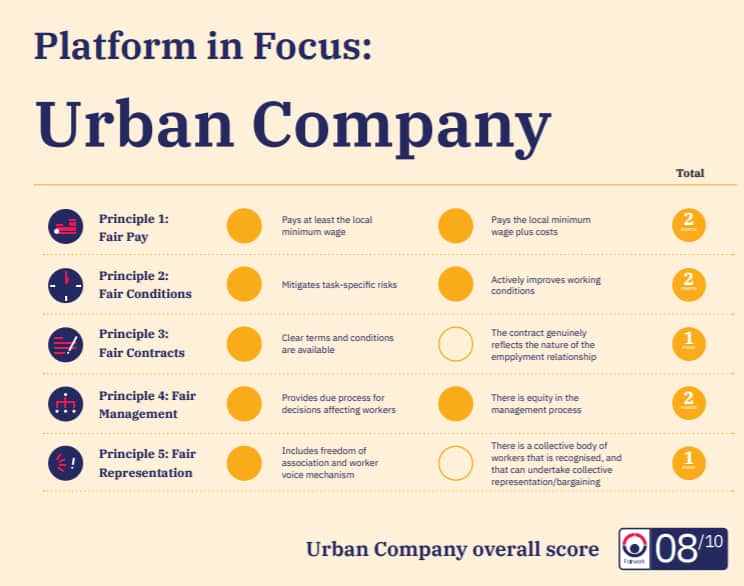 However, workers from the other four platforms (namely Ola, Swiggy, Uber and Zomato), were increasingly dissatisfied with the communication channels made available to them. The helpline numbers provided were either unresponsive most of the time or had premeditated responses.

Workers on these platforms added that ID blocks without warning were frequent, and that there was no documented process to appeal when they were blocked. There were also complaints that workers had to report the block at the platform hub in order to be unblocked, which effectively meant losing out on daily earnings and daily / weekly incentives.

When it comes to fair representation, the Fairwork report said that the basic point on this principle was awarded where there were worker voice mechanisms and freedom of association, and the advanced point where there is evidence of worker collectivisation being permitted.

For example, Urban Company conducted regular, face-to-face meetings with small groups of workers from each service category. These meetings were called and run by the management to take up worker concerns and facilitate a two-way conversation between workers and management.

The other was the monthly town hall meetings of Flipkart which brought together workers, team leads, HR staff and subcontractors. These meetings serve as a channel for workers to collectively express their opinion about various policies to the management.

The Fairwork report said that beyond these examples, there was no evidence of platform management supporting or acknowledging worker collectivisation.

Zomato, for example, blocked the IDs of several workers who participated in a strike. Additionally, the Zomato contract explicitly states that any partner who is found "indulging in acts such as creating ruckus / strike / or any activity against Zomato, which could be detrimental to the Zomato’s brand and its image" will be terminated.