172@29@17@242!~!172@29@0@53!~!|news|business|earnings|safari-ind-stellar-q1-buy-for-earnings-visibility-despite-the-run-up-2870991.html!~!news|moneycontrol|com!~!|controller|infinite_scroll_article.php!~!is_mobile=false
Subscribe to PRO at just Rs.33 per month. Use code SUPERPRO
you are here: HomeNewsBusinessEarnings

Investors should not expect a further multiple re-rating as the same has already played out. However, one should look to accumulate this company for the secular earnings growth in the medium to long term

Luggage companies appear to be in a sweet spot. After a superlative Q1 FY19 earnings from VIP Industries, its home-grown peer - Safari Industries India - reported a stellar showing as well.

Reduction in the Goods & Service Tax rate from 28 percent to 18 percent is an advantage for luggage companies given the dominance of the unorganised sector. Despite the dream run in the stocks, investors should keep an eye on this sector for their secular earnings appeal.

Safari witnessed strong traction in sales along with benefits accruing from operating leverage which resulted in an expansion in operating margin. 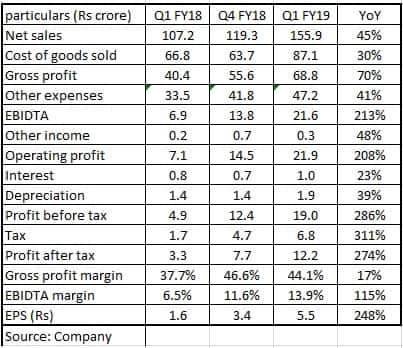 While Q1 is a seasonally strong quarter for the company, growth was exceptionally strong at 45 percent year-on-year. Rupee depreciation versus the dollar impacted gross margin, which declined quarter-on-quarter. The benefits of operating leverage kicked in due to strong traction in sales. Consequently, operating profit surged 208 percent led by significant margin expansion. Earnings before interest, depreciation, tax and amortisation (EBIDTA) margin stood at an impressive 13.9 percent.

Safari is the third largest player in the organised luggage market and has close to 10 percent market share. In addition to macro tailwinds, the company has an exciting road ahead as unorganised players are getting increasingly marginalised after implementation of GST, especially in the value segment, which is the forte of this company.

The company has become a serious challenger in the past few years, especially in the value segment, with its aggressive growth strategy. With the right product offering, the company is trying to cater to the change in consumer preference from heavier to light and wheeled travel products. Being a price competitive player, Safari should be able to wrench market share from the unorganised players in the post-GST era.

The products are tailored for all customer categories, suiting all possible occasions, but is currently dominated by soft luggage (above 70 percent). It recently launched polycarbonate and school bags. The management has aggressive growth ambitions and targets to become a Rs 1,000 crore company in the next 3-4 years. We have tweaked our estimates upwards in light of the strong Q1 performance. We expect earnings compounded annual growth rate (CAGR) of 69 percent between FY18 and FY20e. Why should investors still look at the company after the significant run up?Aided by macro drivers like GDP growth, rising personal income levels, changing lifestyles, huge middle class, availability of low-cost air fares and diverse travel packages, India is rapidly becoming one of the fastest growing outbound travel markets in the world. Domestic air passenger traffic has been consistently growing at a healthy clip.

Modern retailing and new fashion trends are also expected to drive sale of casual and travel luggage bags. Backpacks are a fast growing category, has a shorter replacement cycle and huge growth potential.

In addition to these above mentioned drivers, luggage has also become an important part of the wedding trousseau. The shift from the unorganised (close to 60 percent of the market) to organised players (dominated by three major players) is a trend that is here to stay.

Safari trades at 33.6 times FY20e earnings at a valuation similar to its closest peer VIP. Investors should not expect a further multiple re-rating as the same has already played out. However, one should look to accumulate this company for the secular earnings growth in the medium to long term.