Money spent during election time had increased spending and now with this loan waiver and other policies, the consumer sentiment will improve further and therefore spending will continue to improve, said Lalit Agarwal of V-Mart Retail.

With the Uttar Pradesh Government fulfilling its poll promise and deciding to give farm loan waiver of upto Rs 1 lakh to struggling farmers, stocks of companies like V-Mart Retail are rallying.

V-Mart Retail derives around 60 percent of its revenues from UP.

Chairman and Managing Director, Lalit Agarwal told CNBC-TV18 that the undercurrent at ground level has turned positive because a huge number of farmers will benefit from the waiver. Moreover, there are also other schemes and policies that would benefit people and farmers of UP.

Last fiscal, with two consecutive bad monsoons and hailstorm farm and rural income was impacted adversely, which in turn impacted the consumer sentiment and resulted in poor sales growth for the company, he said.

Money spent during election time had increased spending and now with this loan waiver and other policies, the consumer sentiment will improve further and therefore spending will continue to improve as well, said Agarwal. 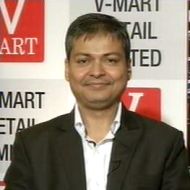 Alo the marriage season is on, and with farmers being able to sell their crop in coming months, it will increase spending, he added.

So, Agarwal is optimistic of seeing double-digit same-store sales growth (SSSG) at above 10 percent. He also sees an uptick in the average bill size, which was around Rs 670-680 in FY17.