172@29@17@241!~!172@29@0@53!~!|news|business|companies|cholamandalam-sees-npas-declining-cvs-to-receive-greater-focus-961167.html!~!news|moneycontrol|com!~!|controller|infinite_scroll_article.php!~!is_mobile=false
Subscribe to PRO at just Rs.33 per month. Use code SUPERPRO
you are here: HomeNewsBusinessCompanies

Everybody in the NBFC space has seen a decrease in cost of funds and the company per se has shifted their mix more towards debentures, said Vellayan Subbiah, Managing Director, Cholamandalam Investment and Finance.

The non-banking financial companies' (NBFCs) stocks have been outperforming now for over two years but over the last six months their performance has really shot up because from April 2016, yields have fallen resulting in lower cost of funds. Also, the money flow into the lower-end of the consumer segment is expected to drive demand for loans from NBFCs, as they are difficult to get from banks.

Speaking on the outlook for the sector and the company going forward Vellayan Subbiah, Managing Director, Cholamandalam Investment and Finance Company said everybody in the space has seen a decrease in the cost of funds and the company per se has shifted their mix more towards debentures.

“When we raise via debentures it is at least 100 basis points cheaper than term-loans for the same tenure, which has helped pricing,” he said.

So, cheaper money is good for the company since two-thirds of their loan book is fixed but that won’t result in an increase in net interest margins, he said, adding that their average NIMs have been on the higher point of the cycle. 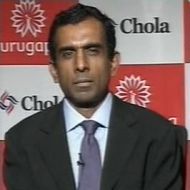 However, the non-performing loans going forward would see continuous decline.

The company is also in discussion to move into 90-day recognition of NPAs, which is likely to happen in the next 18 months, said Subbiah. Currently, the company is at 120-days.

The company is primarily focused on the loans to commercial vehicle segment; the HCVs. Subhiah said they now focus on the entire CV segment not just HCVs, as well as  passenger car on multi utility vehicle (MUV) segment side along with penetration in the used CV segment.

Outside of the heavy CV segment, there is growth in overall CV market and CV demand. So, basically the LCVs, tractors, used CV etc continue to grow, he said.

Below is the transcript of Vellayan Subbiah’s interview to Latha Venkatesh and Anuj Singhal on CNBC-TV18.

Latha: What about your own cost of money? Have you also been in this debenture raising spree? What was your cost of money last year, FY16? How much might it be in FY17?

A: Yes, definitely, everybody has seen a decrease in cost of funds. We have started shifting our mix more towards debentures and that is when we raise from debentures, it is basically at least 100 basis points (bps) cheaper than what we get from term loans for the same tenure. That is currently what is happening from a pricing perspective. So, obviously that is very favourable for us. That is one of the factors that has been working in our favour, not the only one, but definitely one of them.

Anuj: You are primarily in the vehicle finance though of course, off late the dependence has come down. Commercial vehicle (CV) market off late has seen a bit of a decline over the last 3-4 months. We see that in the numbers for example from Ashok Leyland. If you could tell us what is happening in that space?

However, that notwithstanding, we are fairly well spread across the entire CV segment and not just CVs, we work on the passenger cars and the multi utility vehicle (MUV) side as well. We also have a fair penetration in the used commercial vehicle segment.

So, not just us, but if you go outside the heavy commercial vehicle (HCV) segment, you are still seeing fairly robust growth in the overall CV market and CV demand. So, what you are seeing in terms of Ashok Leyland’s data is restricted to heavies and is driven by part of that base effect problem.

Latha: So, you mean your light commercial vehicle (LCV) loans have grown substantially?

A: You have both LCVs and you have the used CV business and getting into tractors, all of those segments continue to grow.

Latha: Speaking of credit growth, I am given to understand that a large part of your loans are on fixed rate. 67 percent is what our in-house analyst tells us. In that case, the cheaper money is going to mean higher margins. What will be the net interest margins (NIMs) for this year versus last year?

A: That is correct. So, definitely cheaper money is better for us because two-thirds of our loan book is fixed. We do not expect too much increase in NIMs because our NIMs are already fairly high. If you average over the cycle, we are at a higher point in our cycle. However, yes, that does translate into a higher NIM for us. I would rather not guide on specific numbers.

Latha: A guidance on NIMs is okay, I would think but what about non-performing assets (NPA)? You had shown a marginal 10 bps higher gross NPAs when you last reported numbers. Has that peaked? Your provisions came down, but how will the NPA picture look current quarter, next quarter and therefore, how much might provisioning eat up?

A: Definitely, we see on the commercial vehicle side, NPAs are now on a decline and they will continue to trend that way. So, that is a good news for us. We are having internal discussions as to when we will move to 90-day provisioning and so that will obviously create some kind of a spike in NPAs as well. It creates an increase, but it is more optics because basically, we will move to 90-day provisioning ahead of the Reserve Bank of India (RBI) requirement for us to do that.

Latha: When will you move, this quarter or next quarter?

A: We have not decided yet. We basically have another at least 18 months, so we have to decide. It is somewhere in the next 18 months, let me put it that way.

Latha: What are you now at, 180 days or have you moved at least to four months or something?

Anuj: Can you give an outlook on return on equity (ROE) because that has picked up a bit. Some of your peers have 25-30 percent. Of course, much smaller in base, but last quarter was 21.5 percent, last year was 16.7 percent. If you could give some analysis on that or some preview on that?

A: So, obviously, we are seeing an increase there. Just to guide you, it is not coming because of any specific change in leverage, but return on assets (ROA) are beginning to go up. We finished last year with a 3.6 percent pre-tax ROA and our belief is that with a decrease in cost of funds, slight decreases in operating expenses and like you said, some growth comes back into the market and lower credit losses, that number will start pushing upwards a bit. And so that will basically result in an increase in ROEs as well.

A: You are doing the maths on that.

Latha: You have to give us some guidance.

A: Basically, 20 percent is a tad high for where we will get this year, but it depends on how the second half plays out.

Latha: Just one number then, what might be your credit cost compared to last year?

A: Are you talking about net credit loss (NCL)?

A: I would say, NCLs will probably be in the range of 20-30 bps lower than last year.